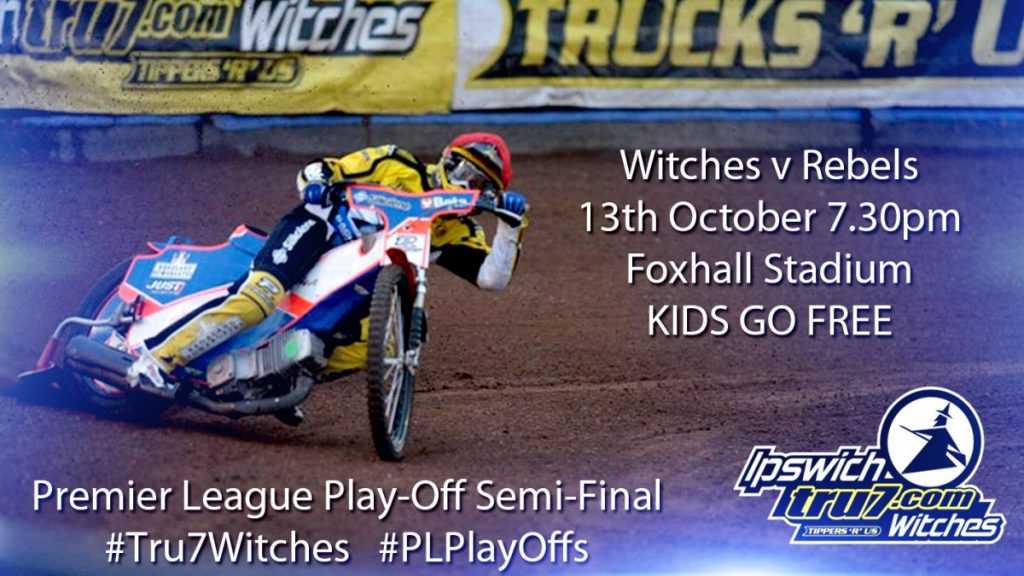 The ‘Tru7.com’ Witches host the Somerset Rebels on Thursday at Foxhall in the second leg of the Play-Off semi-final (7.30pm).

The two sides met at the Oak Tree Arena on Friday in the first leg with the Rebels taking a 16-point win that makes them favourites to progress to the final. However, since July 7th the Witches have only failed to win by more than 16 points on one occasion out of eight meetings. The Witches will still be confident of reaching the final with the tie far from over.

The home side are still without Danyon Hume due to injury and Connor Coles once again deputises at number seven. The Witches will also revert back to the original riding order with Nico Covatti back at number three and Ben Barker back at five.

The Rebels also continue to have problems at reserve with Bradley Wilson-Dean and Zach Wajtknecht on the sidelines. Robert Branford deputises again at number six with James Shanes coming in at number seven as a guest.

The two sides met at Foxhall way back in April with the away side taking a 48-42 victory with the Witches out of sorts. It promises to be a enthralling night of action as the Witches will do everything they can to make the final.

Team Manager Ritchie Hawkins is confident his side can progress to the final and says it’s another chance for Coles to showcase his abilities.

“It’s a big ask but we have come a long way to get here and I can’t see why we cannot turn it around,” said Hawkins.

“He (Connor) put in a very good performance in his first meeting for us and he has got a few Premier League appearances under his belt now and if he wants to be a full time Premier League rider it’s a good chance for him to shine, not only for us but for other promoters too.”

The boss says it was always the plan to revert back to the original riding order for the second leg and hopes his side can upset the odds once again.

“It must have been a confidence booster for Somerset on Friday but we don’t need to worry about who we are racing against because we’ve been very good at Ipswich.  We are the underdogs but we have been for the last six months.

Hawkins is hoping for another bumper crowd to cheer on the home side to the final.

“It’s the biggest meeting of the season, it’s massive and we can do it. We need everyone behind us and to create a big atmosphere and that would play in our favour.”

Season ticket holders receive discounted entry to this meeting and KIDS GO FREE. Why not get involved in the ‘Rattle the Rebels’ campaign led by Kevin Long. Kevin is urging fans to bring something along to Foxhall to make some noise for the boys (no air horns), in particular football rattles. We hope to see as many people on the terraces as possible for this massive meeting for the town.