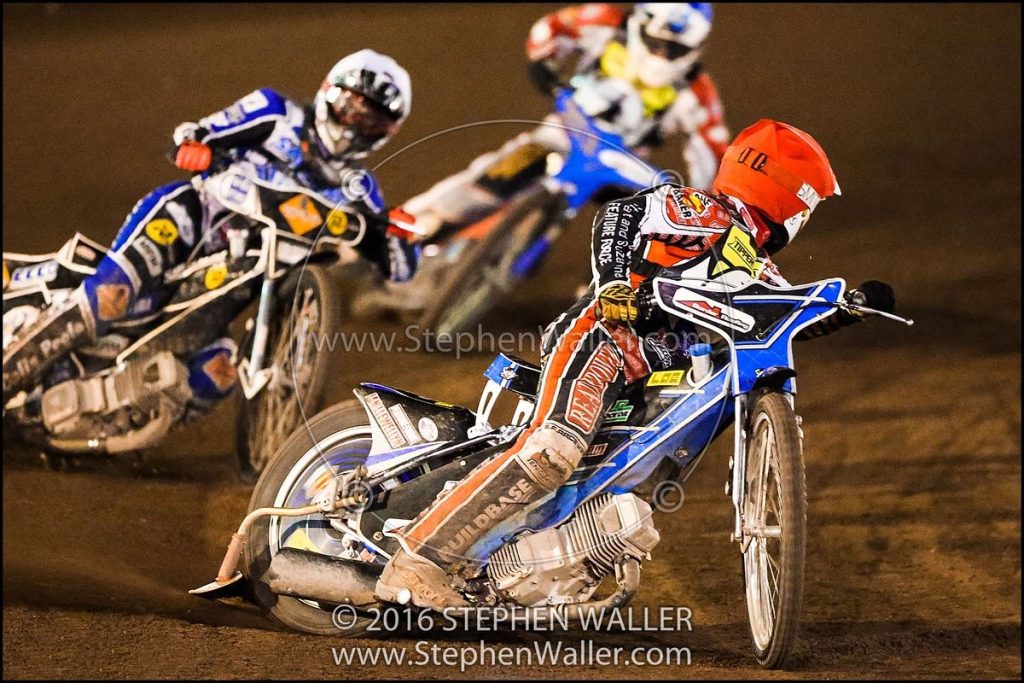 The ‘Tru7.com’ Witches were beaten 55-37 by the Newcastle Diamonds on Sunday in their final fixture of the Premier League campaign.

Already without the injured Danyon Hume, the Witches were dealt further blows as James Sarjeant was unable to ride due to injury and Joe Jacobs was absent with flu. It was no surprise to see the home side dominate proceedings despite a battling display by the Witches with attentions now turning to the play-offs for both sides. Morten Risager top scored with 13+1.

Steve Worrall beat King in heat one with Victor Palovaara third to get the home side off to a good start. Danny Phillips and Ashley Morris put the first 5-1 on the board in heat two for the home side. Morten Risager held the lead for the Witches in heat three but he was passed by Ludvig Lindgren on the third lap as the home side gained another heat advantage with Matej Kus in third. The Diamonds increased the lead further in heat four as Robert Lambert won comfortably ahead of Ben Barker with Phillips picking up a point for another 4-2 to give the home side a commanding 17-7 lead.

The early onslaught kept on coming as Kus won heat five ahead of King who had done well to pass Lindgren and limit the damage to just a 4-2. Heat six was stopped after Palovaara fell on the first turn and he was excluded from the re-run. There was further delay as the tapes failed to go up correctly but at the third attempt Barker got the first heat win of the night for the Witches with Shelby Rutherford picking up a point for a 4-2 to the Witches. Lambert was a winner again in heat seven for the Diamonds as Risager and Covatti ensured the points were shared. Ritchie Hawkins sent Risager out on a tactical ride in the following heat but the Dane could not catch Palovaara at the front despite having passed Phillips for second forcing the Witches to settle for a 4-4 leaving the visitors 30-20 down.

Barker claimed his second win of the night in heat nine as he beat home pair Lindgren and Kus to the chequered flag. Palovaara made the start in heat 10 but Covatti and Risager flew past the Diamonds man heading into the back straight to lead until Worrall produced a fantastic move to swoop round both Witches riders to take the win and prevent a heat advantage to the visitors. Rutherford was a faller in heat 11 and was excluded from the re-run that King won as the points were shared again. Kus won heat 12 ahead of Covatti as Phillips got third for a 4-2 to the home side to put them 43-31 up.

The home side sealed the win in heat 13 as Lambert and Worrall eased to a 5-1. Lindgren won heat 14 and it looked like being another 5-1 to the home side but Risager went up the inside of Morris on the third lap to limit the heat advantage to a 4-2. Lambert ended his night in style as he rounded Risager on the second lap in heat 15 to take the win in a shared heat that left the final score 55-37 to the home side.

Team Manager Ritchie Hawkins was pleased with the display under the difficult circumstances and highlighted the performances of Risager and Barker as positives to take away from the meeting.

“All things considered it was a decent performance,” said Hawkins. “We worked really hard to get the best guests we could in and the two guys we got in gave everything they could for the club and we have to thank them for their efforts.

“Morten was the highlight, he top scored and put in a really good performance and carried on his good form, he and Ben led the side today.”

Hawkins is hopeful that the absent duo of Sarjeant and Jacobs will have recovered in time to take their place in the side for Thursday’s Play-Off clash against Edinburgh.

“Joe should be over his illness by Thursday and Sarj (James Sarjeant) will be back by then too as he won’t want to miss that one. He had a big crash on Friday and was a bit beaten up by it but hopefully he will back for Edinburgh.”