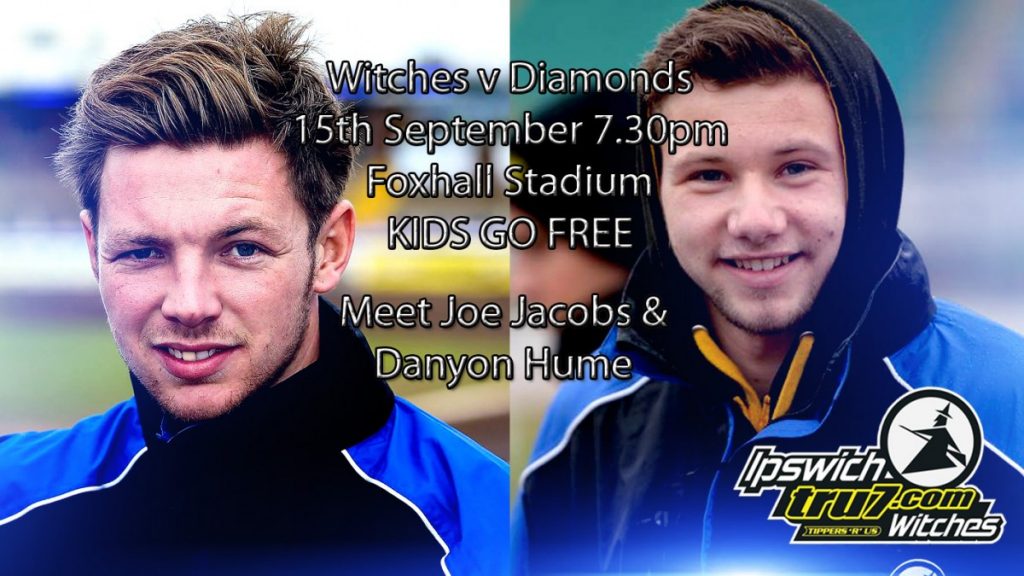 The ‘Tru7.com’ Witches face the Newcastle Diamonds on Thursday at Foxhall in their final home Premier League meeting (7.30pm).

There is huge importance on the meeting for the Witches, who know a win will confirm their place in the play-offs. A strong second half to the season has seen the Witches rise up the table and with Sheffield and Peterborough dropping points over the second half of the season it has given the Witches a golden oppurtunity on Thursday to extend their season and keep their title hopes alive.

Ritchie Hawkins’ side welcome back Nico Covatti into the team after he missed the away win at Redcar last time out. However, they will be without reserve Danyon Hume after he suffered a broken collarbone on Tuesday whilst riding for a British Young Lions U23 side at the Isle of Wight. Ipswich born Scott Campos will guest at number seven.

The visitors sit in third position in the table with a play-off place confirmed but they will be keen to finish as high as possible and build momentum ahead of the end of season drama. The away side will be without Robert Lambert due to an international commitment and a familiar face will step in for the young Brit as Lewis Kerr guests for the Diamonds. Britain’s number four Steve Worrall rides at five.

The last time the two sides met at Foxhall the Diamonds took a 49-43 win in last season’s Premier League.

Team Manager Ritchie Hawkins believes a win on Thursday could be enough to seal a play-off spot.

“The plan is to get the win on Thursday and carry on our good home form and then I would hope that will be enough to get us into the play-offs now,” said Hawkins. “I think if we win on Thursday we will finish fifth and face Edinburgh in the play-offs, that would be my prediction but you never know what is going to happen.”

Hawkins says the win at Redcar was the best of the season but knows it will be in vein if they fail to beat the Diamonds.

“We’re in brilliant form and we’ve hit a good run where it could turn out that we’ve found our form at the perfect time with another win on Thursday. The performance at Redcar was our best of the season in every aspect and it’s looking very good for us at the moment but we need to make sure we get the win on Thursday.”

The boss says Newcastle will be the toughest test the Witches have faced at Foxhall for some time but is not worried about the opposition.

“It will be our biggest test in a long while but we can’t spend too much time thinking about having a good run in the play-offs, we’ve got to get there first by winning on Thursday. It’s another pressure meeting but with the form we are in, we are not worried about Newcastle coming in good form either. It’s in our own hands now.”

The former skipper is hoping the Foxhall faithful continue to give the riders all their support during the meeting.

“We’ve been winning and the atmosphere has been a lot better at Ipswich, the crowd should increase hopefully and everyone wants to come and see a winning team. Our last meeting at home is now a massive meeting and hopefully the crowd will keep on coming and supporting us.”

Our KIDS GO FREE promotion continues for this meeting as we battle for a place in the play-offs. Prior to the meeting fans will have the chance to meet Joe Jacobs and Danyon Hume who will be up by the turnstiles inside the stadium with their bikes for fans to have photos with. Joe and Danyon will be signing autographs from 6.45pm until around 7.10pm.