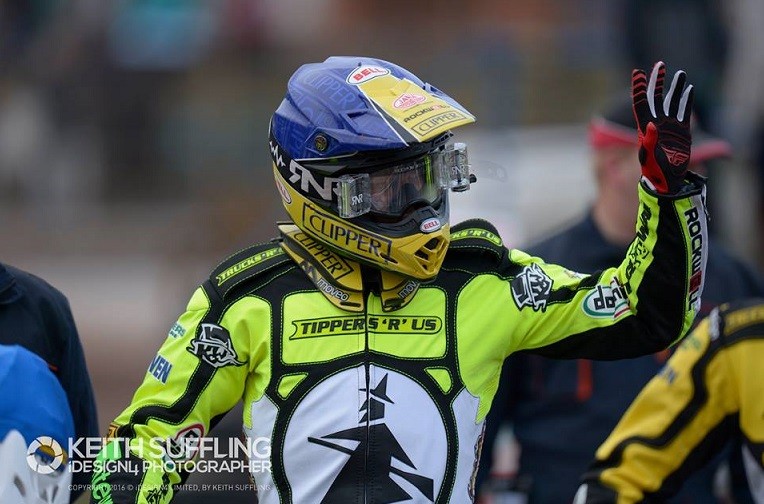 The ‘Tru7.com’ Witches suffered a last heat defeat at Peterborough Panthers in the League Cup on Sunday, going down 48-45 at the East of England Showground.

The Witches had a fantastic start to proceedings and stormed into a twelve point lead after five heats before a tactical ride came off for the home side and pulled them back into the meeting. It was nip and tuck from heat eight onwards before the Panthers took the win in heat 15 with the rain pouring down. Danny King top scored with 11+1 for the Witches.

The captain got the Witches off to the perfect start as he eased to victory with Lewis Kerr joining him for an opening heat 5-1 to the away side with new Panthers signing Craig Cook retiring at the back. Ollie Greenwood gated for the Witches in heat two but was passed by Simon Lambert on bend four of the first lap. Paco Castagna worked hard to pass Tom Stokes on the first bend of the final lap to take third and then the Italian took teammate Greenwood on the line for a shared heat. The Panthers gated on a 5-1 in heat three but Ulrich Ostergaard took a nasty fall on the home straight at the start of the second lap after clipping the fence which threw him off the bike and the Panthers captain was excluded. The Witches took full advantage of the re-run as Morten Risager gated and was joined by partner James Sarjeant who got past Emil Grondal on the third bend of the first lap for another 5-1 to the Witches. Nico Covatti led heat four for the Witches but Kenneth Hansen who was guesting for the home side took the Italian on the third bend of the second lap for the win in a shared heat that left the Witches 16-8 up.

The storming start continued for the Witches in heat five as Kerr and King coasted to another 5-1 leaving the Witches 21-9 up. The Panthers revival started in heat six as Cook won but it was only to be a 4-2 after Covatti passed Lambert on the second bend of the second lap. It was heat seven where the damage was done for the Witches though as Hansen eased to victory whilst on a tactical ride and was joined by Lambert for an 8-1 which essentially wiped out the Witches lead. The home side completed the turnaround after heat eight as Lambert and Hansen combined again for a maximum for the Panthers that left them 26-25 up.

However, the Witches did not let their heads drop and regained the lead in heat nine as Covatti’s first bend swoop set him off for victory with Castagna using the inside line to good effect to take third coming out of the fourth bend entering the second lap. Heat 10 looked to be heading for a 3-3 as Sarjeant held off the Panthers pair of Cook and Lambert for three laps but Cook then swooped round the outside of turns three and four on the third lap to take the lead and give the Panthers a heat advantage that put them back in the lead. The lead continued to change hands though as King remained unbeaten winning heat 11 with Kerr passing Stokes to take third on the exit of turn four going into the second lap. Risager won heat 12 in a shared heat that left the Witches 38-37 up with three heats to go.

King’s fantastic form showed no sign of stopping in heat 13 as he rounded Cook on the second bend of the second lap to take the win but it wasn’t to be a Witches heat advantage as Covatti lost the battle for third with Hansen after the pair had traded places several times throughout the four laps. As the rain started to fall Lambert won heat 14 to round off an impressive day’s work for the reserve but Sarjeant and Greenwood packed in the minor placings to prevent a Panthers heat advantage, taking it to a last heat decider with the score 44-43 to the Witches.

The rain was getting heavier and King’s chances of a maximum ended when he fell going into the second bend of the first turn after clipping the fence with apparent bike problems causing the fall. The captain was excluded from the re-run but most importantly walked back to the pits with no serious damage done. It was now chucking it down at the Showground, however the referee decided to go ahead with the last heat despite concerns from Team Manager Ritchie Hawkins and it was a non-event. The Panthers pair of Cook and Hansen eased to a 5-1 for the home side ahead of Covatti which ensured they would win the meeting with all three riders just making sure they got round the track without injury. That left the final score Peterborough 48-45 Witches, meaning the Witches took a point away from the meeting but with both teams already knowing their fate, the result made no difference to the League Cup table.

Team Manager Ritchie Hawkins was proud of his side’s performance despite the narrow defeat.

“I’m really proud of the boys tonight,” said Hawkins.  “I was really happy that they got such a good lead that they (Peterborough) had to switch everything about and use the black and white and they had to do everything just to try and get anywhere against us. That’s the first time this year that a team has had to do that and on their own track too. I’m really proud of the boys and I’m a proud Team Manager and there’s not many times this season I’ve been able to say that.”

Hawkins was impressed with his team’s pride and determination with the focus firmly on next Monday’s Premier League encounter against the Panthers.

“I just told them before the meeting that they’ve got to go out there and ride and show us the pride to ride for Ipswich but also our focus was on getting set for next Monday. If there was anything anyone needed to try we were allowing them do that to get set-up. Our focus is Monday in the league but that’s the first time all season we’ve had all seven riders with such pride and determination and that’s what we require to ride for Ipswich.”

After an inconsistent start for some of the Witches riders the boss sees signs that some are finding some consistent form now.

“Coventry raced Lakeside home and away on Friday and Saturday and I went to both meetings so I have seen a lot of the boys over the last few days and seen their performances. I think Danny has turned a corner now and is back to his old self and Lewi did really well tonight on what was a big day for him. We’re sticking with the boys and they need to carry on like they did tonight and ride like this  all season, it can’t be a one off.”

Hawkins has no concerns that King’s heat 15 fall will keep him out of action at all.

“I think Danny is alright, he’s been carrying a shoulder injury the last couple of weeks from a knock he had and every time he crashes it aggravates it but he’s got a few days off now so I’m sure he will get fit.”

Next Meeting: PL 30th May vs Peterborough (away)