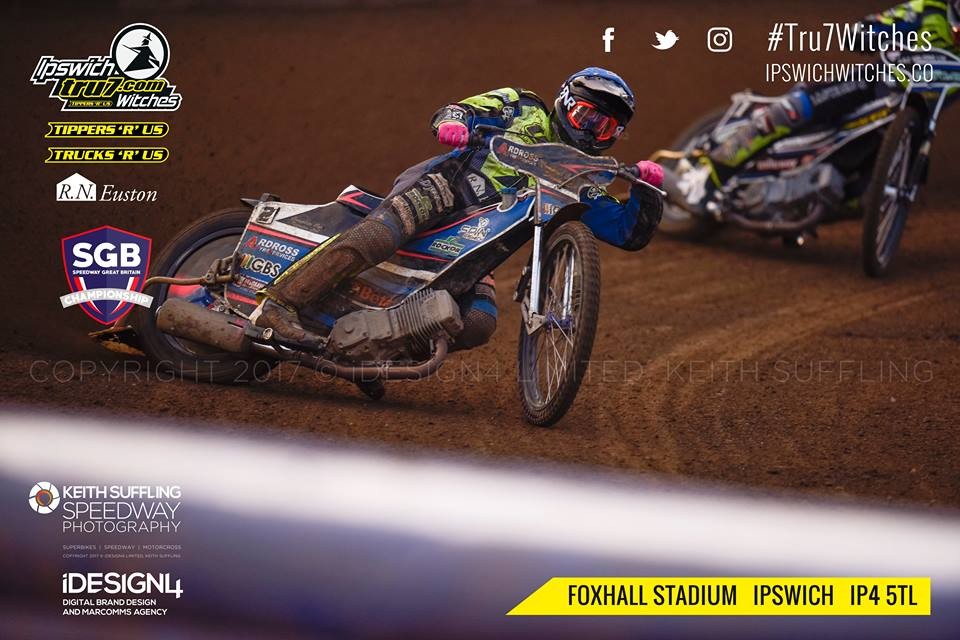 The ‘Tru7.com’ Witches are back on home shale on Thursday as they welcome Newcastle Diamonds to Foxhall in the Championship (7.30pm).

The Witches have been on the road twice since the last home victory over Scunthorpe, picking up a win at Scunthorpe before a disappointing defeat at Workington last Saturday. The Suffolk side currently occupy a play-off place sitting third in the table.

After a torrid time with injuries at the start of the season the Witches are now enjoying a run with all seven members of the side fit and available as the season enters the summer months.

Like the Witches, the Diamonds suffered play-off disappointment in 2016 but have kept faith with the majority of riders for 2017 and have started the season in solid fashion sitting seventh but having raced less than the top four teams. Great Britain star Robert Lambert spearheads the side and is supported by Steve Worrall at five. Former Witch Ashley Morris returns with Connor Coles at reserve after some important guest appearances for the Witches in 2016.

Foxhall has been a favourable track for the Diamonds in recent years with two wins and a draw from their last five visits although the last time the two sides met the Witches came out on top to seal a spot in the play-offs last season.

Team Manager Ritchie Hawkins is hoping his side can get back to winning ways at Foxhall after a break against a side that go well at Foxhall.

“Hopefully we can drop back into our home form that we were showing before the break,” said Hawkins. “It will be a tough meeting because Newcastle always go well at our place and I don’t see that being any different. We will need to be on our game again like we have been all season at Foxhall.”

The boss says the side need to put Saturday’s defeat at Workington behind them but admits they need to start picking up more points away from home as the chasing pack shuffle their cards to make a charge on the top four.

“We can’t dwell on it and we need to put it behind us quickly. I have heard from a few of the lads who were disappointed with their own personal performance. That is enough for me and you have to accept that and move on. We can’t be thinking of it come Thursday.

“I still don’t think anyone is stronger than us but we are concentrating on ourselves and carrying on that good home form. We need to start picking up some more points away from home because we have had a lot of meetings where we are not even picking up a point and we need to do that more regularly.”

Hawkins says they need to deny the visitors from taking anything away from Foxhall with the Diamonds expected to be challenging come the end of the season.

“They have started the season well so we need to make sure we don’t give them any points as I’m sure they will be up there fighting for the play-offs come the end of the year.”