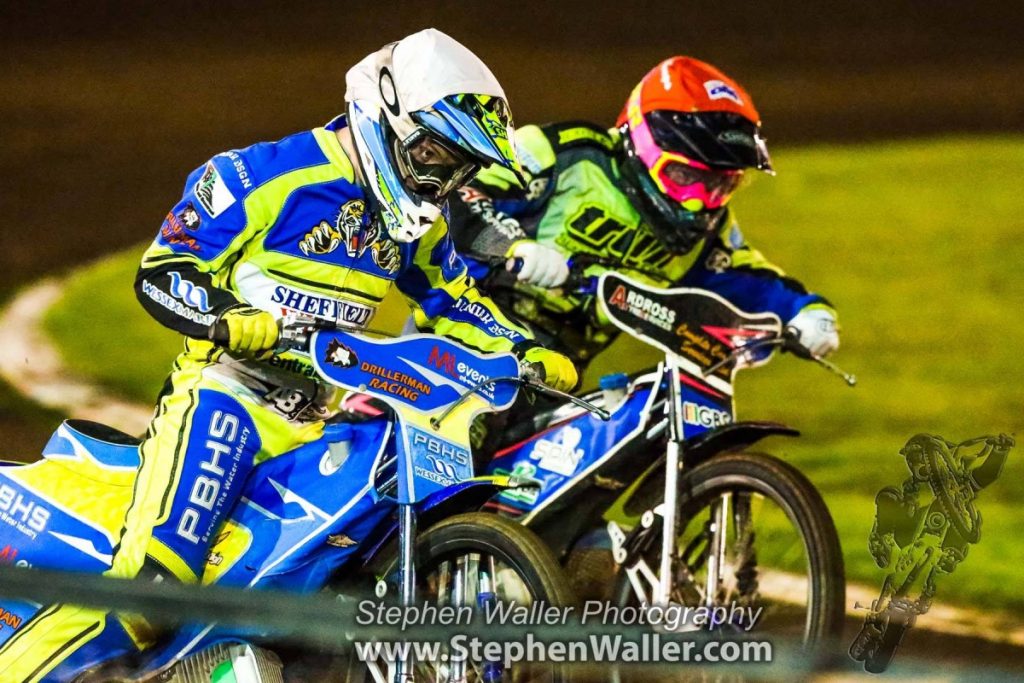 The ‘Tru7.com’ Witches were defeated 46-44 at Foxhall as Sheffield Tigers claimed the Championship trophy on Saturday night.

The home side had a 16-point deficit to overturn heading into the meeting after the first leg defeat at Owlerton on Thursday but started brightly enough in the second leg in front of a huge crowd at Foxhall. A Witches 5-1 in heat five put them just ten behind on aggregate and that looked like being cut to eight until disaster struck in heat eight. The Witches looked set for a 4-2 but Kyle Newman fell whilst leading with a 4-2 awarded to the away side to take their aggregate lead back to 12. The Suffolk side continued to battle but their opponents were too strong and took victory on the night to claim a deserved league title. Cameron Heeps top scored for the Witches with 13+1.

There was drama from the off in heat one as Sheffield guest Scott Nicholls and Nathan Greaves headed into the third turn of the first lap side by side with the Witches man suffering a nasty fall. Greaves was excluded much to the displeasure of the home crowd who made their feelings known. Todd Kurtz made the gate in the re-run but Danny King blasted round him on the fourth turn of the first lap to take the win in a shared heat. Jan Graversen won heat two as the points were shared again. Lasse Bjerre was then warned in heat three for jumping the start. Heeps rode fantastically to beat Bjerre in the re-run as Newman passed Josh Bates for third to give the home side a 4-2 and hope of starting the comeback. Kyle Howarth won heat four but the points were shared leaving the Witches 13-11 up on the night and fourteen down on aggregate.

The Witches fans were on their feet in heat five as Newman and Heeps delivered the first 5-1 of the night to the Witches as hope began to build on the terraces. Howarth won heat six from the gate in a shared heat before Rory Schlein did the same in heat seven. Heat eight was another dramatic heat. Newman led throughout but got into trouble on the first and second turn of the last lap with Graversen and Greaves unable to avoid clattering into him with all riders hitting the deck in a painful incident. All three were able to get back up with the Tigers awarded a 4-2 that made the score 26-22 to the Witches on the night, 12 down on aggregate.

Heat nine was one to remember for Witches fans and another that gave the stadium a glimmer of hope of a comeback. Howarth looked like being a comfortable winner as Heeps passed teammate Newman for second but the Australian set his sights on the leader and passed him on the final lap in wonderful style to take the win for a Witches 4-2. However, the Witches could not build on it and the visitors hit back in heat 10 with a 4-2 thanks to Bates beating King and Bjerre in third. Nicholls won heat 11 ahead of Schlein with Kurtz third as Greaves fell at the back, meaning the Tigers had almost won the title. It was all but over after heat 12. Heeps was a clear winner but Graversen worked hard and got Greaves on the line to take third for a shared heat that made it 37-35 on the night and 88-74 on aggregate with three to race.

King was warned in heat 13 for jumping the start as both Tigers made the gate in the re-run. It was looking like a 5-1 to the away side thanks to Nicholls and Howarth but the Witches captain never gave up and passed Howarth on the final lap to take second but the 4-2 to the Tigers sparked jubilant celebrations on the back straight as they celebrated with their fans. Bates won heat 14 in a shared heat as the scores were level on the night going into the final heat. Nicholls won again in heat 15 ahead of Heeps as Bates picked up third to give the Tigers a 46-44 win on the night before they lifted the trophy with their fans on the centre green.

Next Meeting: KOC SF 12th Oct vs Sheffield (away)