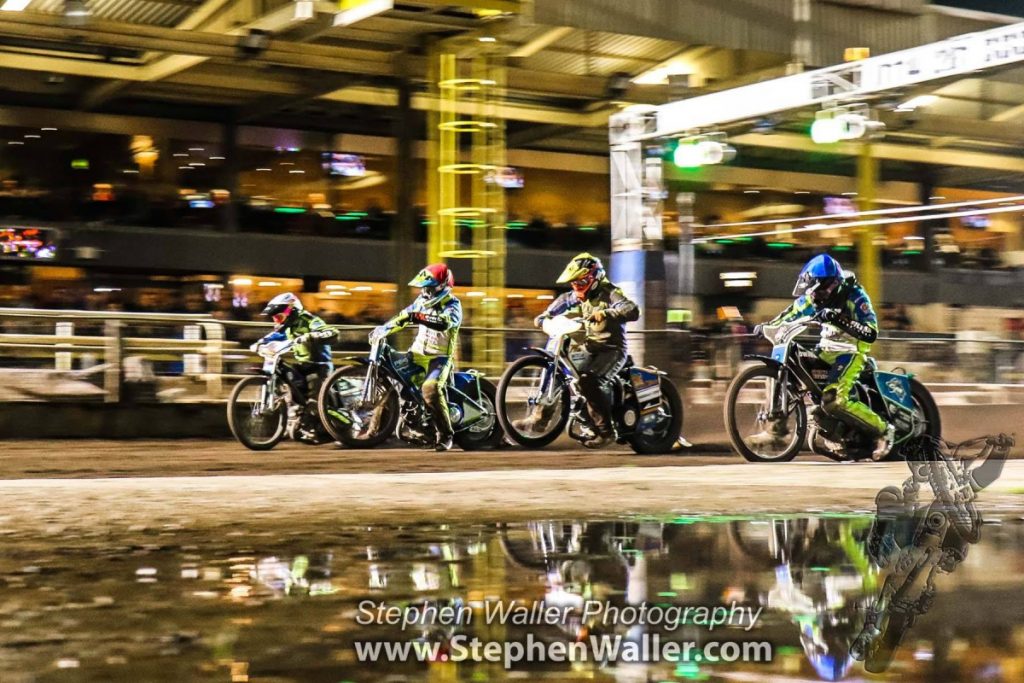 The ‘Tru7.com’ Witches suffered a 53-37 defeat to Sheffield in the first leg of the Championship Play-Off final at Owlerton on Thursday.

It was a tough, tight night of action as the home side showed why they finished top of the table but the Witches fought hard all night to keep the tie alive going into the deciding leg at Foxhall on Saturday night.

The Tigers started like a house on fire and it looked like being a long night for the Witches fans who had travelled but their side showed their fighting spirit once again to claw some points back and stay in the tie. The Suffolk side got within eight points of the hosts with three heats to go but a strong finish to the meeting saw Sheffield build up a 16-point lead to take to Foxhall. Danny King top scored with 9+1 for the Witches.

Josh Grajczonek won heat one from the gate as Nathan Greaves and King followed him home for a shared heat to open the meeting. George Wood and Jan Graversen put the Tigers ahead in heat two with a comfortable 5-1. The home side doubled their lead in heat three as Josh Bates hit the front ahead of Cameron Heeps and Lasse Bjerre nipped up the inside of the Australian going into the first turn of the second lap to join his partner for another maximum. The Witches got off the mark in heat four as Rory Schlein took the win with Kyle Howarth rounding Tom Bacon for second as the Witches guest kept him honest for the remainder of the race. That Witches 4-2 left the Tigers 15-9 up.

Bates and Bjerre were at it again in heat five as they hit a 5-1 with King unable to trouble them in third. Schlein was on fire in the early stages of the meeting and won again in heat six as Todd Kurtz came under Greaves for second going into the third turn of the first lap with Grajczonek retiring at the back meaning a 4-2 to the visitors. Medics saw to the Sheffield number one who had aggravated an injury picked up at Glasgow on Tuesday and he was withdrawn from the meeting. The hosts were able to use injury rider replacement for the rest of the meeting, to the surprise of the Witches camp. Heeps rode a stormer to hold off Howarth in heat seven as Kyle Newman worked overtime to get into third but was re-passed by Graversen meaning a shared heat. Greaves made the gate in heat eight but was passed by Kurtz going into the third turn of the first lap and was joined by Graversen going into the second lap for a 5-1 to extend the lead to 12 points at 30-18 to the Tigers.

Bates produced a stunning ride to win heat nine. He originally made the gate but was passed by Schlein coming out of the fourth turn of the first lap. However, the home rider wound it on and scraped the boards to fly round the Witches rider heading into the third lap and took the win with Bjerre third for a 4-2 that extended the lead to 14. Newman won heat 10 but Heeps was at the back meaning a 3-3. King got his first win of the evening in heat 11 ahead of Howarth with Greaves third for a much needed heat advantage to the Witches. It got better for the away side after a thrilling heat 12. Greaves made the gate as Heeps and Bjerre traded moves for second. Heeps went under the Dane heading into the second lap for second but the home rider cut back to re-pass the Australian going into the third turn. Heeps read the move and repaid the compliment coming out of the fourth turn to give the away side a huge 5-1 and make it 40-32 to the home side with three to race.

Howarth won heat 13 ahead of King with Bates third for a 4-2 that gave the Tigers a ten point lead. Heat 14 was a cracking heat but it was no consolation for the Witches as the hosts claimed a 5-1. Bates was up to his old tricks again, swooping round Greaves on the fourth turn of the first lap to lead and his partner Graversen then passed Greaves coming out of the fourth turn of the second lap. Meanwhile, Newman was giving it everything at the back, going wider and wider, throwing everything at the home pair but they hung on for a maximum heat advantage. Howarth won the final heat ahead of King as Bjerre picked up a point to give them a 53-37 lead to take to Suffolk on Saturday.

The second leg of the final is at Foxhall Stadium this Saturday, 7.30pm. Kids go free to this meeting.