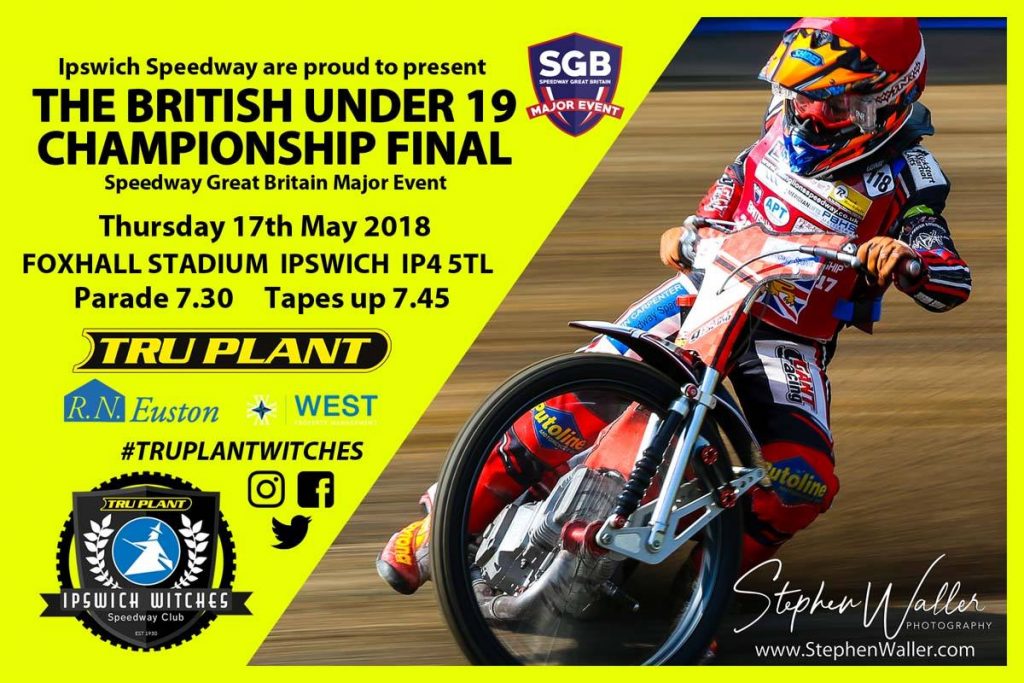 Foxhall Stadium hosts the British Under-19 Championship on Thursday as Britain’s next generation of riders battle it out for the prestigious title (7.30pm).

16 of the finest young riders in the country will race it out over 20 heats with the winner crowned the new champion. It is the first major event to be held in Suffolk since the Elite League Pairs Championship back in 2010 when Coventry came out on top and the Ipswich promotion are delighted to host the event and are hoping a big crowd will add to the occasion. Zach Wajtknecht was crowned in 2017 after a 15-point maximum at Plymouth ahead of Dan Bewley and Kyle Bickley. Wajtknecht is now ineligible to race in the event and Dan Bewley starts as the favourite to take the title this year after his blistering start to the season with Belle Vue in the Premiership and Workington in the Championship. There will be plenty of local interest as Drew Kemp, Taylor Hampshire, Charlie Brooks and William O’Keefe take to the Suffolk shale.

Dan Bewley is the name on many speedway fans’ lips at the moment and with great reason. The Cumbrian already seems to have a catalogue of high profile heat wins at Premiership level with Belle Vue as his sweeping style entertains the home crowd at the National Speedway Stadium. Bewley has already produced stunning rides to beat Krzysztof Kasprzak and Sam Masters in the top flight this season and will take some beating on Thursday.

Drew Kemp is a man many Witches fans will be keen to see in competitive action having watched the youngster take several practice laps around Foxhall over the past few years. It’s Kemp’s first full season in the sport but he has started in fine fashion scoring a 15-point maximum at the Isle of Wight and a 17+1 paid maximum at Plymouth. With his home track knowledge Kemp could surprise a few on Thursday.

Zach Wajtknecht was crowned British Under-19 Champion with a flawless 15-point maximum at Plymouth last year. The Swindon and Lakeside star had missed the 2016 event due to injury but underlined his pedigree with an unbeaten performance at the St Boniface Arena. The remaining rostrum places were decided by a run-off after three riders finished level on 13 points. Second spot overall was taken by Dan Bewley with Kyle Bickley in third, just ahead of Birmingham captain Jack Parkinson-Blackburn.