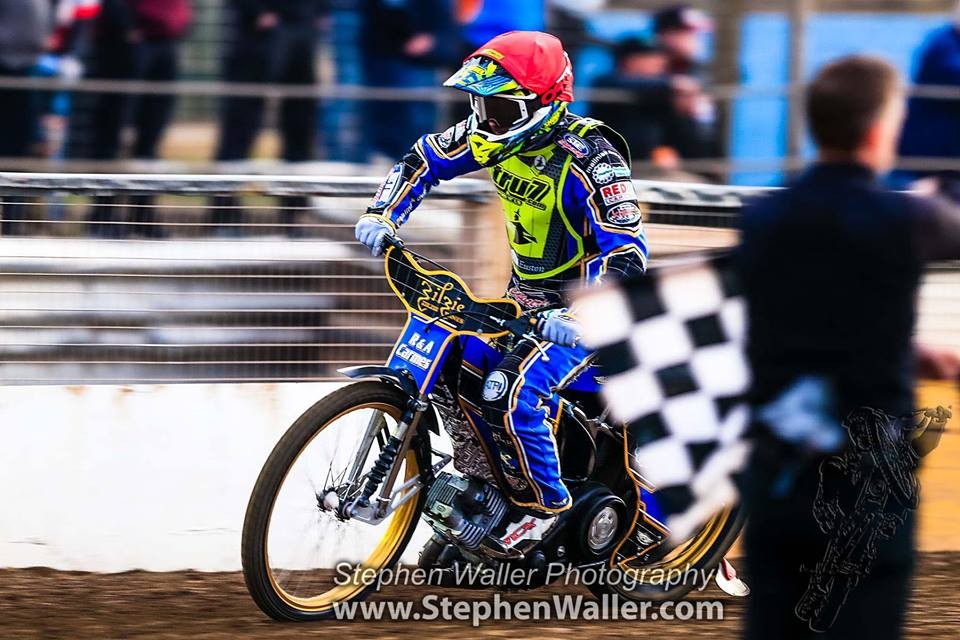 The ‘Tru7.com’ Witches suffered a gut-wrenching end to their meeting at Edinburgh, coming away pointless after a 48-40 defeat in the Championship.

The away side had started brightly and led early on and with Mark Riss withdrawn from the meeting after heat six the Witches looked in a strong position. The Witches were leading with three heats to go and looked set to take at least a point back to Suffolk but a heat 13 5-1 and a heat 14 5-0 to the home side ensured victory for Edinburgh, leaving the Witches kicking themselves. Justin Sedgmen top scored with 9+1.

The meeting started with a 3-3 as Sam Masters won heat one ahead of Danny King and Kyle Newman. The home side suffered some bad luck in heat two as Mitchell Davey packed up at the tapes but partner Josh Pickering won the heat as the points were shared again. It was the Witches’ turn to suffer some bad luck in heat three as early leader Sedgmen suffered an engine failure whilst in second on the second lap, leaving Erik Riss to take the win ahead of Cameron Heeps with Max Clegg in third for a Monarchs 4-2. The visitors responded in excellent fashion in heat four as Rory Schlein and Nathan Greaves hit a 5-1 as Ricky Wells suffered an engine failure at the tapes, leaving the Witches 13-11 up.

Erik Riss was a winner again in heat five but King and Newman were both in the points again for a 3-3. Heat six was stopped after a nasty incident involving the home pair of Masters and Mark Riss. Schlein was the early leader with Masters on his tail but the Monarchs skipper got out of shape on the fourth bend of the opening lap and his partner Mark Riss was unable to avoid him and went crashing into the fence. Masters was excluded from the re-run as Mark Riss was seen to by the medics and was then withdrawn from the meeting and taken to hospital.

After a major delay to the meeting the action got back underway as Pickering replaced the injured Mark Riss in the re-run. Schlein made the gate again with partner Connor Mountain in second but Pickering passed the Witches reserve on the final lap to limit the damage to a Witches 4-2. Sedgmen won heat seven but similarly to the previous heat, Heeps couldn’t hold onto second as Wells passed him on the back straight of the third lap but it was another 4-2 to the Witches to extend the lead. Heat eight was called back after a problem with the tapes. The re-run was also stopped after Newman fell on the third bend of the second lap forcing Pickering to take evasive action. The Witches man was excluded from the third running of the heat. There was another fall in the next running of the heat as Greaves fell early on and cleared the track leaving the home side to pick up a 5-0 and narrow the score to 24-23 to the Witches.

Greaves replaced Mountain in heat nine and Erik Riss won his third heat of the night as Schlein fell on the second lap whilst third but Greaves managed to hold off Max Clegg for second but a 4-2 gave the home side the lead. The Witches pair made the gate in heat 10 but Masters had other ideas, first passing Heeps for second and then passing Sedgmen on the second lap as the points were shared. Wells won heat 11 but King and Newman were again in the points for a 3-3. Sedgmen was the first man to beat Erik Riss in heat 12 as Mountain picked up a valuable third for a 4-2 to edge the Witches back in front, 36-35 with three heats to go.

Heat 13 was stopped after King fell on the third bend of the first lap after being edged out by Wells and was excluded from the re-run. Wells won the re-run as Masters passed Schlein to take second and record a 5-1 at a vital time in the meeting to give the home side the lead. Heeps led in heat 14 ahead of the home pair but fell as did Greaves in a separate incident leaving the Monarchs to coast to a 5-0 in the re-run. Wells won the final heat as Masters suffered an engine failure on the opening lap but a 3-3 gave the Monarchs a 48-40 win, leaving the Witches pointless after such a promising position.