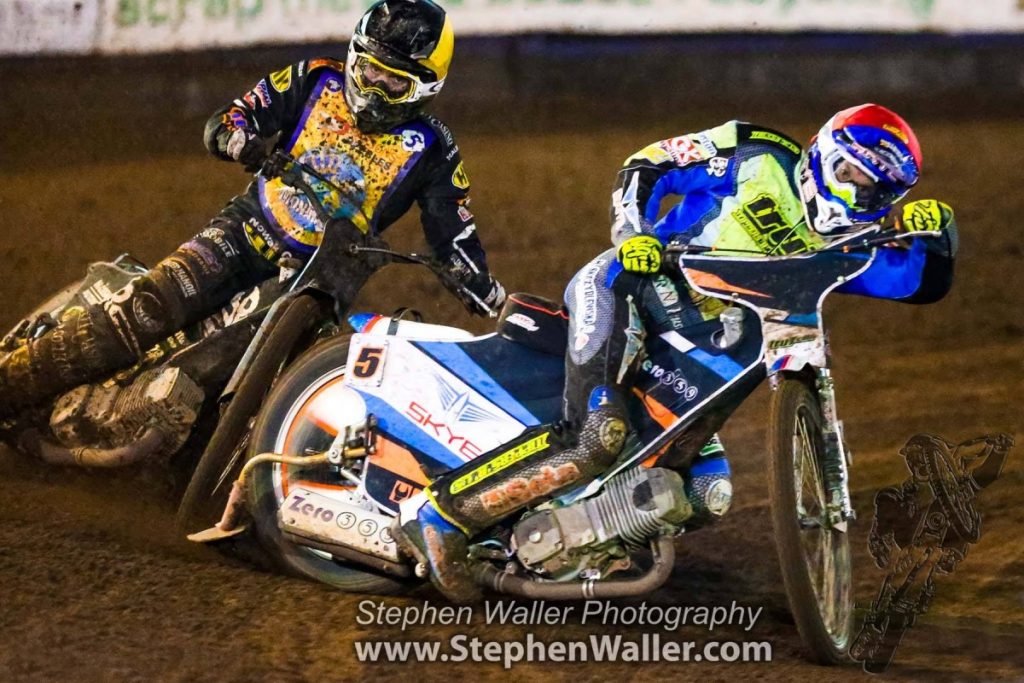 The ‘Tru7.com’ Witches progressed to the Championship Play-Off final after a nervous last heat decider saw them go down 48-41 on the night in Edinburgh but progress 91-88 on aggregate.

Nerves were in the air on such a big occasion and the teams traded 5-1’s to start the meeting before things settled down a little. The hosts held a four point lead going into heat eight before both of their riders were excluded leaving the Witches to pick up a 5-0 to put them ahead in the meeting. Ipswich looked to be heading towards the final but it was thrown into doubt as the home side came on strongly as a couple of 4-2’s and a 5-1 in heat 13 put them seven ahead on the night and just three behind on aggregate. It all boiled down to a last heat decider but it was Rory Schlein who kept his nerve to win heat 15 and confirm the Witches’ spot in the final. Schlein top scored with 13.

Things couldn’t have started any worse for the Witches in heat one. Danny King was warned for moving at the start and in the re-run the home side recorded a 5-1 with King suffering mechanical issues whilst chasing to get into second. Nerves were evident and Max Clegg went through the tapes in heat two and went from 15 metres in the re-run. The away side responded in the best possible way as Connor Mountain and Nathan Greaves settled the away side’s nerves with a 5-1 to draw level. The 5-1’s continued but it was the home side who went back in front in heat three thanks to Sam Masters and Mark Riss. Erik Riss won heat 4 ahead of Schlein as Mountain got into third to make it and 3-3 and leave the home side 14-10 up.

Masters won again in heat five as Mark Riss claimed third for a 4-2 to put them six up on the night as they closed in on aggregate. Schlein won heat six and Greaves snatched third after Josh Pickering went too wide, resulting in a 4-2 to the Witches. Erik Riss won a first lap battle with Kyle Newman to win heat seven but with Newman and Mason Campton both in the points, it was a shared heat.  The Witches made the gate in heat eight but Pickering fell on the third bend of the first lap and was excluded. There was more drama in the re-run as Clegg went into the back of Schlein and was also excluded, leaving Schlein and Greaves to pick up a 5-0 to put them 24-23 ahead on the night.

Schlein was warned for jumping the start in heat nine as Mark Riss won the re-run ahead of Schlein and Mountain meaning a shared heat to keep the away side ahead. The Witches looked like extending the lead in heat 10 as Newman and Campton hit the front but the guest fell on the third bend of the opening lap, meaning the visitors had to settle for a shared heat. The home side went back in front on the night as Erik Riss beat King to the chequered flag with Clegg picking up third for a 4-2. The home side edged ever closer on aggregate as Masters won again ahead of Campton. Greaves worked his way into third past Clegg but the home rider fought back and re-passed the Witches man to give the Monarchs a heat advantage and put them 37-34 up, and seven behind on aggregate.

Heat 13 proved to be yet another dramatic heat as King jumped the start and was excluded after his earlier warning. Mountain came in for the re-run but that was stopped after Wells took Schlein wide causing the Australian to fall but Rooboy was excluded as tensions got higher. Edinburgh recorded a 5-1 at the third attempt to go seven up and just three behind on aggregate. Newman got a crucial heat 14 win as Greaves fell at the back, taking it to a last heat decider with the home side needing a 5-1 to progress. Masters made the gate in heat 15 with partner Erik Riss in third behind Schlein but the Witches number five forced his way to the front at the end of the first lap to seal his side’s spot in the Play-Off final.