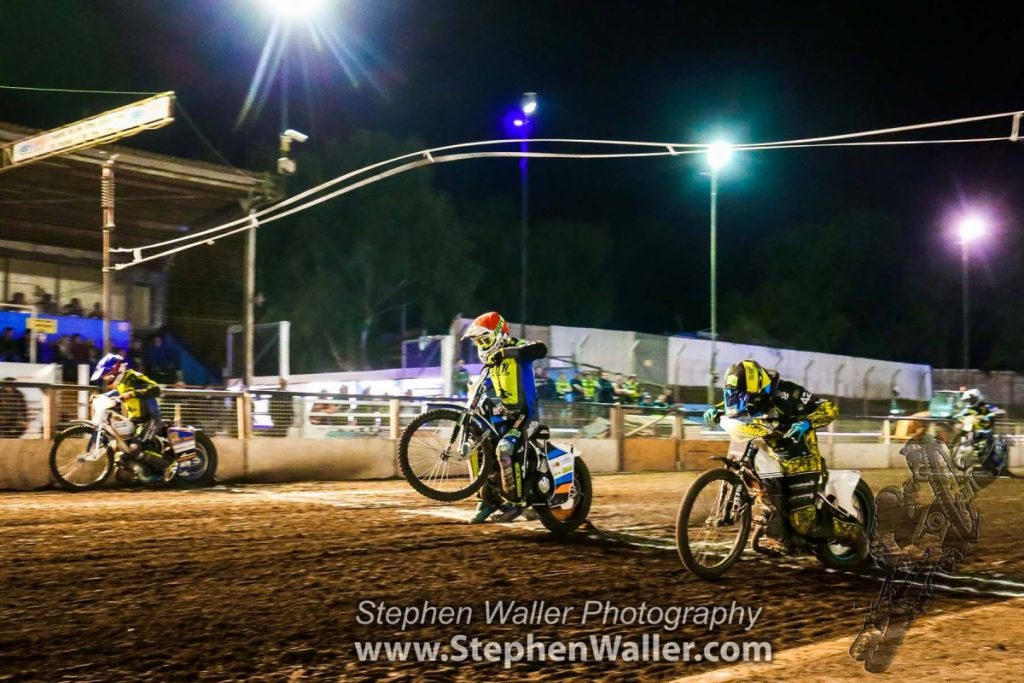 The ‘Tru7.com’ Witches produced a fighting performance to gain an away league point at Edinburgh on Friday after a 48-44 defeat in the Championship.

The home side started the stronger and produced the first five heat winners of the night as they built up a lead of six points by heat six. Rory Schlein got the Witches off the mark with a heat win but the home side kept chipping away with a string of 4-2’s as the meeting looked to be getting away from the Witches with guest Thomas Jorgensen withdrawing and leaving the visitors with just five riders. Danny King’s tactical ride win in heat 11 gave the away side hope and the Suffolk side came on strongly at the end to ensure they went home with a point. Schlein top scored with 13.

Sam Masters was fastest in heat one shaking off King behind him to win as Josh Pickering picked up third for a 4-2 to the home side to start proceedings. Max Clegg won heat two ahead of Nathan Greaves with Connor Mountain getting himself into third on the second lap to secure a 3-3. Ricky Wells was the next Monarchs winner in heat three and Kyle Newman had to fend off a strong challenge from Mark Riss for second to limit the side to a 4-2 heat advantage. Erik Riss was the fourth Edinburgh rider to take three points as he beat Rory Schlein and Mountain as the points were shared, leaving the Monarchs 14-10 up.

The wait for a Witches heat win went on as Wells won again in heat five ahead of King and Mark Riss claimed third for a third 4-2 of the night. Masters fell after a tough first corner in heat six and was excluded from the re-run by the referee. Schlein provided the first heat win for the away side in the re-run, winning comfortably ahead of Pickering with Greaves third for a Witches 4-2 to narrow the gap to four points. Heat seven must have brought back flashbacks from the previous visit to Armadale as Mitchell Davey and Thomas Jorgensen both fell in the same spot on bends one and two with both excluded. Erik Riss won the re-run ahead of Newman for a 3-2. Pickering got a win in heat eight as Mountain split the home pair but another 4-2 to the home side gave them a 27-20 lead at the halfway stage.

The home side recorded another 4-2 in heat nine as Wells continued his perfect night beating Schlein with Mark Riss in third. Witches guest Jorgensen was withdrawn from the meeting after his earlier crash and the 4-2 trend went on as Pickering won heat ten with Newman preventing a 5-1 by passing Masters on the third lap to take second but the hosts extended the lead to 11 with the meeting seemingly slipping away from the Witches. However, King gave the away side hope again in heat 11 as he won his tactical ride to lower the colours of Erik Riss for the first time on the night and claw back three points with a 6-3. Wells completed his programmed rides with four wins from four after victory in heat 12 but Greaves and Mountain followed him home to keep the Witches in with a shout of point at 41-33 down with three heats to go.

Masters was withdrawn from heat 13 and replaced by Davey and Schlein came out and won ahead of Erik Riss with King third for a Witches 4-2 to narrow the gap to six points. The Suffolk side were coming on strong and Newman stamped his authority on heat 14 early on to lead and it looked like being a shared heat until Mark Riss fell on the final turn allowing Mountain to pick up a point to reduce the home side’s lead to just four points. Schlein ruined Wells’ maximum in the final heat as he beat the two Monarchs in a shared heat that earned the depleted Witches an away league point, with the final score 48-44 to the home side.

Next Meeting: C2 10th September vs Sheffield (away)