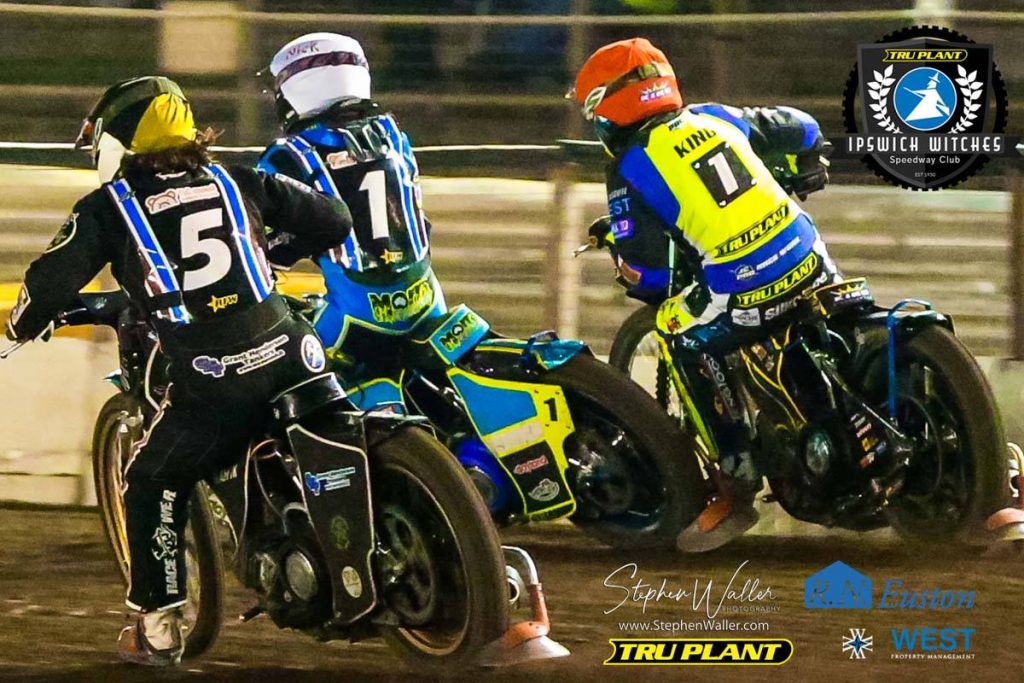 The ‘Tru Plant’ Witches suffered another disappointing night at Foxhall as they were defeated 44-45 by the Lakeside Hammers in the Championship Shield, ending any hopes of qualification from the group stage.

The home side went into the meeting knowing they needed a big win to keep their slim hopes of progressing alive but they were never ahead on the night as they battled all evening to keep with the Hammers. The Witches needed a 5-1 in the final heat to take the win but fell short, meaning the Essex side secured their qualification. Captain Danny King top scored with 15+1

King came out and won heat one with ease in a 3-3 to open proceedings. Connor Mountain was a faller on turn one of heat two leaving the Hammers duo of Zach Wajtknecht and Alfie Bowtell to keep Danyon Hume behind them and strike an early blow. Adam Ellis continued his good form and won heat three as Cameron Heeps and Rory Schlein filled the minor placings. Bowtell fell on the first turn of the second lap and was excluded from the re-run as teammate Richard Lawson led. Lawson came back out in the re-run to win, leaving the away side 14-10 up.

Schlein won by some margin in heat five as Heeps picked up third for a 4-2 to the home side. King was a winner again in heat six as Michael Härtel nipped up the inside of Wajtknecht coming out of the fourth turn of the opening lap for third, meaning the scores were level. Ellis made it two wins from two in heat seven ahead of Nico Covatti as Kyle Newman picked up a point to put the away side back in front. Härtel was an impressive winner in heat eight and with Ben Morley suffering bike problems on the first lap, Hume took third to level the scores up again at 24-24.

Lawson couldn’t be beaten in heat nine but the Aussie duo of Schlein and Heeps were both in the points for a shared heat. Newman and Ellis made the gate in heat 10 but captain King swooped round Ellis on the opening lap. However, he couldn’t find a way past Newman at the front who rode well to fend off the heavy pressure. Nick Morris won heat 11 as Covatti tried to avoid the back of Australian on the fourth turn of the opening lap as he looked to wind it on around the outside. Covatti fell leaving the away side to pick up a 5-1. That forced Ritchie Hawkins into making a tactical substitute in heat 12, bringing King into replace Hume. Ellis was warned for moving at the start but in the re-run Schlein and King were in a class of their own and recorded the first Witches 5-1 of the night, making it 35-37 to Lakeside.

There was a nasty fall for Covatti on the second bend of the opening lap of heat 13 and he was excluded from the re-run and went straight to the medical room for treatment on a rib injury. Morris and Lawson made the gate in the re-run and looked like recording another maximum but the Australian got out of shape on the second turn and fell on the third lap, meaning a 3-2 was awarded to the visitors. Newman rounded Hume on the fourth turn of the opening lap of heat 14 to lead and held the Witches duo off as Wajtknecht almost stole third on the line from Heeps after the Witches number four had gone wide into the final turn. That left the home side needing a maximum in the final heat and King and Schlein made the gate but Morris managed to split the pair, meaning they took the win on the night and three Championship Shield points.

RN Euston Rider of the Night

King led the way and was the sponsors’ choice for Rider of the Night after clocking up 15+1 in his usual entertaining fashion around the boards.

It all went down to the final heat with the Witches needing a 5-1 to take the win. King and Schlein looked like they were going to pull it off but visiting number one Morris did well to muscle his way through and keep Schlein behind him to seal their victory.

The ‘Tru Plant’ Witches are back in action on Tuesday 24th April when they travel to the East of England Arena & Events Centre to take on Peterborough.