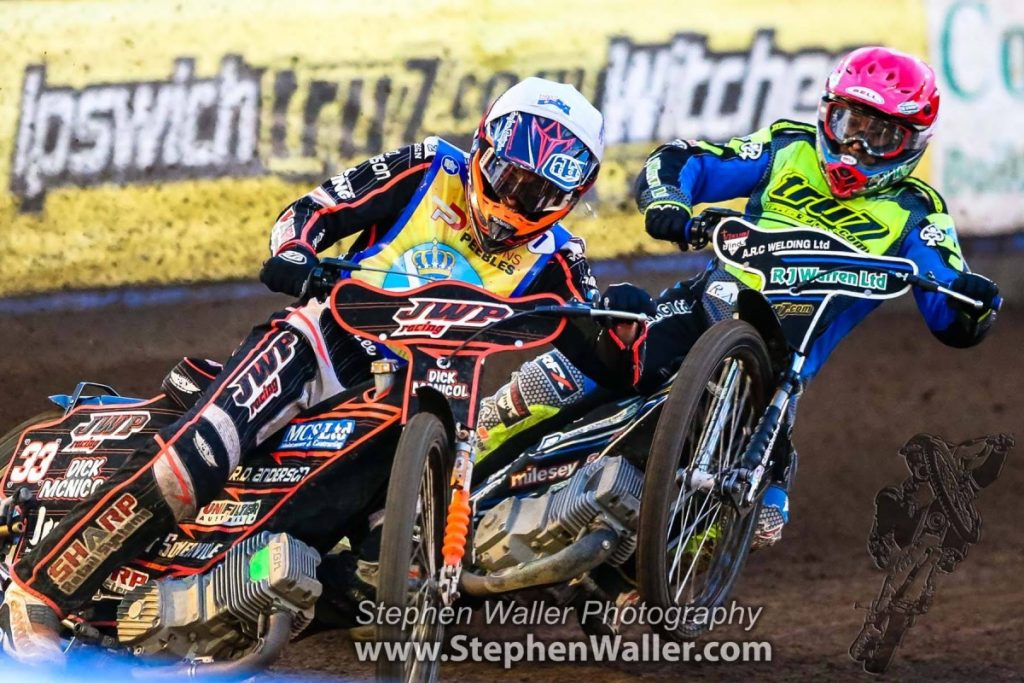 The ‘Tru7.com’ Witches fell to their first home defeat of the season as the Edinburgh Monarchs snatched a 47-46 win at Foxhall on Thursday in the Championship.

The home side looked to be cruising to another victory on home shale as they held a 12 point lead heading into the eleventh heat. However, Sam Masters won a tactical ride for the away side in heat 11 and it turned the momentum in the tie as the visitors gained confidence and claimed a heat advantage in heat 15 to pinch the win. Danny King top scored for the Witches with 11+1.

King won heat one ahead of Masters as Kyle Newman picked up third for a first heat advantage of the night for the home side. Connor Mountain was a faller on the first turn of heat two but got up to remount and allow partner Nathan Greaves to take the three points. Ricky Wells was made to work hard for his win in heat three as Cameron Heeps threw everything at the American but he managed to fend off the home rider as the points were shared. Erik Riss won heat four but Mountain won the battle for third to ensure a share of the points, leaving the Witches 13-11 up.

Masters suffered an engine failure early on in heat five as Justin Sedgmen and Heeps hit the first 5-1 of the night to extend the Witches’ lead. Riss got away with a flyer from the tapes in heat six and won comfortably in a shared heat. Rory Schlein won heat seven but Greaves couldn’t get into third despite trying all he knew to get past Max Clegg. Newman won heat eight as Josh Pickering split the home pair by passing Mountain for second, but a 4-2 left the home side 28-20 up.

Riss made it three wins from three in heat nine as the Witches filled the minor placings for a 3-3. King and Newman stormed to a 5-1 in heat 10 as home side went into a 12-point lead with five heats to go. That enabled the away side to use the dreaded tactical ride and despite having to jump on Theo Pijper’s bike ahead of the start of heat 11, Masters duly won to claim six points with Pickering in third for a 7-2 to suddenly give the away side hope of a result out of nowhere. Heeps won heat 12 in a shared heat to leave the Witches still in control and 41-34 in front.

King was adjudged to have jump the start in heat 13 as he was warned and all four were called back for the re-run. Masters won as Riss passed Schlein on the fourth turn of the second lap to take third and narrow the home side’s lead. Sedgmen made the gate in heat 14 and looked to be sealing victory for the Witches but he fell whilst leading on the second bend of the second lap, leaving the Monarchs to pick up a 5-1 and take it to a last heat decider. Masters made the gate in heat 15 and was chased hard by King in second as Riss fended off the strong challenge from Heeps for third meaning a 4-2 to the visitors that clinched them a 47-46 win.

Next Meeting: C2 30th July vs Glasgow (away)