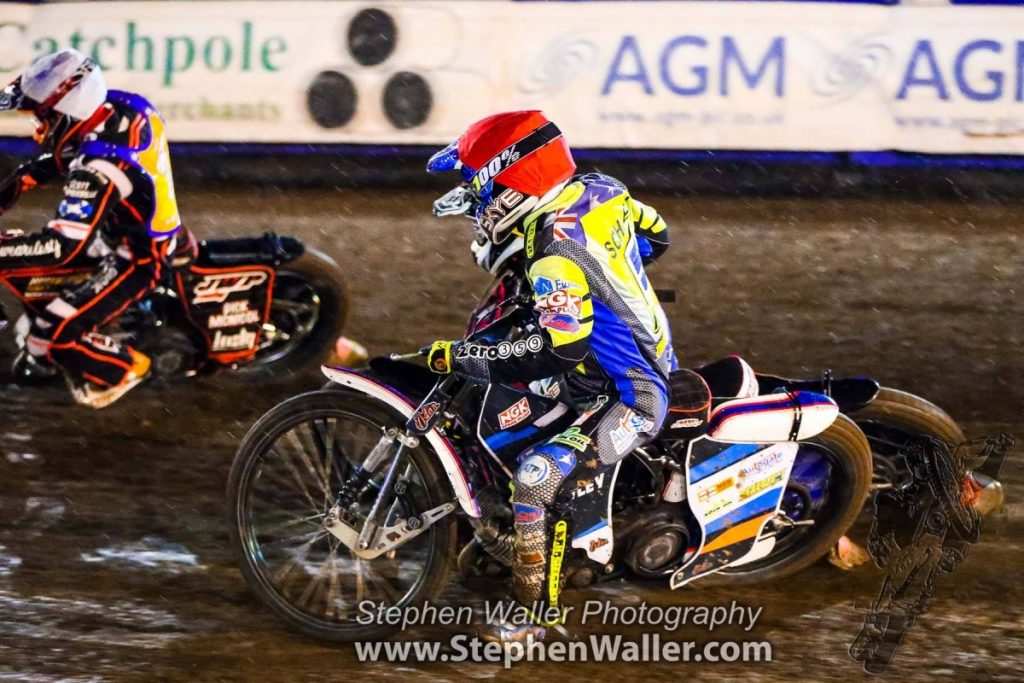 The ‘Tru7.com’ Witches travel to Edinburgh on Friday with a 10 point lead after a 50-40 victory over the Scottish side on Thursday at Foxhall in the Play-Off semi-final first leg.

The home side started the stronger of the two sides and built up and eight point lead by heat six. However, the forecasted rain arrived in a shared heat six before the away side recorded a 5-1 in heat seven as conditions deteriorated and the rain continued to come down.

A track inspection was called and thankfully the rain stopped as new shale was put on the track and the action got back underway. Five shared heats followed before Rory Schlein and Danny King recorded a vital 5-1 in heat 13 and a further 4-2 in heat 14 extended the lead to take to Edinburgh as the final heat ended in a 3-3. Schlein top scored on the night with 11+2.

King won heat one as the Witches put themselves ahead straight away with Kyle Newman picking up third. Nathan Greaves took victory in heat two as the Witches’ strong start continued with Connor Mountain claiming third for consecutive 4-2’s to start the evening. Sam Masters got the Monarchs’ first heat win of the meeting in heat three ahead of Mason Campton and Newman, meaning a shared heat. Schlein was first across the line in heat four but Mountain couldn’t get into the points leaving the Witches 14-10 up.

Newman and Campton hit the front early on in heat five and never looked back as they hit the first 5-1 of the meeting to double the home side’s lead. Erik Riss held off a strong charge from King to win heat six as the rain began to fall on the Suffolk shale. The rain got harder in heat seven and after the away pair of Masters and Josh Pickering made the gate, it was a case of getting round and collecting a vital 5-1 to the visitors as Schlein retired. A track inspection was taken following the heat as riders took a look at conditions and thankfully the rain eased off as new shale was put onto the track so the action could go on. The meeting got back underway and Campton and Greaves looked like recording a 5-1 in heat eight but Greaves got into trouble on the second bend of the second lap and fell meaning a shared heat which left the home side 26-22 up.

Then came a string of shared heats as both sides refused to back down. Newman won heat nine in the first of the block of 3-3’s and then Masters won heat 10 seeing off King for the win. Schlein won heat 11 and it looked like being a 4-2 to the home side with Greaves in third but Pickering produced a fantastic pass on the final turn to deny the Witches a heat advantage. Campton then put in a fine display of his own to dive down the inside of Masters going into the third turn of the first lap and was the only man to beat the Edinburgh captain on the night. That 3-3 left things finely poised with the Witches 38-34 up.

It was the duo of Schlein and King that produced the goods again in heat 13 as they got Foxhall on their feet with a crucial 5-1. The home pair made the gate but it looked like Riss was going to pass King before the skipper fought back to reclaim second and seal the maximum heat advantage. There was more drama in heat 14. Greaves made the gate and was ahead going into the first turn before Riss tangled with the home reserve and both went down. Riss was excluded from the re-run. Greaves picked himself up and won the re-run as Newman took third for a 4-2. Masters rounded off a good performance for himself by winning heat 15 holding off King as Schlein also worked overtime to keep Riss at the back to give the Witches a 10 point lead going into the second leg.

Next Meeting: Championship Play-Off 22nd Sep vs Edinburgh (away)