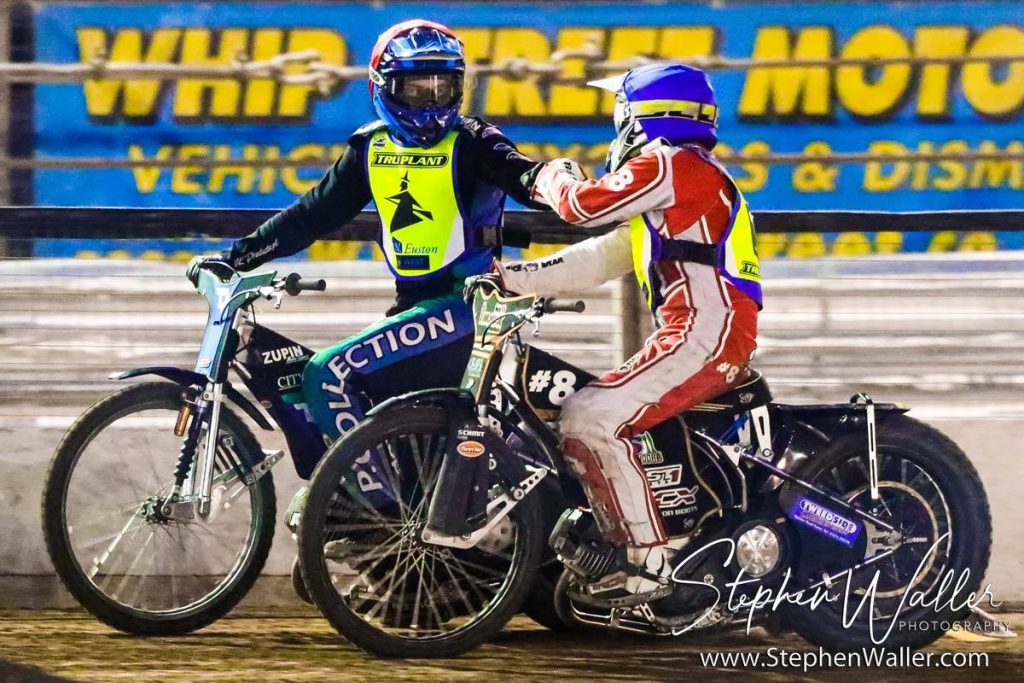 The ‘Tru Plant’ Witches continued their recent good form seeing off Lakeside 51-39 on Thursday at Foxhall in the Championship.

The Hammers had beaten the Witches twice already at Foxhall this season and made a terrific start racing into a six-point lead after two heats. However, the Witches responded instantly to turn it around and led the meeting from heat four onwards. Despite just a two-point lead after heat 12 following a successful tactical substitution ride from the Hammers, the hosts stayed strong and reeled off three heat advantages to seal the win and send the visitors home empty handed. Guest Scott Nicholls top scored with 13+1.

Richard Lawson won heat one ahead of Rory Schlein with Zach Wajtknecht third for an early heat advantage to the away side. They backed it up in heat two with a 5-1 thanks to Ben Morley and Alfie Bowtell. The home side sprang into action in heat three and did it the hard way as Adam Ellis gated and held an early lead. Riss passed the Hammers man on the opening lap before Covatti stayed patient and worked his magic to pass Ellis at the end of the third lap for a 5-1. The Witches produced another 5-1 in heat four thanks to Coty Garcia and guest Scott Nicholls to complete a rapid turnaround and lead 13-11.

Lawson was once again showing his liking for Foxhall and won heat five as the points were shared for the first time in the meeting. Ellis received a warning for moving at the start of heat six as Schlein won the re-run in a 3-3 with Cameron Heeps falling on the final turn whilst challenging Ellis for second. There was a talking point in heat seven as Ellis fell coming out of the second turn under pressure from Nicholls with the referee excluding the visiting rider from the re-run in what was a tough decision. Nicholls came out and won the re-run as the Witches recorded a 4-2. Heeps got off the mark in heat eight with a win and it looked set to be a 5-1 as Garcia held second only for Wajtknecht to pass him on the final lap meaning a 4-2 to the home side that gave them a 27-21 lead.

Lawson’s dominant form continued with a win in heat nine but both Covatti and Riss were in the points to prevent any heat advantage to the Hammers. Kyle Newman looked like he was going to win heat 10 after holding off severe pressure from Schlein but the Witches captain didn’t give up and passed the Lakeside rider on the final bend to give the home side a heat advantage that stretched their lead to eight. Lawson looked untouchable and won again in heat 11 as the away side picked up a 4-2 to cut the lead back down to six. Lawson was back out in heat 12 as a tactical substitute for Morley and it worked to perfection as he followed partner Ellis home for a 5-1 to leave the score delicately poised at 37-35 with three to race.

Guest Nicholls and Schlein calmed the nerves in heat 13 as they combined brilliantly to hit a crucial 5-1 to the Witches that edged them closer to victory and inflicted the first defeat of the night on Lawson. Heat 14 was stopped at the start of the third lap with the hosts on a 5-1 as Morley crashed and it was partner Newman who was excluded for being the cause of the stoppage. It didn’t matter though as Riss and Garcia came back out and re-produced the 5-1 they were on to seal the win for the Witches. Nicholls rounded off another impressive guest appearance for Ipswich with a win in heat 15 as Schlein gave it his all until the end nicking third on the line from Ellis for a 4-2 to leave the final score 51-39 to the Witches.

Zog Energy and Scott Properties Riders of the Night 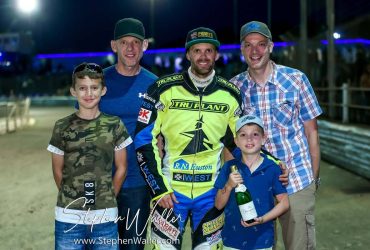 Schlein picked up both of the rider of the night awards after some determined riding and last ditch passing gave him a score of 11+1.

With just a two-point lead with three races to go things could have been nervy for the Witches but the experienced duo of Nicholls and Schlein did the business and all but sealed the win for the home side over a strong Lakeside team.

The Witches travel to Lakeside on Friday 3rd August in a Championship fixture.