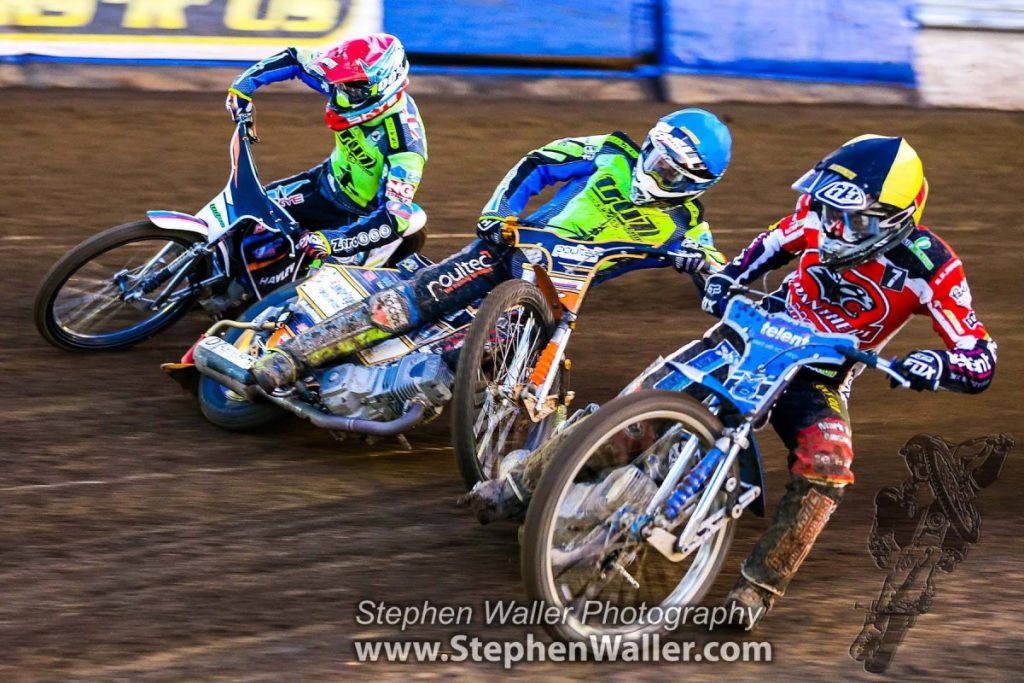 It was yet another convincing performance from the Witches who led from the off and the result never looked in any danger despite the visitors winning a tactical ride as early as heat five. The victory may have come at a cost as Cameron Heeps and Rory Schlein both picked up injuries with Heeps ending the night in hospital after a fall. Guest Mason Campton top scored with 12+1.

Danny King won heat one ahead of Chris Harris with Nathan Greaves in third to give the home side an opening heat 4-2. Greaves was out again in heat two and took the win as James Sarjeant took advantage of Connor Mountain locking up at the start of the second lap to take second meaning another 4-2 to the Witches. Guest Witch Campton won heat three and Heeps passed Paul Starke at the end of the opening lap to hit a 5-1 for the Witches. Heat four was stopped as Mountain and Schlein both fell after a tight first bend with all four called back for the re-run. Schlein picked himself up and won at the second attempt ahead of Jack Holder with Mountain picking up third as Tom Bacon fell on the third lap meaning the race was awarded as the Witches took a commanding 17-7 lead.

Harris was immediately sent out on a tactical ride to keep the Panthers in the tie and he duly won ahead of Heeps but with Campton third it was only a 6-3 to the visitors. Holder was the early leader in heat six but captain King passed the Australian going into the first turn of the second lap to take the win with Greaves third after Sarjeant had fell early on. Schlein won again in heat seven in a shared heat and Campton won in heat eight for the Witches as Greaves picked up another point for a 4-2 to give the Witches a 31-20 lead.

Holder won heat nine but he had to fend off severe pressure from Heeps who sadly fell whilst trying to pass his compatriot late on which gave the away side a 4-2 to keep them in touch in the meeting. However, the hosts then struck a 5-1 thanks to King and Heeps in heat 10 as victory edged closer. Heat 11 was called back as Sarjeant was warned to keep still at the start. Schlein continued his fine night with a win over Harris as that man Greaves was in third once again for another valuable heat advantage. Starke won heat 12 ahead of Mountain as Heeps fell and was then taken to hospital with the Witches leading 44-31 with three heats to race.

Schlein made it four wins from four with victory in heat 13 as the points were shared. The impressive Campton won again for the Witches in heat 14 in another 3-3. Holder won the final heat of the night ahead of King as Harris picked up third for a Panthers 4-2 which meant nothing in the end as the Witches took a 52-41 win, leaving the visitors empty handed in the derby.

Next Meeting: C2 31st August vs Redcar (away)