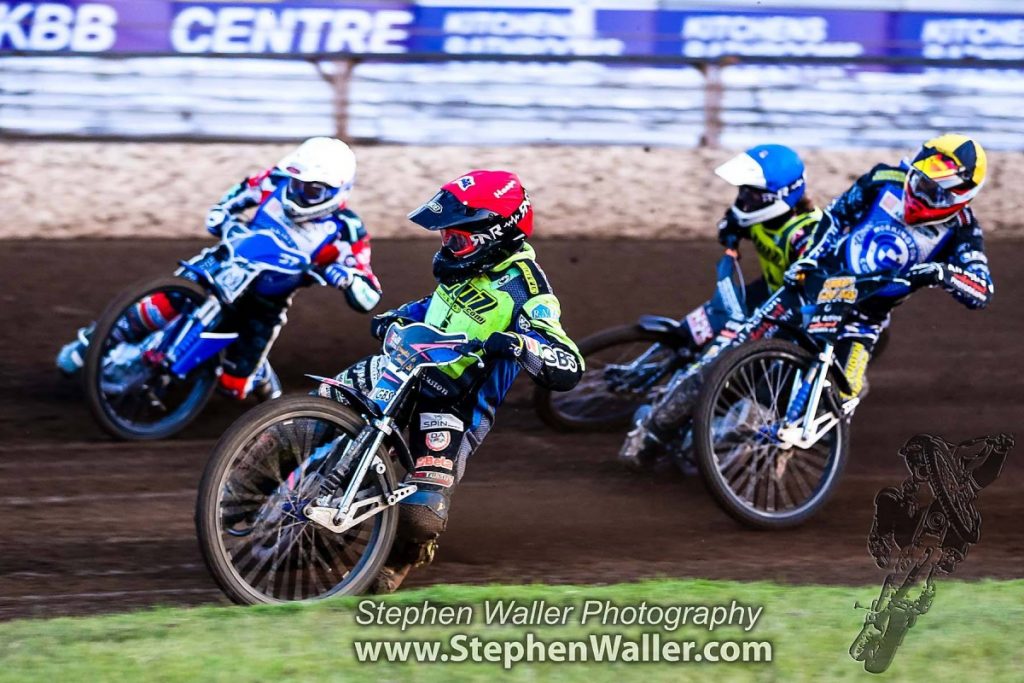 The ‘Tru7.com’ Witches made it three wins in a row with a 52-41 home victory over Workington on Thursday night at Foxhall in the Championship.

There was not much between the two sides in the early stages with Chris Harris proving to be a handy guest for the visitors. The Witches stretched the lead to 14 points mid meeting and looked to be heading for a comfortable win. However, the Comets recorded an 8-1 thanks to the tactical ride to put the cat amongst the pigeons but the home side were nerveless and sealed the win in heat 13 with a 5-1. Danny King top scored with 14.

Heat one needed a second attempt after Harris was warned to sit still. It looked like the away side were about to get off to the perfect start as they gated on a 5-1 but King passed Mason Campton early on before chasing Harris all the way as Kyle Newman got into third going into the final turn of the last lap to prevent the heat advantage. Heat two was also called back as James Sarjeant was the next away rider to be warned not to move at the start. It was the home pairing that made it stick in the re-run as Connor Mountain and Nathan Greaves coasted to a 5-1 to put the Witches ahead. The Comets made the gate again in heat three but Cameron Heeps worked his way into second on the opening lap but couldn’t catch the leader Ty Proctor as Justin Sedgmen retired whilst at the back meaning a 4-2 to Workington. Schlein passed both Comets on the opening lap of heat four to lead as Mountain claimed third for a 4-2 to give the Witches a 14-10 lead.

Greaves replaced Sedgmen in heat five as Harris won his second heat of the night ahead of Heeps as Greaves fell whilst in third meaning a 4-2 to the Comets to narrow the lead to just two points. There was yet another stoppage in heat six as Thomas Jorgensen was the next visitor to be warned for movement at the start. King won with ease in the re-run as Newman passed Jorgensen at the end of the first lap to join him at the front for a 5-1 to give the home side some breathing space. It was successive heat advantages to the home side after Schlein won heat seven ahead of Proctor who did well to hold off Greaves in third. Sarjeant jumped the start in heat eight and went off 15 metres in the re-run as Campton won a shared heat, meaning the Witches held a 28-20 lead.

Sarjeant then went through the tapes in heat nine as the visitors continued to struggle to keep still at the start and went from 15 metres in the re-run. Heeps got the better of Jorgensen in the re-run to win after a tough opening lap with Sedgmen hanging onto third for a 4-2 to the home side. King and Newman hit another 5-1 in heat 10 as the Witches closed in on victory going into the interval. Harris was sent out on a tactical ride in heat 11 and it worked to perfection as Campton led the race before allowing his partner through to take the win for an 8-1. Heeps and Proctor passed and re-passed each other to lead in heat 12 with the home man coming out on top as the points were shared, leaving the hosts 41-34 up.

It was the Witches’ turn to cause trouble at the start in heat 13 as King hit the tapes with his helmet and was warned. There was some terrific action in the re-run as King and Harris went toe to toe in the opening lap with the 2016 British champion edging ahead going into the third turn of the first lap, allowing Schlein to come underneath Harris and take second and record a 5-1 to seal victory on the night. Matt Williamson won heat 14 ahead of Greaves as Sedgmen retired as the away side claimed a 4-2. The final heat of the night was stopped with the home pair on a 5-1 as Proctor fell and was excluded. King won the re-run ahead of Harris with Schlein suffering machinery problems but still completing the race, leaving the Witches 52-41 winners on an entertaining night of action.

Next Meeting: C2 18th August vs Edinburgh (away)