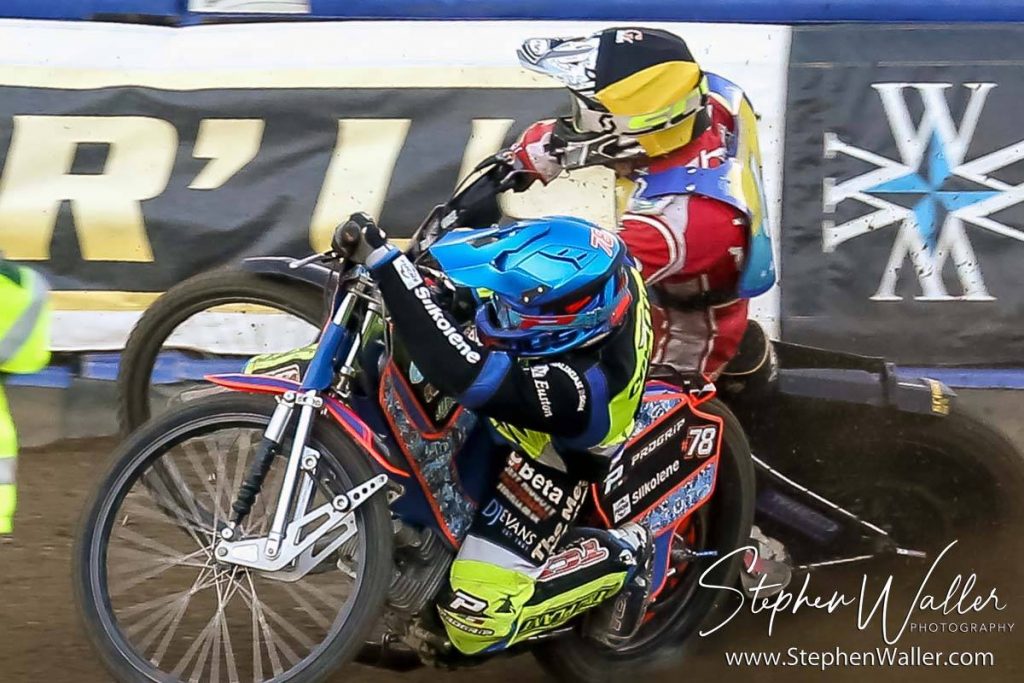 The ‘Tru Plant’ Witches produced a strong end to the meeting to beat the Edinburgh Monarchs 53-37 in the Championship at Foxhall on Thursday.

There was nothing to separate the sides throughout as the pair exchanged heat advantages and despite losing Danny King to injury, the home side hit three consecutive 5-1’s at the end of the meeting to give some gloss to the result. Nico Covatti top scored with 17+1.

Rory Schlein won heat one and it looked like it could have been an early 5-1 to the home side as Connor Mountain followed him for the first lap but the visiting pair both passed the Witches reserve at the end of the first lap for a shared heat. Coty Garcia and Max Ruml hit a comfortable 5-1 for the away side in heat two to give them an early lead. However, the Witches hit back in heat three with a maximum courtesy of Cameron Heeps and Nico Covatti. Monarchs guest Mason Campton won heat four as the points were shared leaving it all square at 12-12.

Covatti and Heeps produced a repeat of heat three in heat five as they put the home side ahead with another 5-1. Ricky Wells had managed to split the pair at the end of the first lap but fell later on in the race to gift a maximum to the Witches. Campton was showing why the away side picked him as a guest as he beat Schlein in heat six with Garcia third for a 4-2 to the Scottish side. Mark Riss won heat seven ahead of Danny King with Josh Pickering picking up a point after passing Mountain for a 4-2 that levelled the score. Joel Andersson was a faller on the first turn of heat eight and was excluded from the re-run. Covatti won the re-run as Danyon Hume held off Ruml for second giving the Witches a 5-1 that put them 26-22 up.

Heat nine was stopped as Covatti collided with Garcia on the fourth turn with the Witches man excluded from the re-run. Campton won again in the re-run fending off Heeps for a heat advantage to the away side. Mark Riss led heat 10 but suffered engine problems leaving Schlein to win ahead of Pickering with Hume third for a Witches 4-2. There was a blow for the Witches as captain King withdrew from the meeting with a re-occurrence of his arm injury. Covatti came in to replace him in heat 11 and duly won with Mountain third for a crucial 4-2 to the hosts to put them six up. Campton then came in as a tactical substitute for the visitors in heat 12 and continued his stunning form with another win ahead of Hume but Pickering produced a great final bend to pass Heeps for third for a Monarchs 4-2 to leave the score 38-34 to the home side.

Heeps and Schlein hit a huge 5-1 in heat 13 to edge the home side closer to victory. Covatti then produced a fantastic opening turn to swoop round the pack and lead and there was a titanic battle for second between Mountain and Garcia as the visiting reserve took second going into turn three of the final lap but the home reserve came back to edge him out on the line for a 5-1. The strong end to the meeting went on as the home side finished the night with another 5-1 thanks to Covatti and Schlein to give the Witches a 53-37 win. 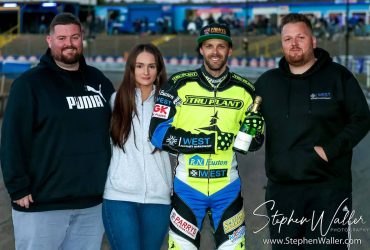 With King out of the meeting as the contest reached crunch time and with just four points between the sides, Heeps and Schlein’s 5-1 in heat 13 was crucial and put the home side on the verge of victory when things could have got nervy.

The Witches are next in action at the Championship Fours at Redcar on Sunday 1st July.