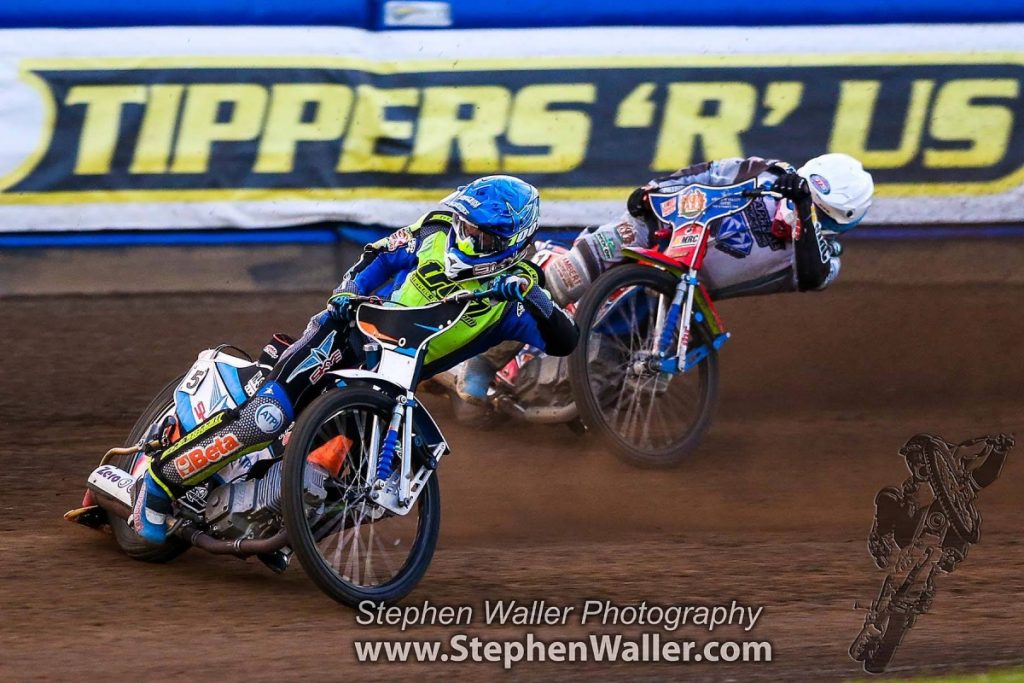 The ‘Tru7.com’ Witches kept their immaculate home record in tact after a comfortable 54-39 win over Newcastle to go back to the top of the Championship.

The home side hit the visitors hard in the early heats and built up a 14 point lead after just four heats which left the Diamonds with a mountain to climb. The away side steadied the ship during the middle part of the meeting but the Witches had plenty in reserve to finish off the job and claim a convincing win. Cameron Heeps top scored with 12 for the Suffolk side.

Danny King set the tone for the evening as he teamed up with Kyle Newman to record a 5-1 in heat one. Nathan Greaves looked like sealing a heat two win as Connor Mountain cut up the inside of Ben Hopwood to take second on the second lap but Jack Thomas fell on the fourth turn of the same lap and was excluded. It didn’t affect the Witches duo in the re-run as Greaves and Mountain eased to a maximum. The home side’s superb start continued as Heeps and Justin Sedgmen made it three 5-1’s to start the night in style. Mountain was a victim of first bend bunching in heat four as all four riders were called back for the re-run. Rory Schlein made the gate from gate four in the re-run as Mountain held off Steve Worrall for two laps before the visiting captain passed the Witches reserve for second. A 4-2 left the home side in complete control with a 19-5 lead.

Heeps got his second win of the night in heat five as the points were shared. Steve Worrall held off King in heat six as the Witches skipper chased him all the way before losing ground late in the race resulting in another 3-3. Schlein won heat seven as Greaves was never too far away from getting in the points but it was another shared heat. Steve Worrall was sent out on a tactical ride in heat eight and won convincingly to clock up six points for a 6-3 to give the away side a glimmer of hope with the score 31-20 to the Witches.

Steve Worrall was back out again in the following heat and held off the hard charging Heeps for another share of the spoils. However, the home side extended the lead in heat 10 as King and Newman carved up the opposition for a 5-1. Robert Lambert got his first win of the night as Schlein was beaten for the first time and the points were shared. Heeps was in excellent form and won heat 12 as Mountain picked up third for a 4-2 to seal victory with the score 46-29.

Heat 13 was the heat of the night between Schlein and Lambert. Lambert made the gate and went down the back straight of the first lap leading but Schlein held the inside line on the third and fourth turn to go up the inside of Lambert heading into the second lap. Lambert responded by diving up the inside of Schlein going into the first bend of the second lap but Schlein anticipated the move and switched back to the inside to take the lead down the back straight and didn’t look back as King took third for a 4-2. Ashley Morris won heat 14 in a 3-3 before the Diamonds ended the night with a 5-1 thanks to Steve Worrall and Lambert but it was the Witches that took all the points after a 54-39 win.