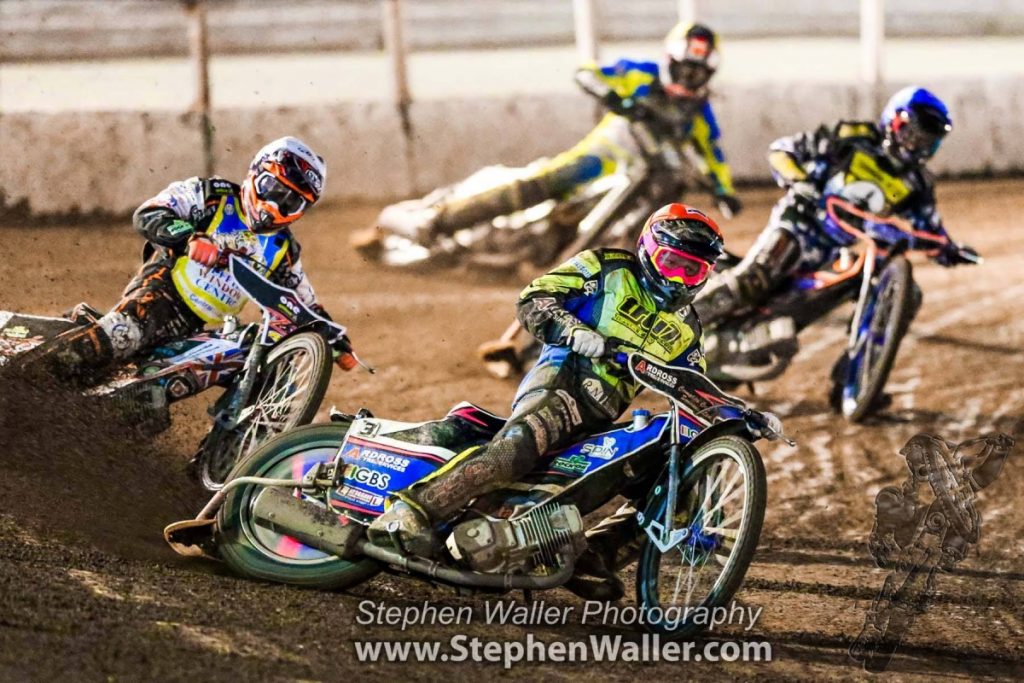 The ‘Tru7.com’ Witches produced a terrific comeback to beat Sheffield 55-35 at Foxhall and progress to the Knockout Cup final after a 94-86 aggregate win.

The home side had 12 points to make up after defeat at Owlerton on Thursday and they started the meeting in dominant fashion building a 10 point lead after just four heats to give the home fans hope. The Tigers got into the meeting in the middle part of proceedings but the Witches found a second wind and hit two 5-1’s in heats 12 and 13 to put them on the brink of the final. The away side recorded a 4-2 in heat 14 but it wasn’t enough as the hosts sealed their spot in the cup final with a heat to spare. Nathan Greaves top scored with 13+2 on the night.

The home side started well as Danny King and Mason Campton were quickest from the gate but Scott Nicholls got past Campton on the third lap to split the Witches pair resulting in a 4-2. Greaves continued the good start for the Witches with a win in heat two ahead of Jan Graversen with Connor Mountain taking third to double the lead. The Witches piled the pressure onto the away side in heat three as they hit a 5-1 to put them within four points on aggregate. Lasse Bjerre was an early leader but Campton made his way to the front as Heeps worked his way from the back to get into second going into the third lap before passing his teammate to win the race. The hosts were flying and guest Ty Proctor won heat four as Mountain held second until the final bend where Bjerre passed him, meaning a 4-2 put the home side 17-7 up and just 56-58 down on aggregate.

Things went badly in heat five as Heeps fell on the second turn and was excluded from the re-run. Nicholls and Todd Kurtz punished the hosts in the re-run and hit a 5-1 as Campton struggled with bike issues throughout. Josh Bates won heat six in a shared heat as the visitors worked their way into the meeting. The home side got back on the front foot though and stormed to a 5-1 in heat seven as Greaves gated and won with Proctor passing Bjerre on the second lap to join his partner at the front. Heeps won heat eight as the points were shared leaving the Witches 29-19 up and 68-70 down on aggregate.

Heeps was back out in heat nine and fended off Nicholls to win as Campton finished third for a 4-2 that levelled the scores on aggregate. King won heat 10 comfortably as the points were shared. Nicholls won heat 11 in another 3-3 as both sides refused to give in. There was drama in heat 12 as Bjerre fell and was excluded from the re-run. The Witches took advantage and recorded a maximum heat advantage to edge ahead on aggregate thanks to Heeps and Greaves, making it 44-28 on the night and 83-79 on aggregate.

There was more drama in heat 13 as Nicholls went through the tapes to the joy of the home fans and went off 15 metres in the re-run. The home side took full advantage in the re-run as Proctor and King banged in another 5-1 to put the Witches on the brink of reaching the final. Bates won heat 14 and it looked as though it might be going to a last heat decider as Graversen passed Greaves on the final bend but the Witches reserve powered back past the Tigers man to take second and put the Witches in the final. King finished the night in style as he won heat 15 with Nicholls passing Proctor to take second meaning another 4-2 to the home side making the final score 55-35 and 94-86 on aggregate.