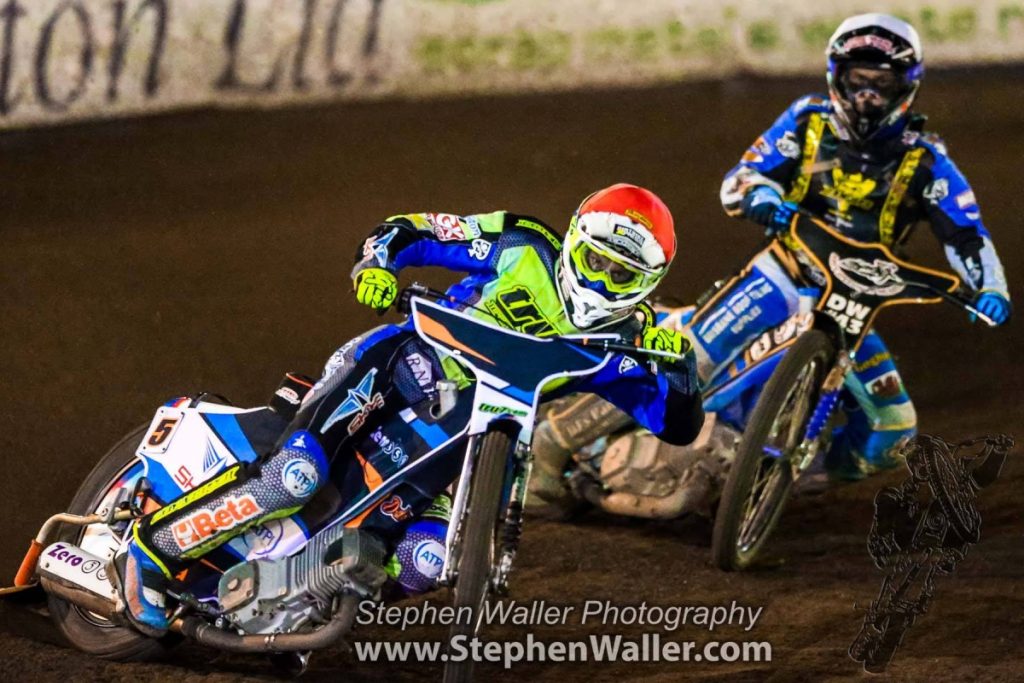 The ‘Tru7.com’ Witches finished their home league campaign with a convincing 56-36 win over Berwick Bandits at Foxhall on Thursday.

The result mathematically confirmed the Suffolk side’s place in the play-offs ahead of three tough away trips to end the regular league season. The Witches raced into an eight point lead early on but the visitors battled hard in the middle of the meeting to keep things tight and reduce that lead to six points. The Witches came on strong in the latter part of the meeting and won comfortably to send the home fans home happy. Rory Schlein top scored with 14 from five rides.

Danny King got his almost customary heat one win ahead of David Howe with Nathan Greaves doing excellently to keep Bandits number one Nick Morris at the back for 4-2 to start the evening for the Witches. Visiting reserve Jye Etheridge was warned for movement in heat two but won the re-run ahead of Greaves and Connor Mountain in a shared heat after they both passed Alfie Bowtell. Heat three brought the first 5-1 of the night for the Witches as Lewis Kerr and Kyle Newman took the chequered flag. Rory Schlein eased to victory in heat four as Bowtell won the battle for second after a tight first lap with Mountain but it was another heat advantage to the home side to put them 16-8 up.

Morris got his night started with a win in heat five ahead of Kerr as Kevin Doolan picked up third for the first Bandits heat advantage of the evening. Foxhall was then plunged into darkness as the generator failed and the floodlights went out at the start of heat six. After a lengthy delay the action got back underway and Howe produced a shock to beat King in a shared heat. Schlein made it two wins from two in heat seven as the sides shared the points again with the Bandits staying in touch. Morris was warned for jumping the start in heat eight but like his teammate earlier in the night he came out in the re-run and won ahead of Kerr and Mountain as the points were shared for a third consecutive heat leaving the Witches 27-21 up.

The Witches broke the run of 3-3’s in heat nine as the duo of Kerr and Newman repeated their exploits from heat three again to give the Witches a ten point lead. The meeting looked like it was heading towards another Witches win after heat 10 as King and Newman made it consecutive 5-1’s to put the away side in tactical territory. Morris was sent out in the black and white helmet in heat 11 as rain started to fall but Schlein was unbeatable once again, rounding Morris on the third and fourth bends of the opening lap to take the win as Greaves beat Etheridge to third for a 4-4. Kerr continued his impressive guest appearance at Foxhall with another win in heat 12 as victory was sealed with a shared heat, giving the home side a 44-30 advantage with three heats to go.

Morris won heat 13 to end Schlein’s unbeatable night as Howe picked up a point for a 4-2 to the visitors. Heat 14 was stopped after Bowtell fell on the second lap, taking Greaves with him and the Bandits man was excluded from the re-run. The home side were not letting off and recorded another 5-1 courtesy of Newman and Greaves in the re-run. Morris was then excluded in the final heat of the night for jumping the start for a second time on the night and he went off 15 metres in the re-run. The home side finished the night in style as Schlein and Newman added another 5-1 to give the Witches a comprehensive 56-36 win.

Next Meeting: C2 8th September vs Edinburgh (away)