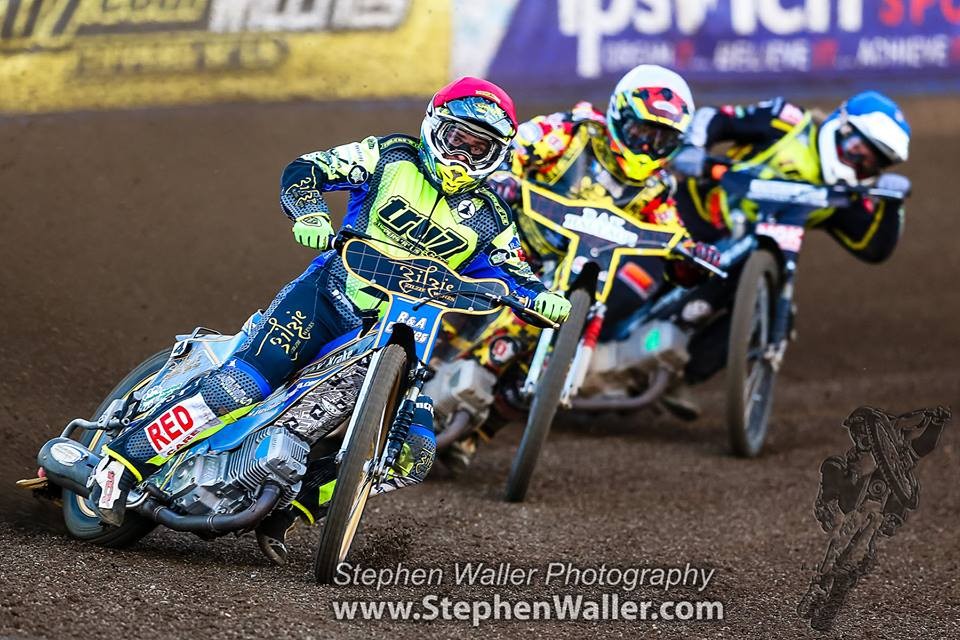 The ‘Tru7.com’ Witches recorded a comfortable 56-37 win over Berwick Bandits on Thursday evening at Foxhall.

The visitors, who sit bottom of the Championship, came with a severely depleted line-up and the result was never in doubt as the home side dominated from the off. The away side battled hard but the Witches were in complete control of the tie as captain Danny King reeled off a 12-point maximum.

The skipper got the ball rolling in heat one with a win as Cameron Heeps picked up third to immediately put the Witches ahead. There was plenty of twitching at the tapes in heat two and Jye Etheridge touched the tapes and went off 15 metres in the re-run. Nathan Greaves and Connor Mountain eased to a 5-1 as the home side started strongly. Heat three was brought back after more movement at the start but it didn’t affect the Witches duo of Justin Sedgmen and Kyle Newman as they hit a second 5-1 of the night. Rory Schlein won heat four as Greaves picked up a point to give the Witches an 18-6 lead after just four heats.

The visitors sent out guest Sam Masters in the black and white helmet in heat six and the Australian beat his compatriot Sedgmen to record a 6-3 heat advantage to the Bandits. King made it two wins from two in heat six as Heeps squeezed past the Bandits duo on the back straight of the opening lap to join his teammate at the front and record another 5-1. Schlein won heat seven as the points were shared for the first time on the night. Heeps won heat eight as Greaves fell on the third turn of the final lap whilst pushing hard to get into the points. A 3-3 left the Witches 32-19 up and in control.

Sedgmen was a faller on the first turn of heat nine and was excluded from the re-run. However, Newman flew from the gate and won to ensure another shared heat. Heat ten had to be stopped as Heeps fell on the third turn of the second lap with Alfie Bowtell doing well to avoid hitting the Witches man. King won the re-run in another 3-3 as the visitors continued to battle hard. Masters was the first man to beat Schlein in heat 11 and Ben Morley picked up third for a rare Bandits heat advantage. Sedgmen won heat 12 ahead of David Howe as Greaves passed Etheridge coming out of the fourth turn on the opening lap in a 4-2 that gave the Witches a 44-31 lead with just three heats remaining.

King completed his maximum in heat 13 as he beat Masters and Schlein picked up third for another 4-2 to the home side. Newman won heat 14 ahead of Kevin Doolan with Mountain picking up a point as the Witches continued to end the night with a flurry of 4-2’s. Sedgmen won the final heat of the night ahead of Masters with Newman in third for a final 4-2 of the night to leave the final score 56-37 to the Witches.

Next Meeting: C1 16th June vs Edinburgh (away)