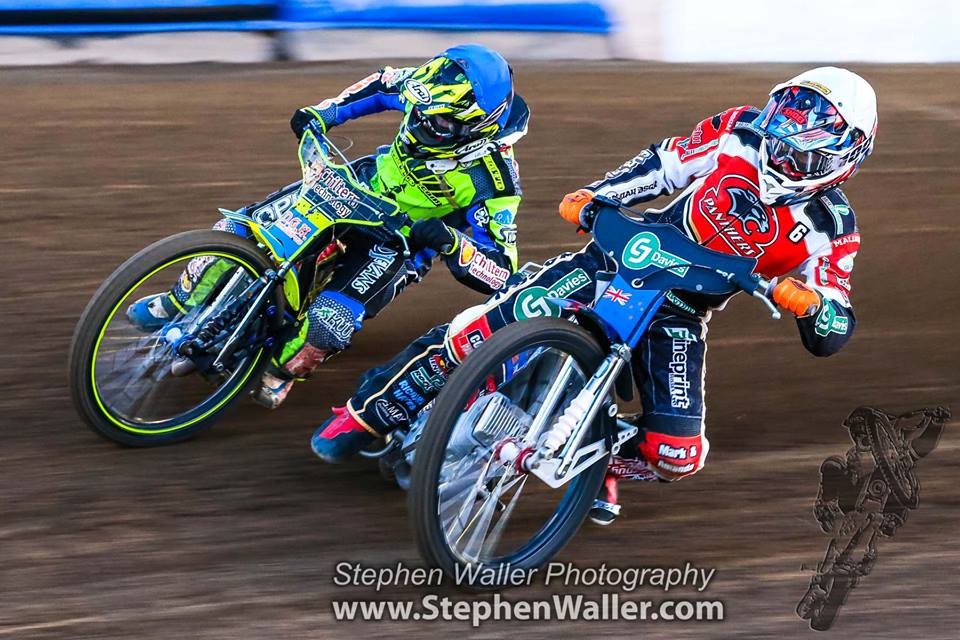 The ‘Tru7.com’ Witches were again in dominant form at Foxhall as they put local rivals Peterborough Panthers to the sword, running out 60-32 winners in the Championship.

It was a tight opening to the meeting but the Witches went up the gears as the meeting went on and eased to victory, inflicting the first competitive defeat of 2017 on the Panthers. Cameron Heeps was the Witches top man scoring 12+2 whilst Danny King recorded another maximum from four rides.

Heat one had to be restarted as the tapes went up early and sadly for the Witches, James Sarjeant touched the tapes in the re-run and was excluded. Danny King swooped round Jack Holder on the first turn to hit the front and claim the first win of the night for the Witches as Sarjeant’s replacement Danyon Hume held off Simon Lambert for third. Bradley Wilson-Dean looked at home on the Foxhall surface and got the win in heat two with the Witches pair of Hume and Connor Mountain in second and third. It was then the Panthers’ turn to go through the tapes as Paul Starke was impatient at the start and was excluded. Wilson-Dean replaced Starke and was a winner again for the away side and it looked like it was going to be a 5-1 to the visitors but Cameron Heeps hunted down Ulrich Ostergaard before passing the Panthers captain on the final bend to split the pair. Tom Bacon was a faller on the first turn of heat four and was excluded from the re-run. Hume and Rory Schlein were quickest from the gate in restart and Schlein rode his team mate home the first 5-1 of the night to give the Witches a 14-10 lead.

Nico Covatti was a comfortable winner in heat five as Heeps worked his way through the traffic, first passing Lambert for third before seeing off Holder to join his teammate at the front for a 5-1. It looked like being three maximums on the trot for the Witches as King and Sarjeant were way out in front in heat six but Sarjeant fell on the third bend of the third lap with Wilson-Dean laying the bike down to avoid the falling Witch. The race was awarded as a shared heat. Wilson-Dean was in the wars again in heat seven as he fell on the first turn in heat seven but all four riders were recalled for the re-run. Mountain fell on the first turn in the re-run but Schlein won the heat for a 3-3. Hume and Sarjeant recorded another Witches 5-1 in heat eight as the Witches extended their lead to 30-18.

The Witches were now turning the screw and Heeps and Covatti inflicted more pain on the visitors with another 5-1 in heat nine as Heeps got faster and faster on the night. There was a nasty incident in heat 10 as Ostergaard fell on the first turn with partner Wilson-Dean colliding with his team mate. The Dane was excluded as both were able to walk away from the incident. In the re-run King and Sarjeant hit another 5-1 to all but seal the tie. Holder was sent out on a tactical ride in heat 11 as the Panthers played their last card of the night but Schlein won the battle of the Aussies with Mountain third to cancel the tactical ride out. Wilson-Dean’s impressive night continued as he collected another win in heat 12 as the spoils were shared leaving the score 47-27 to the Suffolk side.

King completed his maximum in heat 13 with Schlein third for a 4-2, meaning the captain is yet to be beaten by an opponent at Foxhall in 2017. There were only three riders in heat 14 as Ostergaard did not come to the tapes and Heeps eased to victory with Bacon splitting the Witches pair after Mountain locked up early on in the race. The Aussie duo of Schlein and Heeps completed a fantastic night’s work for the Witches in heat 15 as they raced to a 5-1 to give the home side a 60-32 win in the East Anglian derby.

Next Meeting: C1 17th April vs Peterborough (away)