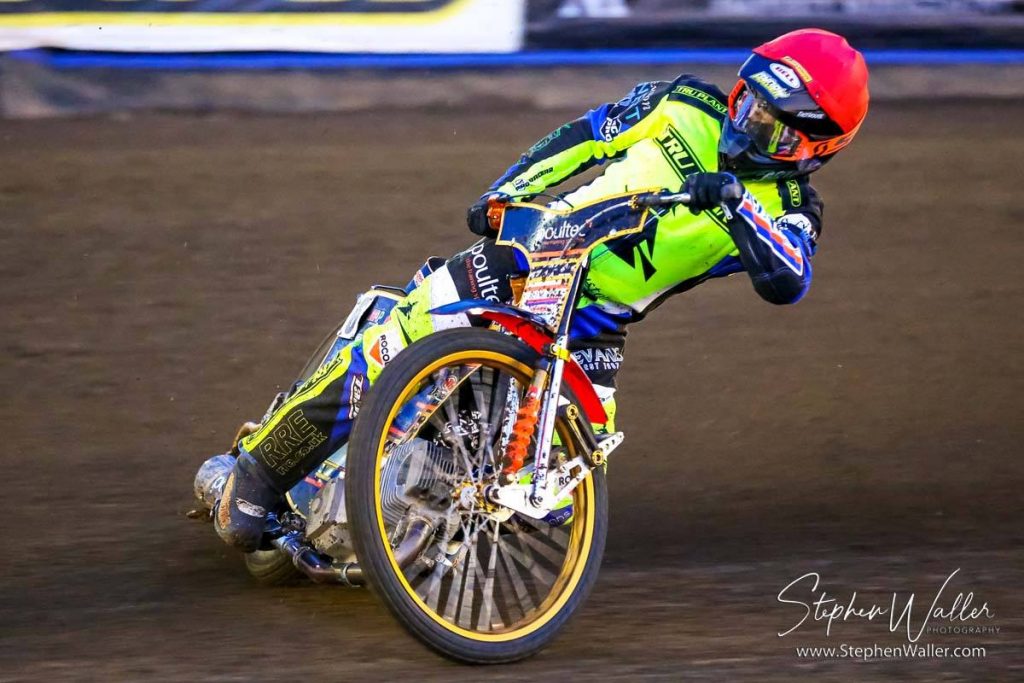 The ‘Tru Plant’ Witches suffered a 54-35 defeat at the hands of the Lakeside Hammers on Friday evening that leaves them still searching for their first points of the Championship Shield group stage.

The Witches started brightly on the night and kept the home side within striking distance up until heat 10. However, hopes of any away points faded from then on as the hosts got stronger and stronger and won in comfortable fashion, leaving the Witches with a huge mountain to climb if they are to progress. Danny King top scored with 12 from six rides for the visitors.

King flew from the traps in heat one to win comfortably in a shared heat to open the meeting. Connor Mountain made it two wins from two for the away side as he took all three points with Danyon Hume picking up third to put the Witches ahead early on. Rory Schlein looked like he was going to make it three heat wins for the Suffolk side but Adam Ellis swooped round the Australian on the final bend to take the win on the line with Kyle Newman third for a 4-2 to the Hammers to level the score. Richard Lawson won heat four as Alfie Bowtell did well to keep Nico Covatti behind him all race, meaning a 5-1 to the home side that gave them a 14-10 lead.

Ellis won heat five and was followed home by Newman for consecutive 5-1’s to the home side. Nick Morris won heat six ahead of Mountain but Covatti locked up and fell whilst in third on third turn of the opening lap, meaning another heat advantage to the home side that stretched their lead. Schlein stormed to victory in heat seven but Cameron Heeps couldn’t manage to stay in the points and was passed by Zach Wajtknecht on the third lap for a shared heat. Heat eight was stopped as both Ben Morley and Michael Härtel fell on the opening turn and both were excluded by the referee. Mountain won the match race in the re-run for a 3-2 that left the Hammers 28-19 up.

Covatti got his first race win of the evening in heat nine as the points were shared to keep the Witches in the hunt for a positive result. Morris won again in heat 10 and it looked like being a 5-1 to the home side with Morley behind him but Schlein did fantastically to pass the home rider for second coming out of the second turn of the final lap to limit the damage to a 4-2. Lawson was in fine form on the night and got the better of King on the opening lap to win heat 11 with Wajtknecht third for a 4-2. Ritchie Hawkins put King in for a tactical substitute ride in heat 12 but he couldn’t beat Ellis who took the chequered flag in a shared heat that made it 42-29 to the home team.

Lawson beat King again in heat 13 with Morris third for a 4-2 to the Hammers. Wajtknecht won the penultimate heat of the night as Newman passed Hume for third but he couldn’t find a way past the excellent Mountain for second, meaning a third 4-2 on the trot. Lawson and Ellis looked like rounding the night off with a 5-1 but King produced a superb move on the second lap to pass Ellis and split the home pair. A 4-2 made the final score 54-35 to Lakeside, giving them all three points and sending the Witches home empty handed.

Mountain was the star for the Witches, scoring 10 points from five rides. He took two heat wins on the night and a fantastic second place as he held off heavy pressure from Newman in heat 14.

With the hosts looking like they were going to take the win on the night, it became about trying to claim an away point going into heat 12, with King coming in as a tactical substitute. However, Ellis kept both King and Schlein behind him, all but ending any hopes of taking anything away from the meeting for the away side.

The ‘Tru Plant’ Witches are back in action on Saturday 21st April when they host Lakeside Hammers at Foxhall in the Championship Shield.