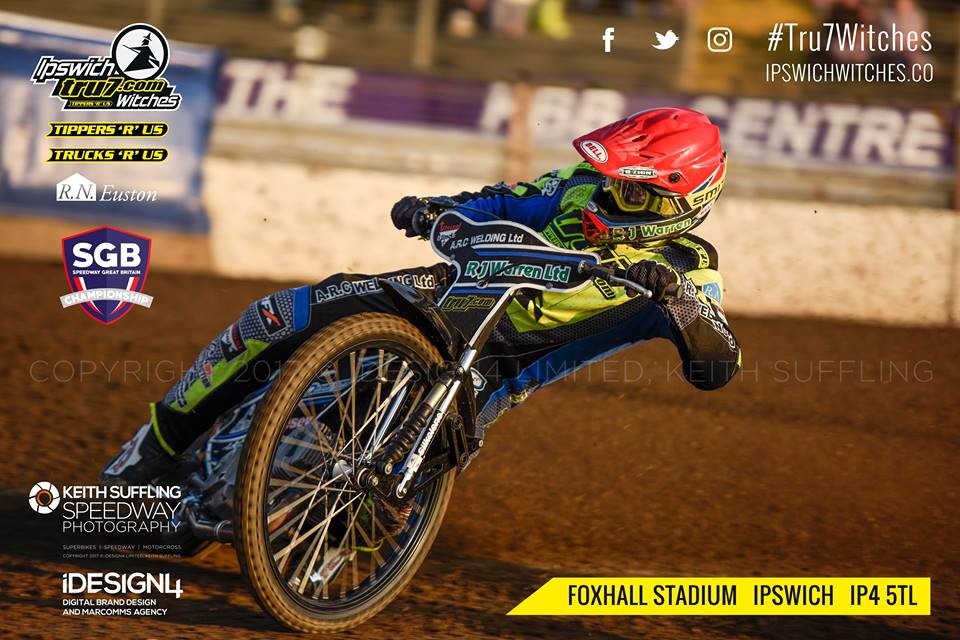 The ‘Tru7.com’ Witches claimed a point after narrowly missing out on an away win at Peterborough, falling to a 48-42 defeat in the Championship on Sunday.

The visitors started brightly and took an early lead after four heats but the home side overturned the deficit to lead by two points after eight heats. A string of shared heats took it to a last heat decider which the Panthers emphatically won with a 5-1 to seal victory. Danny King top scored with 10+1 for the Witches as Jack Holder roared to a 14+1 paid maximum for the home side.

The Witches made their intentions clear from the off as King took the first heat with partner Kyle Newman coming from the back to join him at the front for an opening heat 5-1. Tom Bacon produced an impressive ride in heat two to pass both Witches riders, first Connor Mountain on lap two before hitting the front on the final lap after going past Nathan Greaves but it was a shared heat that kept the away side ahead. Heat three was called back with Panthers captain Ulrich Ostergaard warned to keep still at the start. However, there was bad news for the Witches in the re-run as Cameron Heeps failed to make the two minutes and had to start from 15 metres. The warning did not affect Ostergaard as he won heat three with Justin Sedgmen splitting the home pair, meaning the Panthers clawed a couple of points back. Jack Holder won heat four ahead of compatriot Rory Schlein as Mountain picked up third to share the points, leaving the Witches 13-11 up.

King was in the mood and won heat five after a close battle with Ostergaard early on and Newman rounded Paul Starke to take third for a second Witches heat advantage of the evening. The home side drew level in heat six as Josh Grajczonek was a convincing winner with partner Bradley Wilson-Dean holding off Schlein for second, as the Witches man fell on the final turn. Heat seven was another to be pulled back with Holder this time warned. The re-run didn’t get past the first turn as a competitive start saw Heeps, Holder and Liam Carr all fall but all four riders were called back for the third attempt of heat seven. Holder was in fine form to pass both Witches riders to take the win as the points were shared in the third attempt of the heat. Wilson-Dean was a clear winner in heat eight ahead of Mountain but with Newman retiring on the first lap, a 4-2 to the Panthers gave them a 25-23 lead.

Schlein got his first heat win of the meeting in heat nine as the points were shared. Sedgmen led heat 10 but he couldn’t hold off Grajczonek, who took the win with Heeps swooping round Wilson-Dean for a valuable third to share the points. Holder made it three from three as it was King who surrendered his 100% record in heat 11 but with Newman third is was another 3-3. Starke won heat 12 but once again the Witches were in the points as Heeps and reserve replacement Mountain picked up second and third, leaving it finely poised at 37-35 to the home side with three to race.

Holder was in imperious form on the day and won again in heat 13 but the Witches were holding strong and Schlein and King filled the minor placings in another shared heat. Nerves got the better of home skipper Ostergaard in heat 14 as he hit the tapes and went from 15 metres in the re-run. Sedgmen won at the second attempt ahead of Bacon but Mountain couldn’t keep Ostergaard at the back meaning another shared heat to take it to a last heat decider. It was the Panthers who sealed the win as Grajczonek and Holder finished with a 5-1 over King and Schlein for a 48-42 win.