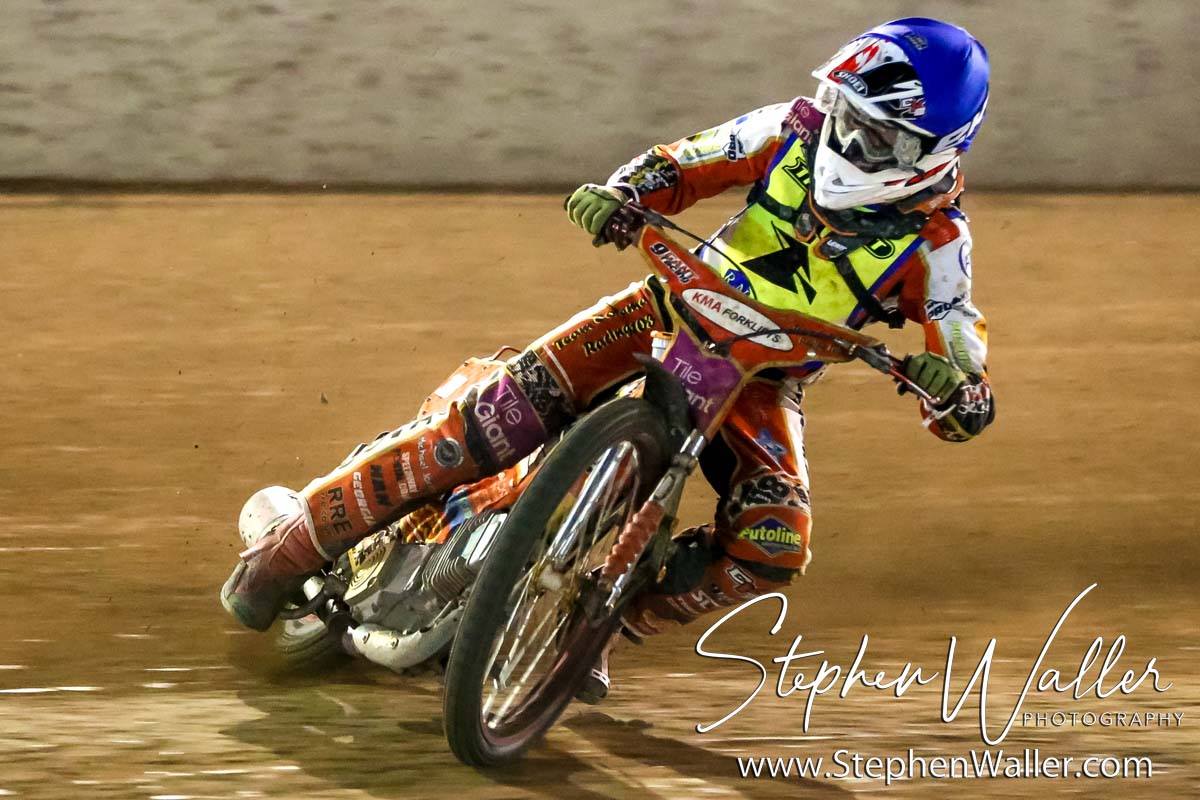 The ‘Tru Plant’ Witches produced a stunning performance on Friday night as they hammered Scunthorpe 59-30 in the Championship.

After a defeat at home to Peterborough at Foxhall on Thursday night, the Witches were desperate to put things right at the Eddie Wright Raceway and they did so in emphatic fashion.  After a tight opening four heats the Witches turned on the style as they recorded maximum after maximum in a dominant win. Guest Scott Nicholls top scored with 16+1 after several maximums with Cameron Heeps but it was a night to remember for Drew Kemp as he scored 12+2 from reserve at just 16 years old.

Steve Worrall won heat one for the home with Nicholls and Heeps behind him for a shared heat. It was a moment to remember in heat two as Kemp won his first race for the Witches and it was nearly a 5-1 until Gino Manzares passed Coty Garcia on the line to limit the damage to a 4-2 to the away side. Heat three was stopped when Nico Covatti fell and brought down Jason Garrity and Mason Campton and the Witches man was excluded from the re-run. The home side took advantage in the re-run as they hit a 5-1 to take the lead. Heat four was stopped as Manzares was a faller in the first turn as all four were called back. The second attempt at heat four was unsuccessful as the tapes failed to go up correctly. It was worth the wait for the Witches when the heat finally got going as Kemp made it two wins from two and was followed home by Covatti for a Witches 5-1 to give them a 13-11 lead.

It got better for the away side in heat five as Nicholls won and Heeps swooped round the Scorpions duo on the third bend of the opening lap for consecutive 5-1’s to the away side. Worrall was a faller in heat six at the start of the second lap and was excluded from the re-run. His partner Stefan Nielsen then hit the deck in the re-run whilst at the back, with the race awarded as a 5-0 to the Witches with Garcia and Kemp at the front. The Witches were flying and racked up another 5-1 in heat seven thanks to guest Broc Nicol and Covatti. The onslaught continued in heat eight as Nielsen retired on the opening lap and then both Kemp and Heeps passed Manzares on the fourth turn of laps one and two respectively for another 5-1. That left the away side 33-14 up and running riot.

The run of maximums was stopped in heat nine as Garcia fell on the first turn but Nicholls won for a 3-3. It was not Scunthorpe’s night as number one Worrall was then withdrawn from the meeting after his earlier crash. The heat advantages returned in heat 10 for the away side as Covatti passed Garrity on the final turn to win with Nicol third for a 4-2. The 5-1’s returned in heat 11 as Heeps and Nicholls won from the gate. The home side gave their fans something to cheer in heat 12 as Manzares and Garrity recorded a maximum but it was too little too late with the Witches 46-25 up.

Nicholls and Heeps piled on more misery for the home team in heat 13 as they added another 5-1 to the collection. Garrity came in as a tactical substitution in heat 14 as the hosts looked to restore some pride. Garrity duly won ahead of Nicol but they were denied a heat advantage as Manzares pulled up whilst in third on the final lap gifting Kemp a point, who had fallen earlier in the race and remounted. The night ended with yet another 5-1 from Nicholls and Heeps to give the Witches a huge 59-30 win and four league points.

Young Kemp will remember this night for the rest of his life. Not only did he win his first race for the Witches but he went on to win two more as he scored 12+2 from five rides.

With the Witches already six up going into heat six, the Scorpions needed to respond. However, both Nielsen and Worrall fell, giving a 5-0 to the Witches as they lost their number one for the rest of the night in the process. The writing was on the wall for the home side at that point, as the Witches got better and better.

The Witches are next in action at Foxhall against Scunthorpe on Thursday 30th August in a Championship clash. Kids go free to this meeting.