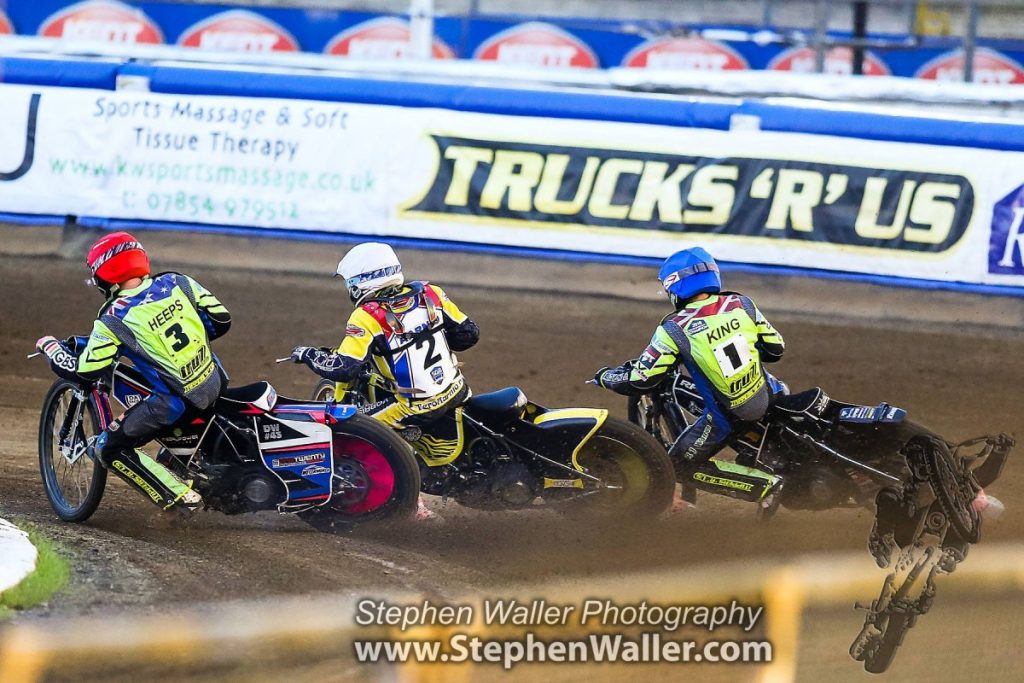 The ‘Tru7.com’ Witches produced a late comeback to beat Scunthorpe 47-43 on Sunday in the Championship.

The Suffolk side had started brightly and were leading after the early heats but the home side came on strongly in the middle of the meeting and looked to be heading to victory. However, the Witches fought back in the closing stages to clinch a narrow victory. Danny King top scored with 13+1.

Michael Palm Toft won the first heat of the evening ahead of the Witches pair of King and Kyle Newman for a 3-3. The hosts edged ahead after heat two with Josh Bailey beating Nathan Greaves as Tero Aarnio picked up third for a 4-2. Lewis Kerr retired in heat three with mechanical issues on the opening lap as Cameron Heeps and Ryan Douglas traded moves to lead with the Witches man making it stick on the third lap to take the win in a 4-2 to the away side. Heat four was called back after Josh Auty fell in a tight first corner. Rory Schlein won the re-run as Mountain picked up third to put the visitors 13-11 up.

Heat five was stopped after Kerr locked up on the fourth turn of the opening lap causing Newman to collide with him, as the home rider was excluded from the re-run. King notched the win as the Witches extended their lead with another 4-2. It was all level after heat six though as Auty rounded everyone on the first turn to take the lead and Palm Toft followed him home for a 5-1 to the Scorpions. The home side then went ahead in heat seven as they hit consecutive maximums thanks to Aarnio and Auty. Douglas won heat eight as the points were shared leaving the home side leading 26-22.

Heat nine was awarded after Greaves fell on the final lap, with Kerr leading at the time ahead of Schlein, who had battled past Douglas for second but another heat advantage extended the hosts’ lead. Heat 10 was also awarded as Greaves fell again whilst in third on the final lap. Heeps was the winner but the Witches had to settle for a shared heat. King won heat 11 in style but Newman couldn’t get amongst the points meaning another 3-3. The away side got themselves back in the tie with a big 5-1 in heat 12 thanks to Heeps and Mountain making it 37-35 to the home side.

The Witches then put themselves ahead after heat 13 as Schlein and King recorded another 5-1 from the gate. Heat 14 was stopped as Aarnio fell on the first turn with all four called back. The re-run was another race to be awarded as Heeps took the win ahead of Douglas with Aarnio falling whilst trying to pass Greaves for third. King sealed the win with victory in heat 15 as the points were shared, leaving the final score 47-43 to the Witches.