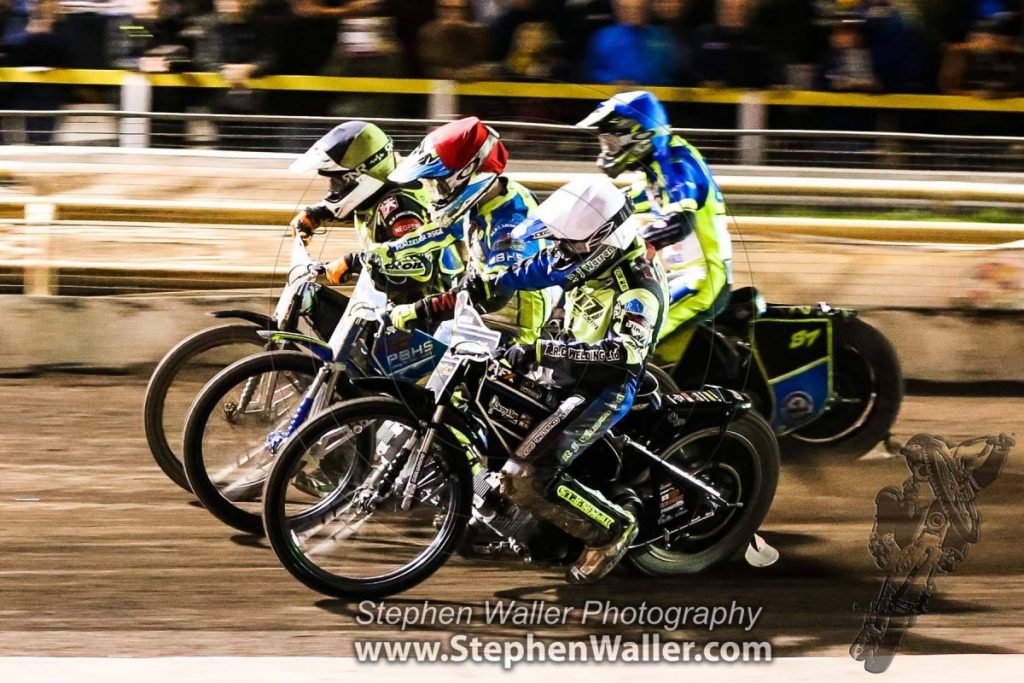 The ‘Tru7.com’ Witches will need to overturn a 12-point deficit in Friday’s second leg after they went down to a 51-39 defeat at Sheffield on Thursday night in the Knockout Cup semi-final first leg.

The champions edged ahead early on but the Witches were keeping them within striking distance going into heat seven. Kyle Newman suffered a heavy fall in heat seven and was withdrawn from the meeting, making the task even tougher for the away side. The home side increased their lead to 12 but Danny King and Ben Barker hit the Witches’ only heat advantage of the night in heat 13 to reduce that lead to eight points. However, the home side hit back in heat 14 to restore their 12-point advantage as Barker fell in a shared heat 15. King top scored for the away side with 13+1.

Captain King got the away side off to a decent start winning heat one as the points were shared. Jan Graversen won heat two but Nathan Greaves and Connor Mountain were both amongst the points for a 3-3. The home side edged ahead in heat three as Lasse Bjerre won ahead of Cameron Heeps and Josh Bates picked up third for a 4-2. Witches guest Ben Barker was in fine form in heat four as he first passed Georgie Wood on the fourth bend of the opening lap for second before he dived under Scott Nicholls on the first turn of the third lap to take the win in a 3-3 that left the home side 13-11 up.

Bjerre won heat five ahead of King but it was a terrific battle for third as Bates and Greaves traded moves throughout with the home man snatching third for a 4-2 to the Tigers. Barker was giving it his all for the away side and he took his second heat win in heat six as the points were shared. The Witches looked like going level in heat seven as Kyle Newman and Heeps gated on a 5-1 but Newman then took a heavy fall on the third turn as Bjerre made his move to hit the front and Newman was excluded from the re-run. The Witches man walked away but was seen to by the paramedics back in the pits. Heeps produced a fantastic ride in the re-run to win and prevent a home heat advantage. Sheffield extended their lead in heat eight though as Graversen and Todd Kurtz both passed Mountain to hit a 5-1 to make it 28-20.

Barker looked like making it three wins from three in heat nine but Bjerre went under the Witches guest going into the third turn to lead on the opening lap as Bates picked up third for a 4-2 to give the home side a 10 point lead. Newman was withdrawn from the meeting following his heat seven fall, leaving the Witches with a tough task for the remainder of the meeting. Nicholls won heat 10 as Greaves and Heeps kept Kurtz at the back for a 3-3. King won heat 11 as he blasted round Kurtz going into the first and second turn of the second lap as the points were shared again and the Witches battled to stay in the tie. Bjerre won heat 12 ahead of Heeps as Wood passed Greaves on the final lap to take third for a Tigers 4-2 to give them a 42-30 lead.

Ipswich then recorded their first heat advantage of the night at the perfect time in heat 13. Barker swooped round the pack on the opening corner to hit the front and was followed home by King for the 5-1. However, the home side repaid the compliment in heat 14 as Bates and Graversen hit a maximum in the re-run after the first attempt at the heat had been called back for an unsatisfactory start. Heat 15 was stopped after Barker fell on the second lap whilst in third and was treated by the paramedics. The race was awarded with King leading at the time of the stoppage, leaving the final score 51-39 to the home side going into Friday’s second leg.

Kids go free to the second leg at Foxhall on Friday 13th October.