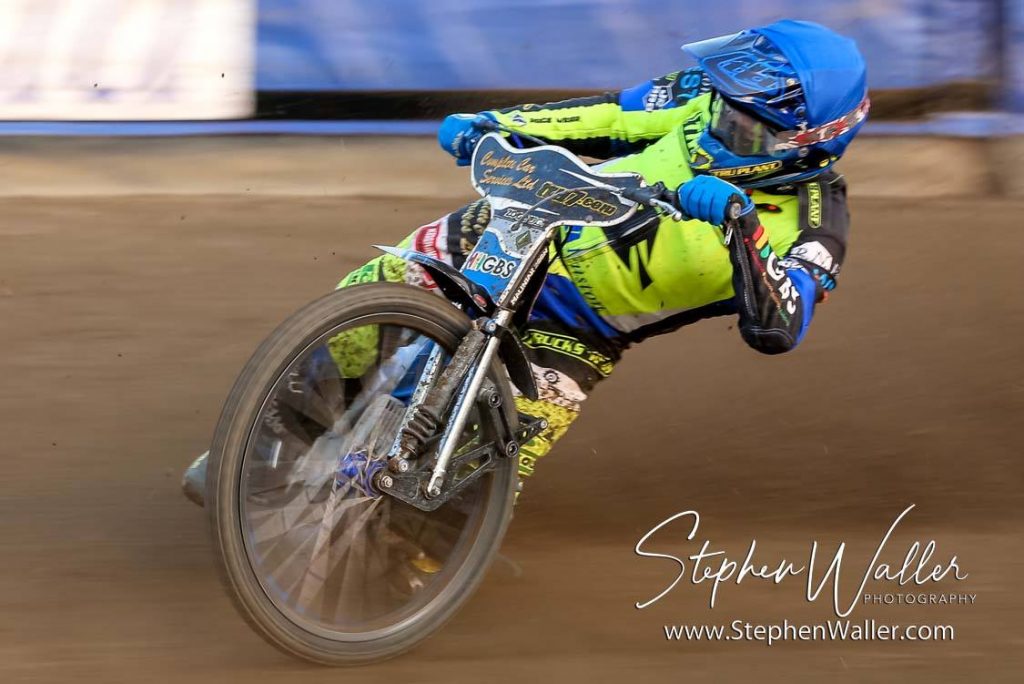 The ‘Tru Plant’ Witches suffered a frustrating 50-40 defeat at Workington on Saturday night in the Championship.

With both teams going for the play-offs it was a crucial clash for the pair and the Witches looked set for at least a point having not been more than four points behind until heat 13. However, the hosts hit a 5-1 in heat 13 leaving the away side with no time to recover and they secured the win, sending the Witches home pointless. Cameron Heeps top scored for the Suffolk side with

Comets captain Ty Proctor won heat one ahead of Heeps with Nicolai Klindt third for a 4-2 to the home side. Coty Garcia produced an impressive display to win heat two with Rene Bach second and there was a good battle at the back between Kyle Bickley and Witches debutant Drew Kemp as the home rider came out on top to ensure a shared heat. Heat three was called back with Mason Campton warned for moving at the start. Mark Riss provided another heat win for the Witches in re-run but with Nico Covatti at the back it was a 3-3. Heat four was also called back with Proctor given a warning this time for movement at the start. Witches guest Steve Worrall won the re-staging in another shared heat to leave the home side 13-11 up.

The visitors levelled the score in heat five after Heeps won and Rory Schlein picked up a point for a 4-2. Heat six was stopped as Worrall fell whilst in second and he was excluded from the re-run. The Comets punished the away side in the re-run as Klindt and Campton raced to a 5-1 to put them back in front. The Witches hit back in heat seven as Covatti won with Riss third for a 4-2 to reduce Workington’s lead to two. Bach won heat eight but with Garcia and Heeps both in the points it was a 3-3 to leave things finely poised at 25-23 to the home side.

Worrall won heat nine for the Witches but the points were shared with Kemp at the back. Covatti then went through the tapes in heat 10 and was replaced by Garcia in the re-run. Bach won the re-run ahead of Riss as Klindt picked up a point to double the home side’s lead. Proctor took the chequered flag in heat 11 as Schlein and Heeps filled the minor placings for a 3-3 to keep the scores close. Bach’s good night continued with another win in heat 12 but with Garcia and Covatti in second and third it was a shared heat again leaving the score 38-34 with three to race.

Heat 13 was a disaster for the Witches as the home side were awarded a 5-1 after Schlein fell on the third lap with the hosts already on a 5-1 at the time. That put the Comets eight points up with two to race. Heeps was sent out in heat 14 as a tactical substitution as Bach came in for Bickley for the Comets. Heeps won but partner Riss couldn’t get amongst the points meaning the win was sealed for Workington and the Witches needed a heat advantage in heat 15 to take a point. However, it wasn’t to be for the away side as Klindt was awarded the win ahead of Heeps after Riss was a faller on the final lap whilst at the back. That 4-2 gave the home side a 50-40 win and meant the visitors went away empty handed.

Heeps has not found his consistent best form on the road in 2018 but at Derwent Park he was the top performer for the away side, scoring 12+2 including two race wins.

With the hosts unable to go more than four points ahead all night, it looked like the away side would claim at least a point from the meeting. However, in heat 13 the home side were awarded a 5-1 as Schlein fell, leaving too much to do for Ipswich to gain a point in the last two heats.

The Witches are next in action at Foxhall against Peterborough on Thursday 23rd August in a Championship clash. Kids go free to this meeting.