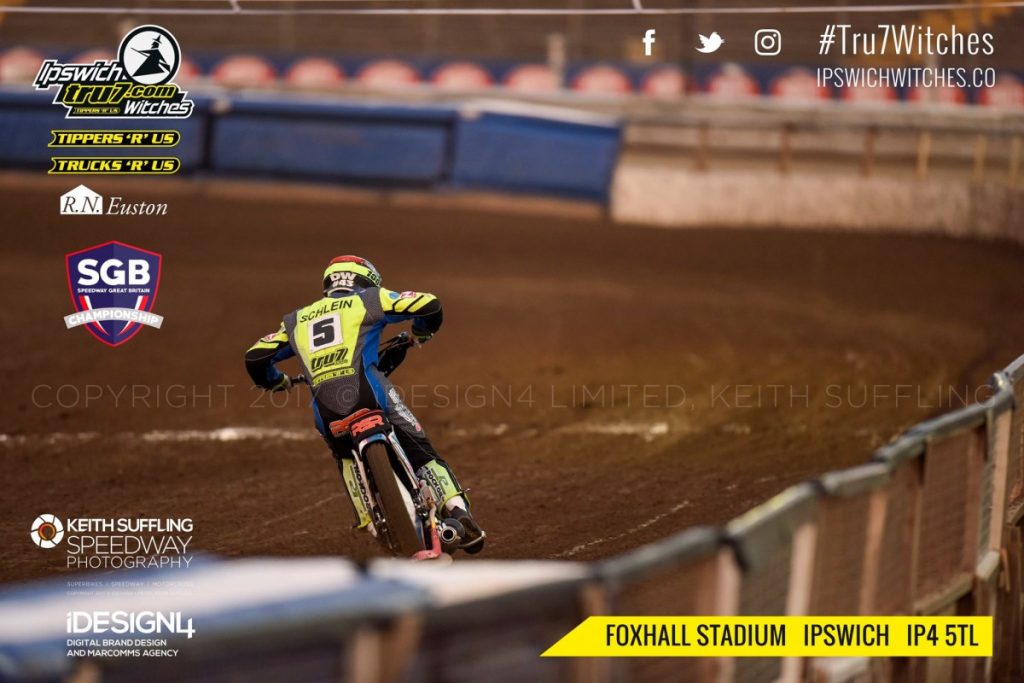 The ‘Tru7.com’ endured a tough night at Workington on Saturday as they went down 54-38 to the home side in the Championship.

The home side started strongly and the Witches were never able to get a foothold in the tie despite reducing the deficit to eight at one point in the meeting, the Comets ran out convincing winners. Skipper Danny King top scored with 12+1.

Heat one was an entertaining one albeit in tricky conditions as Craig Cook, Mason Campton and Danny King traded places throughout with Cook the eventual winner as King split the home pair. Track work was requested ahead of heat two by the riders. There was an unsatisfactory start in heat two as a home rider jumped the start but in the re-run it was a maximum to the Comets as Matt Williamson and Robert Shuttleworth picked up the points after Nathan Greaves took a heavy fall early in the race but cleared the track. James Sarjeant broke the tapes in heat three and was replaced by Williamson in the re-run. Justin Sedgmen made the gate in the re-run but was passed by the rest of the field on the second lap after going wide which resulted in another 5-1 to the Comets. There was to be another re-run in heat four after Shuttleworth collided with Greaves on the fourth turn of the first lap which resulted in a nasty fall for both riders. Both riders were examined by doctors before Shuttleworth withdrew from the meeting after being excluded from heat four. Thomas Jorgensen kept Rory Schlein at bay in re-run meaning a commanding early lead of 17-7 to the home side.

Team Manager Ritchie Hawkins wasted no time in giving King the black and white helmet in heat five and he made the gate but there was yet another restart after Sarjeant jumped the start and was warned by the referee. Ty Proctor won the second attempt as King and Sarjeant battled it out for second with the Witches man making it stick on the final lap for a 4-4. Schlein got the first heat win of the night for the visitors ahead of Cook in a shared heat. Jorgensen won heat seven but Sedgmen and Newman ensured there was to be no heat advantage to the home side. There was another 3-3 in heat eight as Campton won ahead of Heeps and Greaves, meaning the Witches had work to do being 30-20 down.

Sarjeant received his second warning of the night for movement at the start in heat nine but was allowed to take his place in the re-run and made the gate with Proctor joining him before the latter broke a chain later on the first lap allowing Schlein to take the win with Connor Mountain third for a Witches 4-2 to reduce the gap to eight points. Any hope was quickly diminished in heat 10 as Cook and Campton raced to a 5-1 to make the gap 12 points. King made the start in heat 11 but was adjudged to have jumped the gun as the referee called for a re-run. King made the gate again with Heeps third as the away side battled away to keep chances of a point alive. However, it was all but over after heat 12 as Proctor and Williamson hit a 5-1 to make it 44-30 with three races to go.

Schlein made the start in heat 13 but Cook passed the Witches man on the fourth turn of the opening lap and Jorgensen was a faller later in the race whilst in third meaning the race was awarded as a 3-3. Williamson won heat 14 in a shared heat before Cook rounded off the night with a win in heat 15 as Proctor got the better of Schlein for third to make the final score 54-38 to Workington.