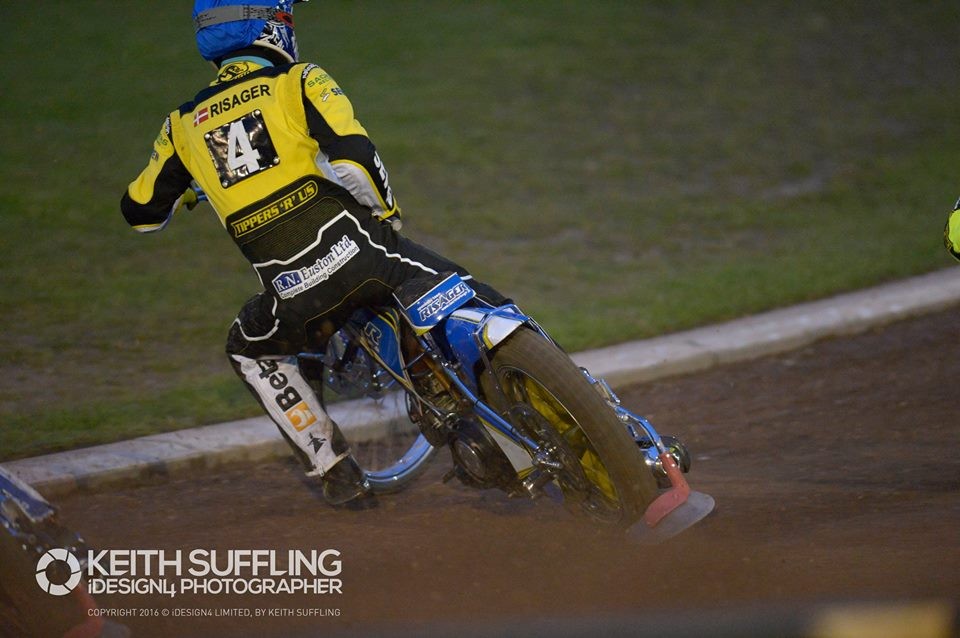 The home side led throughout but the Witches kept within striking distance during the course of the meeting before their chances of taking any points from the meeting ended in the final heat. Ben Barker was the top Witch once again scoring 9+1.

Things didn’t start well for the away side as Danny King made the gate but was passed by Sam Masters before the skipper then fell on the third bend and was excluded. The Monarchs pair were quick away from the tapes in the re-run and recorded a 5-1. The home pair of Max Clegg and Dan Bewley made the gate in heat two but Paco Castagna got past Bewley into second to prevent a consecutive maximum. The Witches got their first heat advantage in heat three as Morten Risager took the chequered flag with Nico Covatti in third. Heat four was a shared heat as Barker swooped round the first turn to take the win leaving the score 14-10 to the home side.

The Witches reduced the Monarchs advantage to just two points in heat five despite James Sarjeant going through the tapes and being excluded. Ollie Greenwood replaced him as the heat was won by King with Greenwood in third for a 4-2. However, the Monarchs hit back immediately with a 5-1 thanks to Masters and Erik Riss in heat six. Clegg made the gate in heat seven before Covatti hunted the Monarchs man down and cut back to pass him for the lead on the second lap. Clegg then fell on the third lap and the referee decided the race needed to be re-run. Ryan Fisher won the re-run to ensure the Witches could not capitalise. Heat eight was a disaster for the Witches. Erik Riss led from the gate as Sarjeant blasted into second but at the back Greenwood and Bewley clashed going into the third turn on the first lap; an incident for which Greenwood was excluded. In the re-run Sarjeant fell on the second bend after pressure from Bewley and was excluded meaning the Monarchs coasted to a 5-0 that left the Witches 29-18 down.

Ritchie Hawkins reacted immediately sending Barker on a tactical ride but the Witches man could only claim second as Kevin Wolbert won with his partner Mark Riss in third to prevent the Witches gaining any advantage from the tactical ride. The Monarchs gated on a 5-1 in heat ten but Covatti passed Erik Riss round the outside and Risager flew up the inside to ensure a share of the spoils. The Witches still harboured hopes of claiming something from the meeting after heat 11 as King got past Fisher to take the win with Sarjeant in third for a 4-2. Heat 12 was a 3-3 as Wolbert won again, leaving the Witches 41-32 down with three to race.

The home side won the meeting in heat 13 after a couple of re-runs due to movement at the start and first bend bunching but Masters won at the third attempt as King and Barker got past Fisher to keep the Witches in the hunt for a point. Clegg won heat 14 in a shared heat which meant the Witches needed a  5-1 in the last heat to claim a point.

The first attempt of heat 15 was stopped after King and Wolbert fell going into the first turn with all four back the verdict. However, Masters and Wolbert made the gate and eased to a 5-1 leaving the final score 52-39 to the home side.

Team Manager Ritchie Hawkins couldn’t not fault the effort of his side but said mistakes cost them badly.

“We battled hard; everyone of us and you couldn’t fault their effort but too many mistakes cost us the opportunity to take points out of the meeting.”

Next meeting: PL 18th June vs Berwick (away)