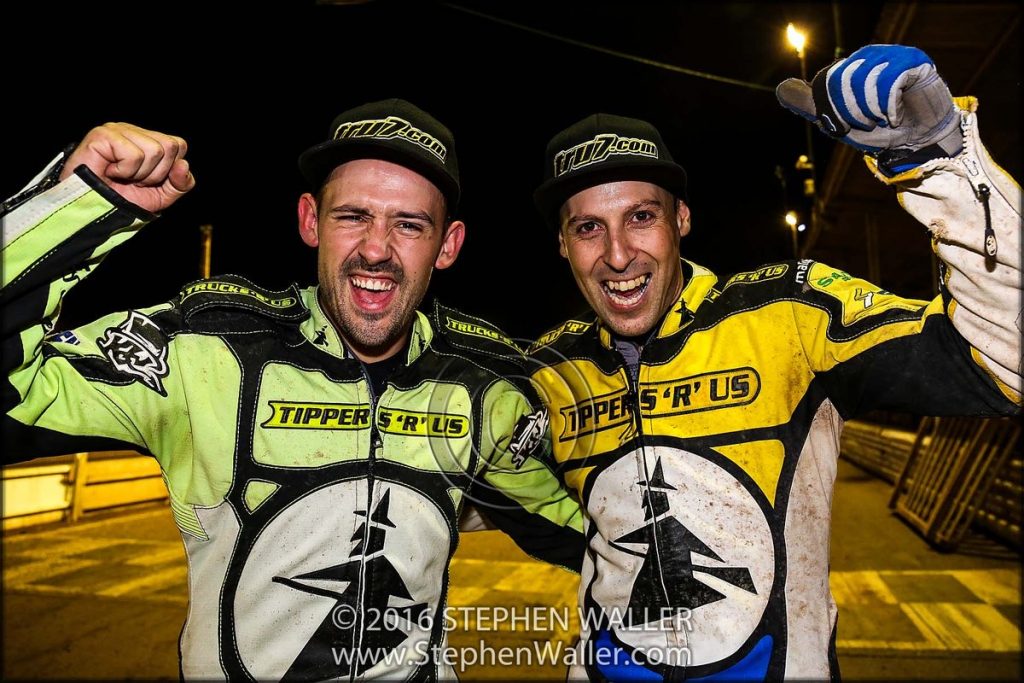 The ‘Tru7.com’ Witches took control of their Play-Off Quarter-Final against Edinburgh with a stunning 58-32 win in the first leg at Foxhall on Thursday.

The Witches were fired up and put in a scintillating performance, roared on by a big crowd on the terraces to rack up a 26 point lead to take to Edinburgh next Friday. Danny King was once again in fine form scoring a paid maximum (13+2) from five rides.

The skipper got his customary win in a heat one 3-3 as he came within a whisker of the track record winning in 56.1 seconds, the fastest time of the season and the smallest of margins away from Craig Cook’s 56.0 last season. Joe Jacobs was quickest out of the gate in heat two and he was joined by Connor Coles in second but the Witches guest came to grief on the third lap and fell on the third bend meaning a shared heat. Erik Riss was the early leader in heat three but he couldn’t hold off the Witches duo of Morten Risager and Nico Covatti who picked him off one by one on the second lap to record the first 5-1 of the night to the Witches. Ben Barker won heat four but it was the ride from Coles that got the crowd on their feet as he held off Kevin Wolbert for four laps to claim second and another 5-1 that gave the Witches a 16-8 lead.

The home side were in determined mood and Covatti and Risager hit the front in heat five and held off the challenge from Sam Masters for a third maximum in a row. The Witches smelt blood and were ruthless in heat six as James Sarjeant and King stormed to a comfortable 5-1 with the Monarchs on the ropes at this stage. It looked like more punishment was coming for the champions in heat seven as Barker and Jacobs led early on but Jacobs locked up on the second bend of the second lap and was passed by both Monarchs to stem the tide. Ryan Fisher was a faller on the first turn in heat eight but he reluctantly cleared the track with the Witches duo of Sarjeant and Coles out front and looking good for a 5-1. Sadly for the Witches Coles fell on the final turn allowing Ben Hopwood into second but the guest got up and picked up a point for another heat advantage to the Witches. Fisher took his complaints up with the referee after the heat with the Witches dominating proceedings and 33-15 up.

Wolbert got the away side’s first heat win of the night in heat nine in a shared heat but the Witches extended their lead in heat 10 as King and Sarjeant eased to another 5-1 from the gate. Masters won heat 11 ahead of Barker with Fisher in third for the first heat advantage of the night for the visitors. Covatti was a clear winner in heat 12 as Coles got into trouble whilst in third on the third bend of the first lap meaning the Witches settled for a 3-3 to make the score 46-26 to the home side.

King rode a fantastic first lap in heat 13 winding it on around the outside of bends three and four to hold the lead under severe pressure from Masters but after that the British champion was comfortable out front with Barker third for a 4-2 to the Witches. Mark Riss put in an impressive display in heat 14 to win and it looked like being a 4-2 to the away side until Max Clegg fell on the final lap whilst in third which resulted in a shared heat.

It was a case of saving the best for last in heat 15 as Masters led down the back straight of the first lap only for Covatti to dive up the inside going into turn three pushing Masters wide and thus allowing King up the inside to join him at the front for a 5-1 to finish the night and give the Witches a 58-32 win.

Team Manager Ritchie Hawkins was delighted with the determination his side showed but knows the job is only half done as he says the team will approach the trip to Edinburgh like any other; to win.

“I was really pleased with their commitment and determination to win tonight,” said Hawkins. “The boys are starting to believe how good they are now and we’ve come into form at the right time of the season. It was a really good performance.

“We’ve got to go to Edinburgh looking to win. Edinburgh have beaten many a side over the years by more than 26 points. They are the two-time reigning champions but tonight we looked like a side that believed they can win and we were the most determined team to win and we need to carry that on next week.”

Hawkins says that guest Coles exceeded expectations and lifted the rest of the team.

“I thought Connor did exceptionally well and he exceeded all of our expectations really. We’ve got a grippy, tricky track to ride at the moment and it takes a bit of time to get used to. To come in and ride that well on your first time, it rubs off on the rest of the team as well. When the rest of the team see a young boy riding like that it boosts everyone. He was brilliant.”

The boss was pleased to see another big crowd and Foxhall and says the fans played their part in the victory.

“We’re getting some big crowds and the atmosphere has improved and it’s the same in the pits as it is outside of the pits. It’s pleasing to see and if the fans can see all of the boys putting in 100% effort then it’s a boost to them and it works both ways, everyone bounces off of each other.”

Tippers ‘R’ Us Rider of the Night: Nico Covatti

Next Meeting: PLPO 30th September vs Edinburgh (away)