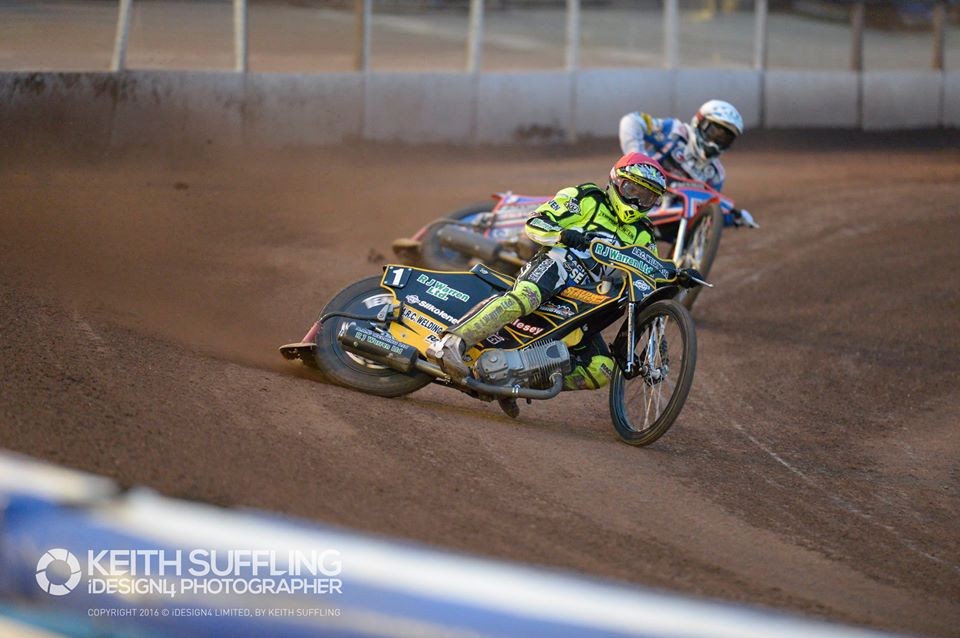 The ‘Tru7.com’ Witches came out on top of a last heat decider to beat the Rye House Rockets 48-45 at Foxhall on Thursday.

The Witches were in control for the majority of the meeting before a late tactical ride got the Rockets back into the tie but the Witches closed the meeting out thanks to a 15 point maximum from Danny King.

The Witches got off to the perfect start as King and James Sarjeant raced to a 5-1 in the opening heat, the first Witches riders to beat visiting captain Eddie Kennett this season after he had recorded three consecutive maximums against the Witches. It was level pegging after heat two though as Robert Branford won for the Rockets with Ben Morley fending off Joe Jacobs in second.  Morten Risager rode brilliantly to hunt down Cameron Heeps and pass him on the line for the win as Nico Covatti worked hard to pass Leigh Lanham on the second lap for third. Ben Barker was dominant in heat four as Stuart Robson passed Danyon Hume to take second with the Witches man collecting his first point at Foxhall. This gave the Witches a 14-10 lead early in the meeting.

Covatti was the next man to beat Kennett in heat five with the Rockets man battling past Risager into third in the first shared heat of the night. King and Sarjeant were at it again in heat six as they banged in their second maximum of the night to extend the Witches’ lead.  Barker continued his unbeaten start in heat seven as Jacobs got out of shape on the back straight of the first lap before falling on the third bend. Sarjeant went through the tapes in heat eight and went from 15 metres as Kasper Lykke won the re-run with Jacobs working hard to pinch second on the line ahead of Ben Morley as the Rockets recorded a 4-2 to leave the Witches 27-21 up.

Robson won heat nine in a shared heat before there was a faller in heat 10. Heeps and Sarjeant were battling for position on the second bend of the second lap and the Australian fell and was excluded from the re-run. King and Sarjeant made it three from three in the re-run as they hit another 5-1 on the night. The Rockets sent out Kennett on a tactical ride in heat 11 but there was another faller as Jacobs fell heavily on the third turn of the first lap and was excluded. Kennett won the re-run ahead of Barker for a 7-2 that brought the Rockets back into the meeting.  There was just a point in it after heat 12 too as the Rockets hit a 5-1 thanks to Branford and Heeps leaving it all to race for with the Witches 38-37 up.

The Witches gave themselves a little breathing room as King recorded his fourth straight win in heat 13 with Barker in third after being passed by Robson as Kennett fell whilst at the back. Risager won heat 14 in a 3-3 that took it to a last heat decider. King won heat 15 to complete his maximum in another shared heat that gave the Witches a 48-45 win over the Rockets.

Team Manager Ritchie Hawkins admitted his side made hard work of the win and says it could be down to a lack of regular meetings at Foxhall.

“We made it real close again and we dropped away a bit,” said Hawkins. Obviously the double points worked well for them but we made it hard for ourselves. However, we got the win and we’d prefer to win by a bigger margin but it is what it is.

“I think this year we are not dominant at home for a number of factors. We’ve got a lot of new riders and we’ve not had regular fixtures at home, so they haven’t had chance to get that home track advantage.”

Hawkins was delighted with King’s performance ahead of the British Grand Prix on Saturday and was full of praise for Hume.

“Danny has gone into this weekend in the best way possible with his maximum. It will be very tough on Saturday but hopefully we can go there and mix it up a bit.

“Danyon did really well for an inexperienced rider, for his one point that was one of the best I’ve seen! His effort was brilliant, he was great and it was so pleasing to see someone giving it everything.

“I think it’s fair to say making his debut at Ipswich meant a lot to Joe and it got to him a little and I think he was a bit overawed by it. Hopefully now with a run of fixtures and the first one out of the way he can push on from here.”