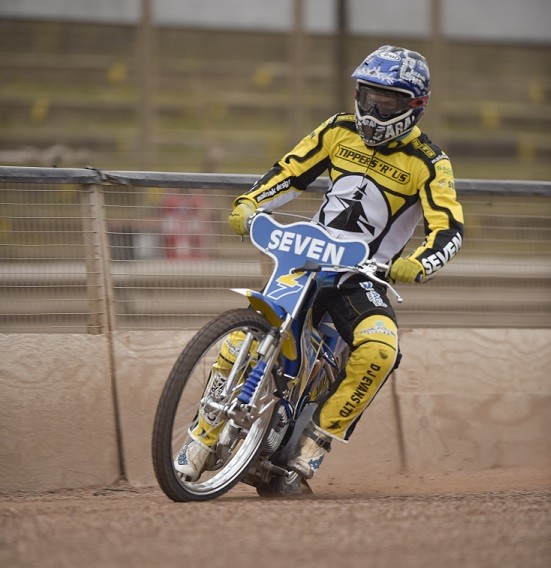 It was a night to forget for the ‘Tru7.com’ Witches as they were comfortably beaten 61-31 by the Somerset Rebels at the Oak Tree Arena on Friday evening.

Things started well briefly for the Witches but after the loss of Danny King to injury the home side were dominant throughout and ran out comfortable winners. Morten Risager topped the scoring charts for the Witches with 8.

Captain King kicked off heat one with his usual win holding off Josh Grajczonek for four laps with James Sarjeant in third to give the away side an early advantage. Paco Castagna flew from the gate in heat two to take the chequered flag and maintain the Witches’ lead. The scores were level after heat three when Charles Wright took the win ahead of Morten Risager with Paul Starke finding a way past Lewis Kerr on the final bend for a 4-2 to the Rebels. The home side took then the lead after Rohan Tungate and Zach Wajtknecht combined to keep Nico Covatti behind them for a 5-1, making it 14-10 to the Rebels after four heats.

Heat five was where it all started to go wrong for the Witches. Wright and King went down the back straight on lap one with the faster King winding it on round the outside but Wright left no racing room and took the captain’s front wheel and left King crashing into the fence and in a heap on the track. Medics attended to King on the track whilst the referee somehow came to the decision to exclude the captain, a decision that not many in the stadium could believe which left an angry Witches management staff in the pits. Thankfully King was able to return to the pits but would take no further part in the meeting with limited movement in his arm after taking a heavy blow on the shoulder. Wright and Starke combined for a 5-1 in the re-run. Rebels captain Grajczonek won heat six ahead of Covatti with partner Jake Allen in third for a 4-2 which left the Witches ten behind. Team Manager Ritchie Hawkins reacted instantly putting Risager on a tactical ride but the Dane could not beat Tungate although the Witches recorded a 5-3 with Kerr in third. Sarjeant won heat eight from the tapes in a 3-3 which left the score 29-21 to the Rebels.

Starke won heat nine ahead of Castagna with Wright getting past Covatti at the back for another heat advantage to the home team.  Things got worse in the following heat when Allen and Grajczonek recorded a 5-1 and it was more of the same in heat 11 when Tungate and Bradley Wilson-Dean combined for another. It was a share of the spoils in heat 12 as Wright won again ahead of Kerr and Castagna but the result was now beyond the Witches, trailing 46-28 with just three heats to go.

The Rebels did not let up there though and made matters worse for the Witches with another 5-1 from Tungate and Grajczonek in heat 13. Risager led heat 14 but was pushed wide on the third bend on lap one by Wilson-Dean which allowed the home pair to combine for another maximum. Grajczonek and Starke compounded the Witches’ misery in the final heat with another 5-1 to make the final score 61-31.

A frustrated Ritchie Hawkins admitted his disappointment with the start to the Premier League campaign and believes the team must find their consistency quickly.

“I’m massively disappointed,” said Hawkins.  “We started well tonight but what happened to Danny knocked the whole stuffing out the team really. Nobody is living up to expectations, certainly not consistently, they are all showing at different stages they can do it. Paco has stepped up his performances which we have needed in the last couple of meetings but unfortunately others have had bad meetings.”

Hawkins was impressed by the Rebels but believes his own side are capable of much better and placed a high importance on the upcoming Knockout Cup tie against Rye House.

“They (Somerset) are on a crest of a wave and have started the season really well but we haven’t performed well enough at all, individually and collectively. We’ve got a break now and when we come back it’s Knockout Cup and it’s vital for the boys to win because we’re already out of one competition and we’re bottom of the league so we need to get ourselves going. The boys need to have a think really; see where they are going and focus. They are all very capable and are showing it in glimpses but it’s about getting consistency.”

The boss believes Danny King will be fit for Knockout Cup tie with Rye House after his nasty crash on the night.

“I think Danny will be alright, we will see how he is over the weekend and if he rides on Monday for Coventry but for us we’ve got a break now and I’m sure he will be fine by our next fixture against Rye House.”

Next Meeting: KOC 12th May vs Rye House (home)