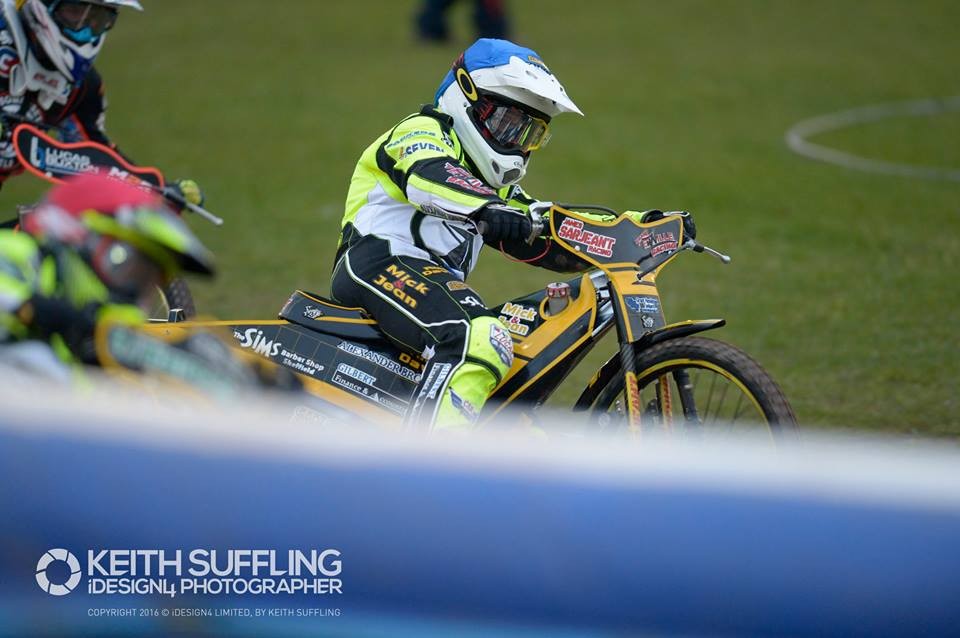 The ‘Tru7.com’ Witches made it three wins on the trot at Foxhall as they hammered the Peterborough Panthers 57-36 on Thursday.

The opening four heats were tight but after that the Witches stepped it up a gear and ran away with the meeting with Danny King recording a 15-point maximum, his third consecutive maximum at Foxhall.

The Witches got the ball rolling with a 5-1 thanks to King and James Sarjeant after visiting guest Lasse Bjerre fell on the fourth turn of the second lap whilst in second and managed to get up and clear the track. The Panthers were quick to hit back with their own heat advantage in heat two as Ashley Morris passed home guest Danny Ayres on the final bend in an entertaining heat to take the win with Zdenek Holub in third for a 4-2. Nikolaj Busk Jakobsen won heat three ahead of Morten Risager as Tom Perry did everything to hold off Nico Covatti for third but the Italian found a way past on the final bend to prevent a Panthers advantage. Ben Barker won heat four as he rounded the Panthers pair on the fourth bend of the first lap for a shared heat giving the Witches a narrow 13-11 lead in the tie.

The Witches extended their lead in heat five though as Risager and Covatti coasted to a maximum. The Witches were getting into their groove now and banged in another 5-1 in heat six thanks to King and Sarjeant once again, who attacked early leader Ulrich Ostergaard on either side coming out of the second turn to hit the front. Busk Jakobsen was sent out on a tactical ride in heat seven which he duly won with the Witches pair second and third to limit the damage to a 6-3. Holub was a faller on turn two in heat eight and was excluded from the re-run. The Witches took full advantage as Ayres and Sarjeant eased to a maximum to give the home side a commanding 31-20 lead.

There was a nasty spill in heat nine as Ostergaard lifted coming out of bend two and wiped out Covatti and was duly excluded as both riders were able to get up and walk away. Risager and Covatti made no mistake in the re-run as the Dane won, passing Morris at the front on the back straight of the second lap with the Italian then passing Morris on the final lap to join his partner for a 5-1. It was one way traffic as King and Sarjeant put another 5-1 on the scoreboard in heat 10, with the latter completing a paid maximum from his four programmed rides. The meeting was sealed in heat 11 as Barker won with Ayres passing Morris to get third at the start of the second lap for a Witches 4-2 that made it 45-24 to the home side.

The Panthers pulled two points back in heat 12 as the impressive Busk Jakobsen won again with partner Morris in third. King then won again in heat 13 as the heat was shared with Barker trying his socks off to get into the points at the back but to no avail. Ayres completed his fantastic evening guesting for the Witches as he won heat 14 under pressure from Morris in second who was nearly passed by Risager on the line resulting in a 4-2 to the Witches. Ayres took the applause from the Foxhall faithful in fine style.

King won heat 15 to complete his third consecutive maximum in a shared heat that meant the Witches took a 57-36 win over the Panthers as their rise up the table continues.

Team Manager Ritchie Hawkins was delighted to see his side pull away from the Panthers after a tight opening to the meeting.

“It was a great night for us,” said Hawkins. “It was tight for the first four heats and they could have been ahead if not for a few mistakes but then we turned it on and after they used the black and white we just turned it on again and pulled away.

“The last couple of weeks we’ve kicked on and not let the lead slip and that’s a positive but we can’t do it for just two weeks, we’ve got to do it for the rest of the year. I think we’ve needed time and it’s taken maybe longer than hoped but it’s obviously a positive our form at the moment.”

Hawkins says the side is building some momentum but adds that wins away from home are needed later in the season.

“We’re getting used to winning and that’s three in a row now, four out of the last five and we should be getting into the winning habit going into a big weekend at the Fours. Hopefully we have a good weekend there and we need to carry on with another win next week and then we need to pick up some away wins.”

The boss was full of praise for skipper King and Sarjeant whilst he also was delighted with the impact guest Ayres had in the pits.

“No one has got near Danny (King) in the last three meetings, he’s looked like a GP rider against Premier League riders. Sarge (James Sarjeant) was tremendous, to come back from last week and get a maximum showed great strength of character. Danny Ayres, what a guest he was! He is a right character and everyone loved having him around, the fans loved him and he was a good addition to the pits this week.”