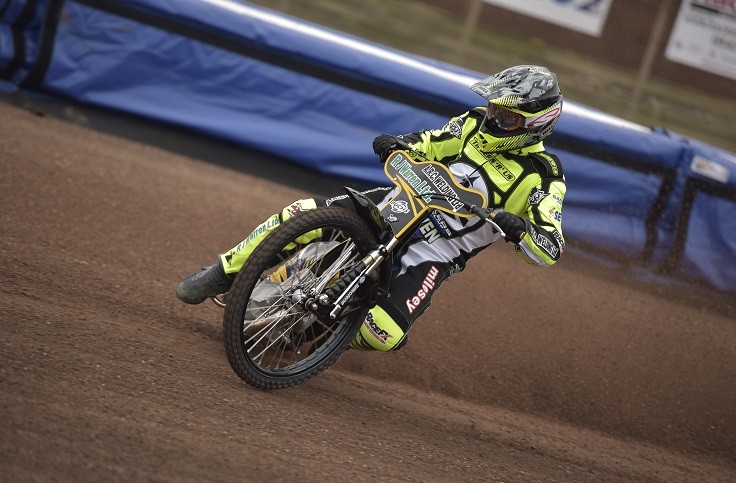 The Ipswich ‘Tru7.com’ Witches recorded their first win of the new campaign after beating the Peterborough Panthers 48-42 at Foxhall in the League Cup.

The Witches held a slight advantage from heat three onwards and ran out deserved winners on a night of good racing with the visitors claiming a point from the meeting. Danny King top scored for the home side with 14.

It was captain King who got the side off to the perfect start winning heat one with James Sarjeant in third to kick off the evening with a heat advantage. The Panthers struck back in heat two with a maximum but it would be the only time they led throughout proceedings. The Witches recorded their own maximum in heat three as Lewis Kerr and Morten Risager flew from the gate to regain the lead. Heat four was shared as Nico Covatti led from the tapes to make it 13-11 to the home side.

Ulrich Ostergaard split the pair of Kerr and Risager in heat five but Kerr romped home to win the heat for another heat advantage to the Witches. The home side kept increasing the lead in heat six as King and Sarjeant recorded another 4-2. The Panthers stemmed the tide in heat seven as Nikolaj Busk Jakobsen won but Covatti split the Panthers pair cutting up the inside of Michael Palm Toft on the final bend to snatch second despite losing his steel shoe during the race. Sarjeant was in fine form in heat eight as he hunted down Simon Lambert to cut up the inside on lap three and take the win in a shared heat to leave the score finely poised at 26-22 to the Witches.

Nicklas Porsing won heat nine to end Kerr’s chances of a maximum in a shared heat before King and Sarjeant combined in heat 10 for another 4-2 after King had rounded Jakobsen on lap two for the win. The Panthers wouldn’t go away though and clawed back two points in heat 11 as Ostergaard fended off Covatti who had blasted round Lambert to give chase to the Dane but couldn’t quite get round him for the win. Kerr was back to winning ways in heat 12 in a shared heat making it 38-34 to the Witches with three to go.

King was in fine form again in heat 13 as he stormed to another victory with Covatti once again chasing Ostergaard all the way in third but couldn’t find a way round to join King for a maximum.  The result was sealed in heat 14 though as Risager won from the gate and it looked to be heading to a 5-1 with Paco Castagna in second but Michael Palm Toft snatched second on the line for the Panthers to make it 46-38 with a heat to go.

The Panthers gated on a 5-1 in the final heat but King rounded Jakobsen on lap two and chased Ostergaard all the way to the line but could not find a way past meaning the Panthers recorded a 4-2 and claimed a point from the meeting, with the final score being 48-42 to the Witches.

Team Manager Ritchie Hawkins was delighted with the first win of the season and the improvements by the team after a disappointing start to the campaign.

“Everything went according to plan really,” Hawkins said. “It was a big improvement which is what we needed. It was far from perfect but it was a great improvement and I’m happy for the boys to get that one out of the way and it was another good stepping stone.

“I didn’t have to say a lot to them really before the meeting as they were all determined to put it right after a bad performance last time out. The boys are getting there and improving steadily. We are going to have to keep that up but that’s the stage we are at in the season, in a sense it’s going to plan.”

Hawkins was full of praise for Kerr who scored 11 on the night and believes he will only get better at Foxhall with more meetings.

“It was great to see Lewi (Kerr) back to his old self tonight, he was trapping and he was really quick and I think once he has had a string of meetings around here he is going to be really good. His confidence will have improved then too. He’s had a few meetings in the Elite League but he’s not had time to settle in here but I’m pleased to see him going well. Danny did the job we expect of him and I’m really pleased.”

The win means the Witches are still in the hunt to progress from the group and the boss is aware of the task ahead but believes it is possible.

“The situation before tonight was that we needed to win our next three matches and see where we stand going to Peterborough and it’s still the same. We’re one down now and we’ve got to win at Sheffield if we want to progress and that is our next goal.”

Next Meeting: 21st April vs Sheffield Tigers (away)