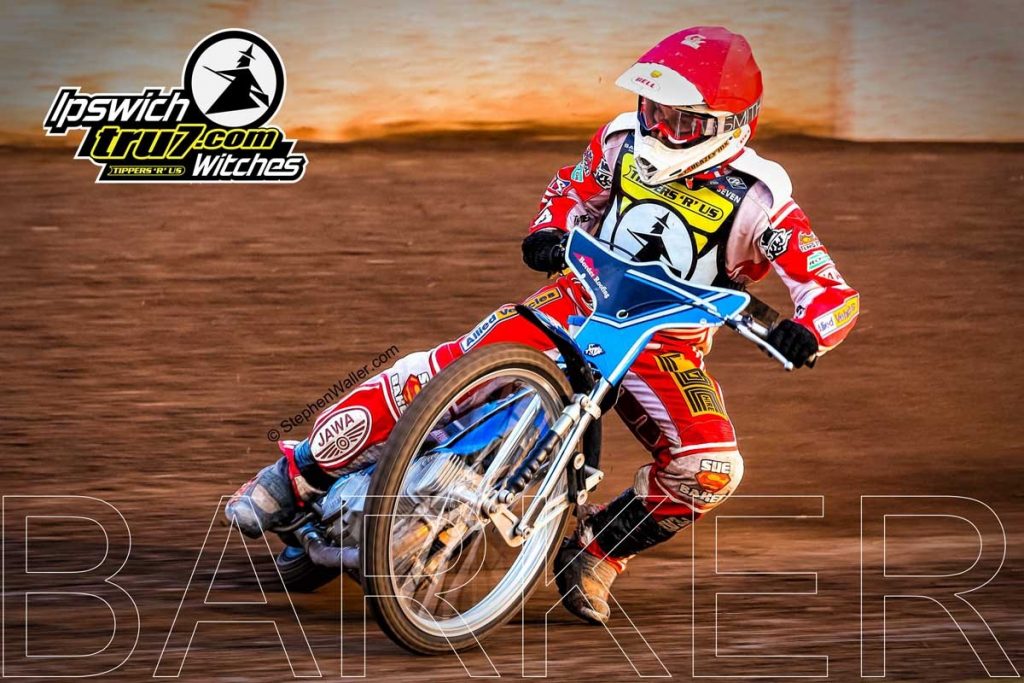 The ‘Tru7.com’ Witches came within a whisker of an away win as they lost out in a last heat decider at Workington with the hosts taking a 46-44 win on Saturday.

Heat advantages were hard to come by all night as the two sides went toe-to-toe for fifteen heats but a late 4-2 in heat 13 gave the home side the advantage and they clung on for the win with the Witches taking a point from the meeting. Ben Barker notched 12+1 for the Witches.

The skipper won heat one as the points were shared before the Comets went ahead in heat two with Matt Williamson taking the win and partner Adam Roynon in third. Kenneth Hansen won heat three with the Witches pair of Barker and Luke Priest in second and third. The Comets gated on a 5-1 in heat four but Morten Risager dived under Williamson on the third turn of the first lap to take second before leader Claus Vissing went wide coming out of the fourth turn allowing Risager to the front and the Witches man held on for the win that left the score 13-11 to the home side.

Hansen won heat five ahead of King and James Sarjeant for another shared heat. Heat six took three attempts after plenty of movement at the start but at the third attempt Ricky Wells won for the Comets with Campton third to extend the lead to four points. Workington looked like they may extend the lead further in heat seven but Barker passed Vissing going into the third turn on the first lap to take second and the Cornishman then took Roynon for the lead on the fourth turn of the second lap as the points were shared. Campton won heat eight with Witches duo Sarjeant and Jacobs in the points leaving the home side 26-22 up.

Risager was the early leader in heat nine but Hansen was in fine form and took the lead after swooping round the Witches rider on the third and fourth turns of the second lap in yet another 3-3. The 3-3’s kept on coming as Barker won heat 10 after a tight first two bends. The Witches got their first heat advantage of the night in heat 11 as King and Sarjeant gated but Vissing managed to get past Sarjeant to take second on the fourth turn of the final lap. It was all level after heat 12 though as Barker and Jacobs gated only for Hansen to swoop round the pair on the first two turns. Barker responded diving up the inside going into the third turn on the first lap and he comfortably won the heat with Jacobs third, meaning it was all square at 36-36.

Wells won heat 13 with Vissing third for a priceless heat advantage before Jacobs won heat 14 in a shared heat that took the meeting to a last heat decider.

Wells was quick out the gate again in heat 15 much to the anger of King who thought the American got away with one but it was to be a crucial win ahead of the Witches duo that ensured a narrow 46-44 win for the Comets, meaning the Witches took a valuable point on the night.

Team Manager Ritchie Hawkins was delighted with the performance and says the team are in good form.

“It was a great effort from the boys and a good performance from everyone,” said Hawkins. “We’ve carried on our form and I’m very happy with them. We came looking for a win as I feel we are in that sort of form but we’ve come a long way and we need to build on that tomorrow at Glasgow.”

Hawkins felt they coped well in the absence of Nico Covatti and said everyone stepped up to the plate.

“They (Workington)were missing a rider as well but Luke came in and rode well and so did everyone. They are all in good form and we look a good team. We managed ok without Nico but obviously we would have been stronger with him.”

The boss said there are frustrations over another possible ‘flyer’ for the opposition in heat 15 but is not dwelling on it.

“Ricky anticipated the start and the referee let it go and that is that. The frustrations are there from Sheffield in heat 15 too but I’m not worried about that and am looking to the future now.”

Next Meeting: PL 14th August vs Glasgow (away)