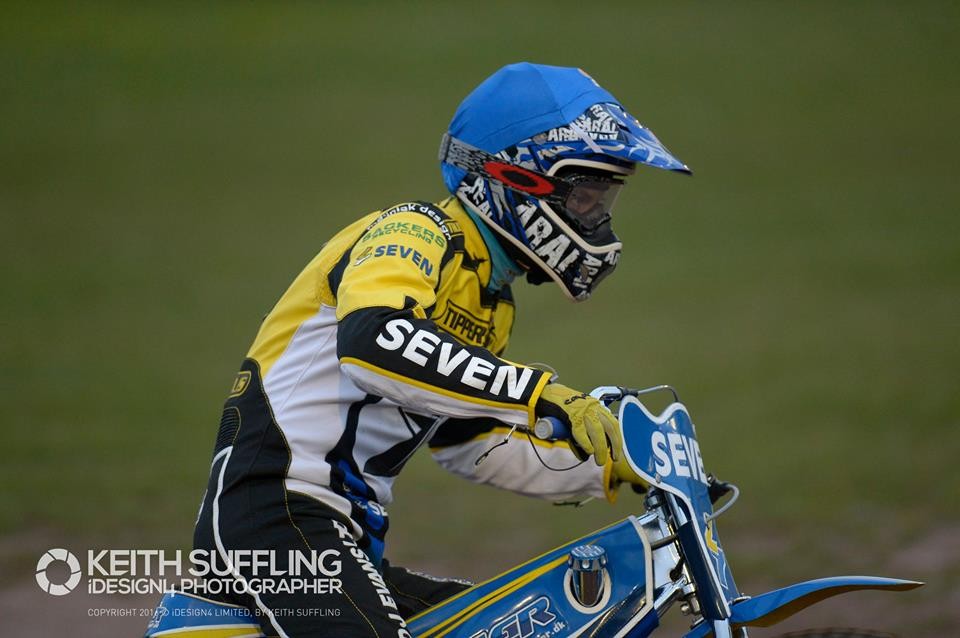 The ‘Tru7.com’ Witches continued their fine form at Foxhall with another thumping win against Scunthorpe on Thursday evening, running out 56-34 winners on the night.

After a tight opening four heats the Witches turned on the style and eased to a convincing win that puts them in the play-off spots for the moment. Danny King hit his fifth maximum on the trot whilst Morten Risager also recorded a paid maximum from four rides.

King started off in his usual form in heat number one and romped home with James Sarjeant in third for an early lead to the Witches. The Scorpions pegged back the difference in heat two with Carl Wilkinson taking the chequered flag with partner Josh Bailey in third.  Nico Covatti was a faller in heat three as he slid off on the first turn but Risager won the heat for a 3-3. There was plenty of drama in heat four as Josh Bailey fell on the first turn of the second lap after he clipped Danyon Hume’s back wheel and was excluded from the re-run. There was another fall in the re-run though with Ryan Douglas hitting the shale ahead of Hume who did well to lay the bike down but could not avoid the falling Douglas. Unfortunately for the Australian that was the end of the meeting for him and the Witches pair of Ben Barker and Hume coasted round for a 5-0 in the re-run to give the Witches a 14-9 lead.

Covatti and Risager hit the first conventional maximum in heat five as they eased to a 5-1 before King was winning again in heat six with Sarjeant in third again for a 4-2. Heat seven involved some terrific team riding from Barker and Joe Jacobs with the latter making the gate and Barker riding him home for four laps before taking the win on the line in a 5-1. The Scorpions sent out Michael Palm Toft on a tactical ride in heat eight but Sarjeant’s win meant the visitors only recorded a 5-3 that maintained the Witches’ healthy 31-18 lead.

Risager won heat nine with Covatti joining him at the front early on but bike problems meant that Covatti slipped back to third for just a 4-2. King won heat 10 ahead of Lewis Kerr who had passed Sarjeant down the back straight of the first lap for second. Hume fell in heat 11 but got up to clear the track, however, Palm Toft then took a heavy fall at the end of lap three and the race was awarded as a 3-2 to the Witches with Barker at the front. Kerr won heat 12 as Covatti and Wilkinson passed and re-passed each other before the Italian came out on top with Hume falling meaning a 4-2 to the Scorpions leaving the score 44-28 to the home side.

King had bike drama on the start line as he faced a race against the clock to get the second bike out. The skipper beat the clock but Barker packed up going into the first turn leaving Bailey nowhere to go and the Witches man was excluded. King completed his maximum in the re-run for a shared heat. Risager then completed his paid maximum in heat 14 with partner Jacobs in second for a 5-1.

Barker won heat 15 as Kerr passed Covatti for second on the third lap but it was another heat advantage to the Witches that made the final score 56-34 to the home side.

Witches Director of Speedway Chris Louis was pleased with the result and says the team are now comfortable with the Foxhall surface at last.

“It was a good performance,” said Louis. “It wasn’t an exciting meeting which is a shame but at the moment results are of paramount importance. It was a good all round team performance. Danyon had a few falls and struggled with conditions which were tricky tonight, it was a bit patchy in places. It was a solid performance that we have got used to at home now after we’ve had a run of home meetings throughout July . The lads have got used to the home track which took a while but they are there now and should we make the play-offs I think anyone would be rightly nervous about coming to Ipswich.”

“I’m fairly sure it would have happened before but someone would need to look at the history books to say when! There’s probably been several Witches that have done that or thereabouts but I’m not a historian. The club has had some great riders that I’m sure have put that run together but it is time to look at the history books and see how close he is to a record because he can’t be far off! He was in great form and got a bit lucky when his bike decided to stop before the green light came on so he got a bit of extra time to swap bikes. Morten put in a really solid performance too.”

The former captain says the loss of Ryan Douglas hit the Scorpions hard but the home side were deserving of the win.

“They were obviously weakened by the loss of Ryan Douglas but Danyon did well  to put his bike down but with the speed he was going at, his bike clattered into Ryan pretty hard. From a spectacle point of view that hit them hard but we were fully deserving of the win we got and we now move onto a very important weekend. ”

Attentions now turn to a vital weekend at Workington and Glasgow with Louis saying they can’t come back empty handed.

Next Meeting: PL 13th August vs Workington (away)