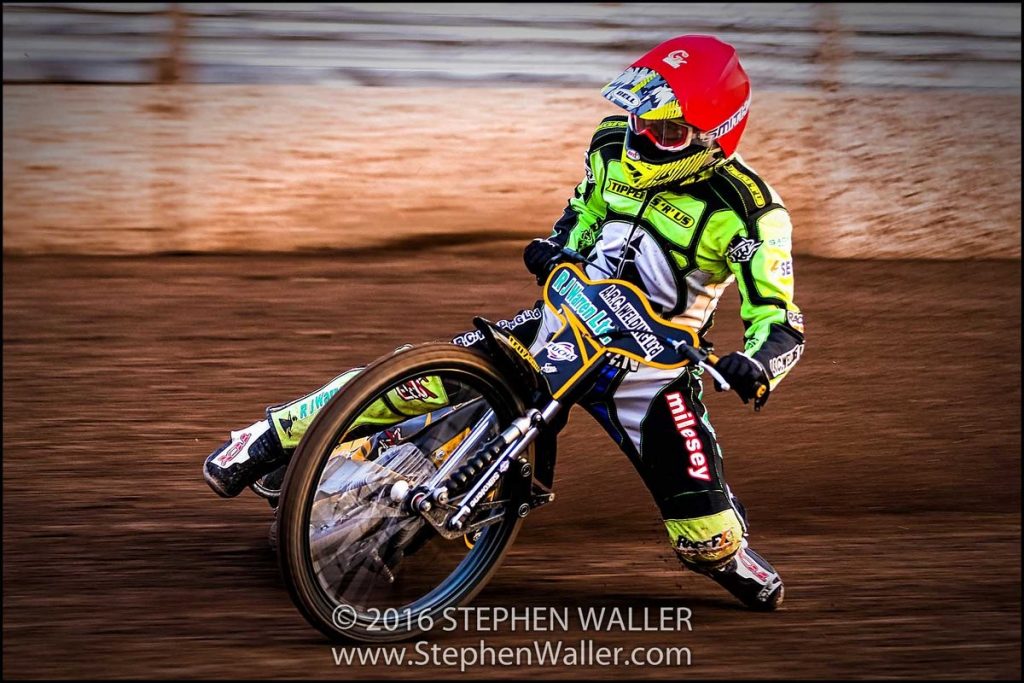 The ‘Tru7.com’ Witches fell to a 53-37 defeat at Somerset on Friday evening in the first leg of the Play-Off semi-final.

The Rebels were the stronger side on the night but the Witches battled all night to give them a realistic chance of overturning the 16-point deficit next Thursday at Foxhall. Danny King once again lef by example scoring 12 for the away side.

It was a disastrous start for the Witches as James Sarjeant went through the tapes at the first attempt of heat one. More woe followed as replacement Joe Jacobs did the same thing in the re-run and had to go from 15 metres in the third attempt of the opening heat. The Rebels hit the front in the third re-run and were untroubled to record a 5-1 to start their night in style. Jacobs enjoyed a better heat two as he passed Robert Branford on the fourth turn of the opening lap to take the win in a shared heat. It was all square after heat three as Morten Risager and Ben Barker got the away side’s first maximum of the evening to settle the nerves. However, the home side responded with another maximum of their own in heat four to give them a 14-10 lead.

Sarjeant’s night got worse in heat five as he fell whilst at the back on the third lap with Danny King and Charles Wright fighting it out at the front at the time of the stoppage. King made no mistake in the re-run winning comfortably. The home side flexed their muscle again in heat six though as Rohan Tungate and Jake Allen hit another maximum to extend their lead. Josh Grajczonek won heat seven but Risager and Barker were both in the points to ensure the lead was not extended further. Jacobs replaced Coles who was excluded for missing the two minutes in heat eight but Allen passed Jacobs to win with Branford in third for a 4-2 to the Rebels giving them a 29-19 lead.

Nico Covatti won heat nine to get his night going in an entertaining heat during which he had to exchange moves with Wright before getting the better of the home rider and taking three points. Tungate broke the tapes in heat 10 and went off 15 metres in the re-run. Risager led but was passed by Allen as Tungate caught Barker and passed him for third. However, Tungate then fell on the final bend allowing Barker back through to take third for a 3-3.  King was a winner once again in heat 11 as the points were shared. Wright won heat 12 as Barker fended off Branford for second but another heat advantage gave the Rebels a 42-30 lead with three to go.

King put in a captain’s performance in heat 13 to beat Grajczonek but with Covatti at the back the Witches couldn’t claw back any points. Coles was replaced by Jacobs again in heat 14 as he missed the two minutes and there was a bitter blow to follow for the Witches as Paul Starke and Branford hit a 5-1 to increase the lead to 16 points with a heat to go. Tungate got the better of King in the final heat but with Grajczonek retiring at the back, Barker claimed third to leave the final score 53-37 to the home side. The Witches must overturn the 16-point advantage at Foxhall next Thursday to progress to the final.

Team Manager Ritchie Hawkins admitted the score line was not ideal but is still optimistic the Witches can progress to the final.

“It was certainly not what we were looking for but we can still do it, why not? Everyone is so confident in our home form but it’s not ideal. We can definitely still turn it around,” said Hawkins.

“Certain riders didn’t get the rub of the green and we had one of those nights where a few had machinery problems at the wrong time. I don’t think it is through a lack of preparation so I can’t be too hard on them for that as I know a lot of extra preparation has gone into tonight. I feel they will be disappointed with that but to get a good result here (Somerset) you need everything to go right and it didn’t. I thought we fought so hard to keep the score as it was and it gives a chance next Thursday.”

Hawkins said it was just one of those nights for Sarjeant and backed him to come back stronger on Thursday at Foxhall.

“James had an absolute shocker and you get nights like that where nothing goes right for you. I’ve no doubt he will put it right on Thursday and he could be the one who has a great night on Thursday. His form has played a massive part in us making the Play-Offs. He’s had a shocker tonight but it’s gone now and we move on.”

The boss was once again full of praise for the captain who led by example and says the team are still full of confidence.

“We are led by the British champion and he has been exceptional on and off the track and I’m confident we will all be out there fighting for every point on Thursday. I didn’t need to get anyone’s heads up really as everyone believes they can go and win on Thursday and no one is doubting that.”

The second leg of this huge semi-final clash is at Foxhall Stadium next Thursday (13th October) at 7.30pm. KIDS GO FREE and why not get involved in the ‘Rattle the Rebels’ campaign led by Kevin Long. Kevin is urging fans to bring something along to Foxhall to make some noise for the boys (no air horns), in particular football rattles. We hope to see as many people on the terraces as possible for this massive meeting for the town.