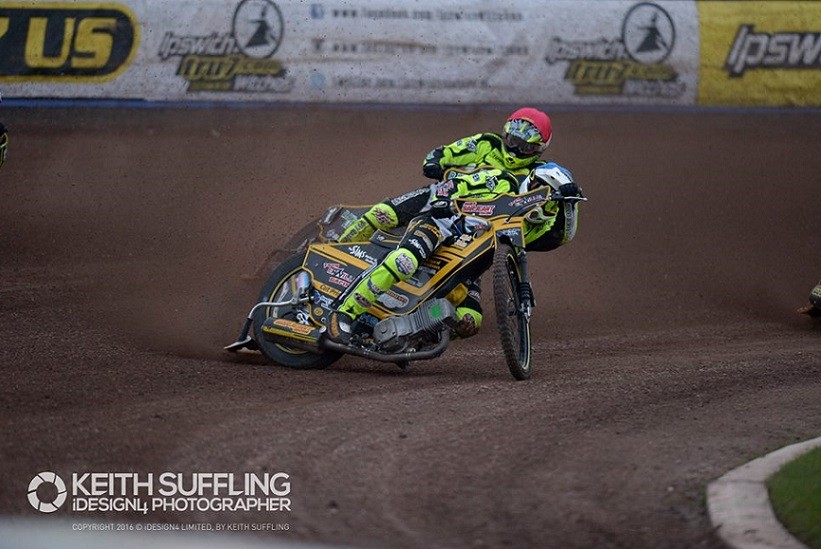 The ‘Tru7.com’ Witches narrowly beat the Rye House Rockets 46-44 in the first leg of the Knockout Cup First Round at Foxhall on Thursday evening.

The meeting was tight early on before the Witches got into their stride mid-meeting and looked to be building a healthy lead to take into the second leg when they were ten points up after 10 heats. The Rockets came on strong towards the end of the meeting though and left the tie finely poised for the second leg. Nico Covatti top scored for the Witches with 11.

Rye House captain Edward Kennett got the Rockets off to a good start in heat one winning from the tapes with partner Kasper Lykke in third for an early lead to the away team. Ben Morley won heat two ahead of the Witches pair of Paco Castagna and Darryl Ritchings to maintain the away side’s advantage. The Witches got their first 5-1 of the night in the following heat though courtesy of Lewis Kerr and Morten Risager. Kerr led from the gate but was being chased down by the returning Cameron Heeps, who on the first bend of the fourth lap dived under Kerr only to knock the Witches man off and was excluded with the heat being awarded by the referee with Risager given second. Covatti won heat four but partner Ritchings fell on the first turn meaning it was a shared heat that gave the home side a 13-11 lead.

It was level after heat five as Kennett won ahead of Risager and Lykke beat Kerr to third. Heat six was action packed as James Sarjeant and Danny King looked to be heading for a 5-1 with King team riding excellently in second until he fell on the first turn on the final lap. The skipper managed to get back up on the bike and beat Peter Karger to third and give the Witches the lead. Heat seven was a 3-3 as Covatti held off Heeps but the Witches extended their lead in heat eight thanks to Sarjeant and Castagna. Sarjeant was clear out in front with Castagna in second only for Lykke to pass the Italian on the first bend of the third lap but Castagna made a terrific cut back to get back past the Rockets man to join his partner at the front and give the Witches a six point lead after eight heats.

The lead got bigger as Kerr won heat nine with Risager in third for a 4-2 and the lead was then ten points for the Witches after Sarjeant held off Heeps to win heat 10 with King in third for another 4-2. The Rockets comeback began in heat 11 with the unbeatable Kennett winning heat 11 convincingly ahead of Covatti who swooped round Lykke on the fourth bend of the first lap to prevent a 5-1 to the away side. Kerr won again in heat 12 but with Castagna at the back it was a share of the spoils leaving the Witches 40-32 up.

Kennett was at it again in heat 13 winning in style but it was action packed behind him. Stuart Robson looked to be joining him for a Rockets maximum as he got past King on the second bend of the first lap but that left Covatti with room to nip up the inside of both of them into second and King then wound it on around the outside of Robson to claim third on the fourth bend and prevent a Rockets heat advantage. However, the away side did claim a heat advantage in heat 14 as Morley won and his partner Leigh Lanham looked set to join him for a 5-1 but Risager found a way past Lanham on the final bend to prevent a 5-1 and leave the Witches 45-39 up with a heat to race.

The Rockets did get their 5-1 in the final heat though as Robson won with Kennett behind him to complete his paid maximum on the night and leave the final score 46-44 to the Witches.

Team Manager Ritchie Hawkins was frustrated that his side could not kick on from a dominant position but  says it does not change anything as he targets a win at Rye House on Saturday.

“When we were ten points up it would have been good to kick on then and put another eight points on ourselves but they pulled eight points back so we’ve got to go there looking to win on Saturday,” said Hawkins.

“Even if we were ten points up I would expect our boys to go there looking for a win. They (Rye House) are not unbeatable at home and we are more than capable of winning there. We will take it as a one-off meeting and I’d rather be two points up than two down.”

The boss could not identify a specific reason the tide turned in the second half of the meeting but was pleased with the performances of Sarjeant and Kerr.

“There’s nothing I can put my finger on at the moment, it’s the small margins in speedway that make a big difference and we were very small margins away from getting a big win. I was really pleased with Sarj (James Sarjeant) tonight and Lewi had some good races as well so there’s no doubt in my mind we can do it on Saturday, it’s just a big task.”

Next Meeting: KOC 14th May vs Rye House (away)