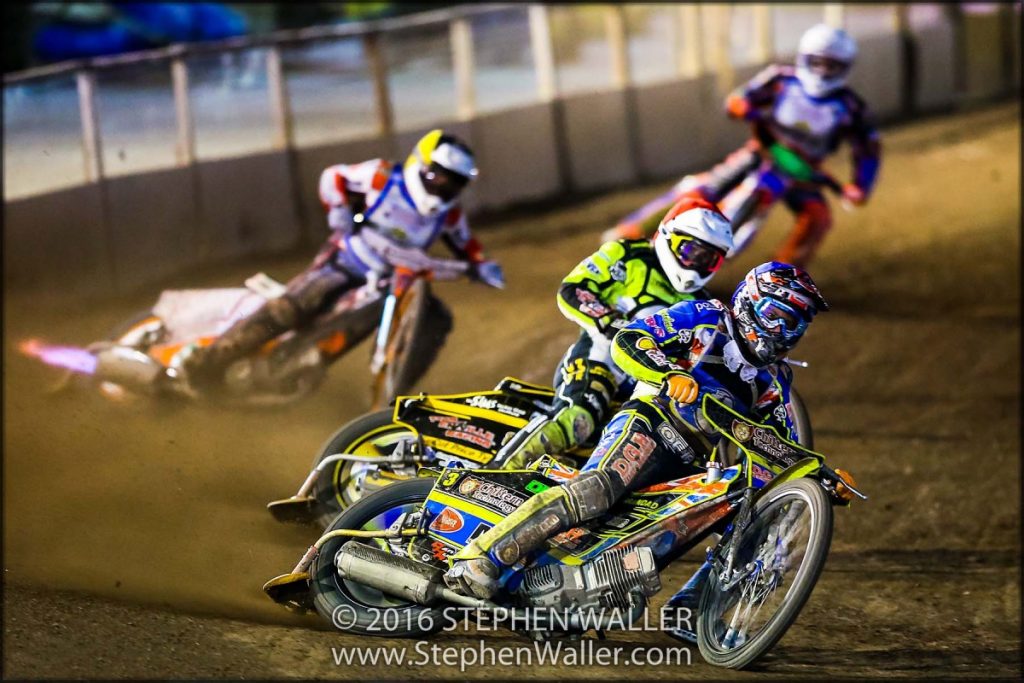 The ‘Tru7.com’ Witches were once again in top form as they thrashed the Sheffield Tigers 59-34 at Foxhall on Thursday.

The result was never in doubt right from the off as the home side dominated proceedings throughout as the Tigers had no reply all evening.  Danny King top scored for the Witches with 11.

Heat one was called back after movement at the start from James Sarjeant and Dimitri Berge but at the second attempt King flew from the gate with partner Sarjeant tucking in for a 5-1 to the Witches to start the night. Heat two was an entertaining heat as Arthur Sissis took an early lead only to be passed by Joe Jacobs coming out of the fourth turn on the first lap. Jacobs got himself into trouble later in the race locking up on the first and second turn but managed to stay out in front until Nathan Greaves produced a lovely move to take the lead on the final lap for a Tigers 4-2. There was another re-run in heat three after Kyle Howarth went through the tapes but managed to avoid his bike touching them and got away with a warning. Nico Covatti swooped round the lot in the first turn to take an easy win with Risager untroubled in second for a 5-1 to the Witches. Jason Garrity was a faller coming out of the second turn of the first lap in heat four and was excluded from the re-run. Danyon Hume was quickest from the tapes in the re-run and was helped home by Ben Barker in second for another maximum to give the Witches an early 17-7 lead.

The tapes were broken again in heat five as Berge anticipated the start and the Tigers man went off 15 metres in the re-run. Stead held off pressure from Covatti and Risager in the re-run for a first 3-3 of the night. King’s winning streak at Foxhall continued in heat six as he beat Garrity to the flag with Sarjeant in third for a heat advantage to the home side. Josh Bates was forced to go off 15 metres in heat seven after his chain guard fell off at the tapes, meaning he did not make the two minute time allowance. Bates had caught up with the field by turn two of the first lap though and passed Barker in third before locking up on lap two on the first and second turn, an incident which forced him to retire from the race. Jacobs was out front with Barker hunting down Howarth for second and the Witches man snatched second on the line for another 5-1 to the Suffolk side. It was easy in heat eight as Hume won again with Sarjeant coasting home in second for yet another maximum to make it 34-14 to the Witches.

Garrity had been forced to withdraw from the meeting after his earlier fall and the weakened Tigers were on the end of another maximum in heat nine as Risager and Covatti picked  up another five points. King was in fine form once again and won heat 10 ahead of Howarth but with Sarjeant in third it was another heat advantage to extend the lead for the Witches. Stead was sent out on a tactical ride in heat 11 for the away side but it was Barker’s turn to move at the start as all four were called back for a re-run again. Stead was quickest out of the gate and held off a strong challenge from Barker to pick up all six points for a 6-3. There was another heat advantage for the away side in heat 12 as Covatti couldn’t catch Howarth with Sissis in third for a 4-2 to the Tigers leaving it 48-27 to the Witches.

King’s incredible winning streak at Foxhall came to an end in heat 13 as Stead made the gate and King could not pass the Sheffield skipper as the points were shared. There was still time for the tapes to be broken again in heat 14 as all four were called back but it was more of the same in the re-run as the tapes were broken again with all four riders warned. Eventually the heat got underway and Risager won comfortably with Jacobs second for a big 5-1 to the home side. Stead could not be caught again in heat 15 as he held off Barker and Risager for the win that left the final score 59-34 to the Witches.

Team Manager Ritchie Hawkins says the team are in good form at the moment but adds that their efforts will be for nothing if they fail to win at Redcar on Friday.

“We look like a good team and all of the boys are in good form and if we make the play-offs we’ve hit form at the right time so we just need a massive performance tomorrow.”

Hawkins had praise for King’s fantastic Foxhall form after his unbeaten run was ended by Stead, meaning the run stopped at 30 consecutive race wins.

“Danny has been brilliant, he dropped a point to Steady (Simon Stead) who was flying tonight but he’s been great and hopefully he’ll carry that on over the next few weeks.”

Next Meeting: PL 9th September vs Redcar (away)