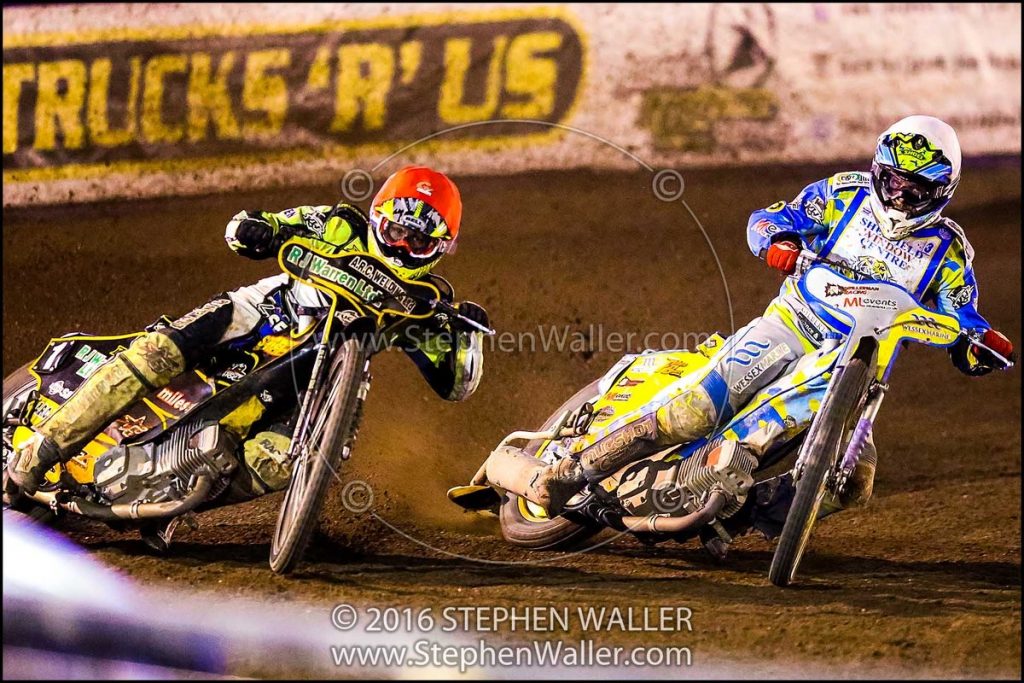 The ‘Tru7.com’ Witches recorded a vital 53-37 win at Redcar on Friday picking up all four points to push them into the play-off positions.

The Witches held a lead from the off and kept the narrow lead before coming on strong at the business end of the meeting to take a convincing win. Danny King was once again in fine form recording a five ride maximum.

The skipper got the away side off to a good start in heat one, storming to victory as James Sarjeant worked his way in to second getting past Tobias Busch on the fourth turn of the opening lap for a 5-1 to get things started. Heat two was stopped as Jye Etheridge fell after first bend bunching and all four riders were called back for the re-run. Joe Jacobs won in style as Danyon Hume joined him for a 5-1 to extend the early lead. However, the Bears hit back in heat three as Hugh Skidmore and Jonas B Andersen raced to a maximum despite the efforts of Kevin Doolan to split the pair. The home side pulled another two points back in heat four as Lasse Bjerre beat Ben Barker to the chequered flag with Hume a faller on the first turn leaving it 13-11 to the Witches.

King was unbeatable again in heat five in the first shared heat of the meeting . Jacobs was fast away from the tapes again in heat six as he took another win but Busch made sure it wasn’t a Witches 5-1 getting past Barker on the third turn of the opening lap. Risager produced a great ride in heat seven to get past Bjerre to take the win with Doolan picking up third for another 4-2 to the away side. The heat advantages kept on coming for Ritchie Hawkins’ side as Lee Payne missed the two minutes and was replaced by Etheridge for Redcar. In the re-run Sarjeant dominated but Busch was determined to prevent a 5-1 and passed Jacobs to limit the damage to just a 4-2 that left the Witches 28-20 up.

Andersen was a winner for the home side in heat nine but Hume and Barker kept Skidmore at the back for a shared heat. The Bears got back into the meeting in heat 10 as David Bellego and Busch hit a 5-1 to reduce the Witches lead to just four points. However, the Witches were determined to get the win and responded in heat 11 as captain King and Sarjeant stormed to a maximum to give the away side breathing space again. Etheridge was excluded in the first attempt of heat 12 as he fell after a tight corner. The Witches capitalised in the re-run as guest Doolan and Jacobs recorded another 5-1 to put the Witches on the brink of victory, 42-30 up with three heats to go.

The meeting was won in heat 13 as King’s stunning night continued with a win ahead of Bjerre with Bellego falling on the third lap meaning the heat was awarded as a 4-2 to the away side which clinched victory. Risager was at it again in heat 14 passing Andersen to get his second win of the night in a shared heat. King completed his maximum in heat 15 as he swooped round Andersen on the fourth turn of the third lap to take the win with Jacobs third for a 4-2 that gave the Witches a vital 53-37 win.

“I’m super proud of all of the lads tonight,” said Hawkins. “The pure determination each and every one of them showed out there was fantastic and it was a real team effort from everyone. The boys really want to make the play-offs and it’s a pleasure to watch at the moment. Our focus now turns to two huge meetings against Newcastle next week.”