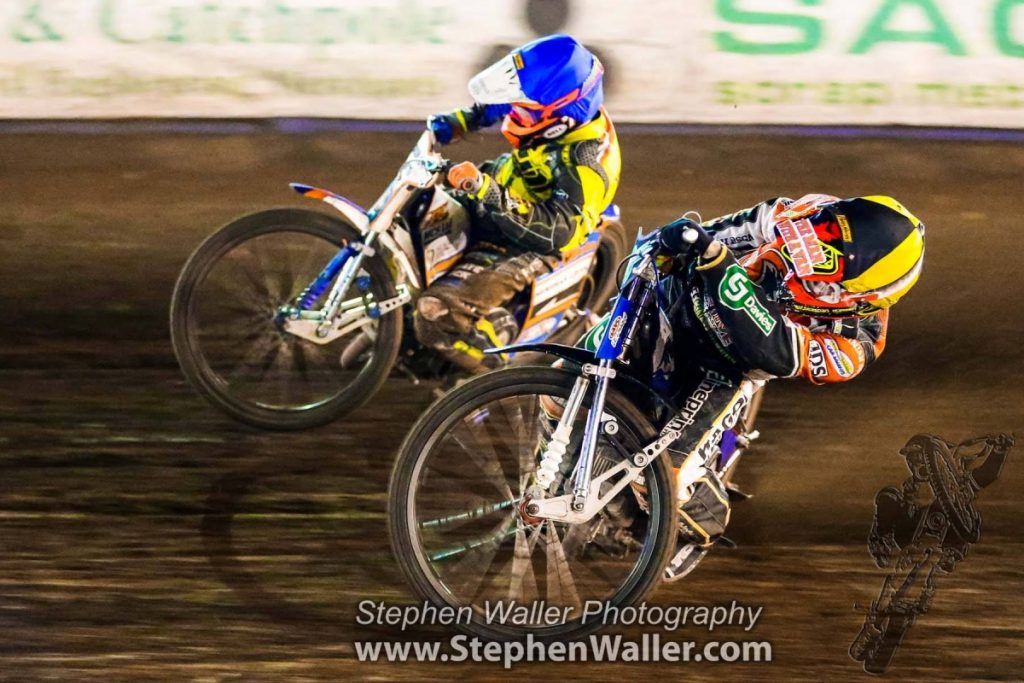 The ‘Tru7.com’ Witches agonisingly lost the Knockout Cup final at Foxhall as injuries struck again during a 45-45 draw at Foxhall on Thursday.

Following a 47-43 defeat at the East of England Arena and Events Centre on Sunday, the Witches had four points to make up at Foxhall and they had cancelled that out after five heats following a positive start to the meeting. However, once again injuries struck and captain Danny King was ruled out of the meeting following a bad fall in heat six, leaving the Witches with it all to do once again. As they have done all season the home side battled on with five riders and were in with a chance of levelling the overall score going into the final heat but the Panthers had enough to see it through and lift the Knockout Cup. Cameron Heeps top scored with 13+1.

King flew from the gate in heat one as he cruised to victory with Kyle Newman picking up third for a heat advantage to start proceedings. The positive start continued in heat two as Nathan Greaves was quickest from the gate and won in a shared heat. Heat three was called back after Paul Starke jumped the start and the visiting rider was warned to keep still at the start. Cameron Heeps made the gate in the re-run as Newman chased Ulrich Ostergaard in second. Newman wound it on to try and pass the Panthers man on the third turn of the third lap but overcooked it and fell, meaning a shared heat. Home guest Scott Nicholls won heat four comfortably ahead of Chris Harris but Jack Parkinson-Blackburn rounded Connor Mountain on the fourth turn of the second lap to prevent a heat advantage to the Witches, leaving the Witches 13-11 up and just two points down on aggregate.

Heeps won heat five ahead of Ben Barker as Newman worked his way into third on the second lap for a 4-2 that levelled the scores on aggregate. It was heat six where it all went wrong for the home side. The Witches pair of King and Greaves made the gate but Greaves got out of shape exiting the second turn and clipped the back wheel of King which sent him through the fence on the back straight as Foxhall fell silent. The ambulance came onto the track to see to the captain with an early interval called as the paramedics saw to King with Greaves excluded. The 2016 British champion was withdrawn from the meeting with a suspected broken wrist, leaving the Suffolk side with it all to do. Connor Mountain replaced King in the re-run as Harris won but the Witches reserve held second to limit the away side to a 4-2. Nicholls won heat seven from the gate as Greaves fell on the opening lap meaning a shared heat. Greaves won heat eight as Heeps missed the start but the Australian worked his way through the traffic to join his teammate for a 5-1 that put the Witches 27-21 up on the night and up on aggregate by two points.

Heeps and Newman made the gate in heat nine but Harris bided his time to pass Newman on the second lap to take second and limit the home side to a 4-2. Starke and Ostergaard eased to a 5-1 in heat 10 against the Witches reserves to level the scores on aggregate. Barker made the gate in heat 11 and won by the smallest of margins as Nicholls swooped on the final bend to get the win but missed out by a tyre width. Simon Lambert had passed Mountain earlier in the race to take third meaning a 4-2 to the away side to put them back ahead on aggregate. Starke made the gate in heat 12 as Heeps and Greaves were both in the points for a 3-3 that left the Witches 37-35 up on the night but two points down on aggregate.

Heat 13 was called back as Nicholls jumped the start, as the tension went up another notch. Harris won the re-run as Nicholls passed Barker on the second lap to split the Panthers pair but a 4-2 edged the visitors closer to victory. Nerves got the better of Greaves in heat 14 as he touched the tapes and was excluded with Mountain coming in to replace him in the re-run. Lambert won at the second attempt as Newman took second and Mountain held onto third to keep the Witches’ slim hopes alive, needing a 5-1 in the final heat to level the scores. Nicholls won heat 15 but Heeps fell on the final lap whilst trying to get amongst the points, meaning a 3-3 that secured Peterborough’s victory on aggregate.