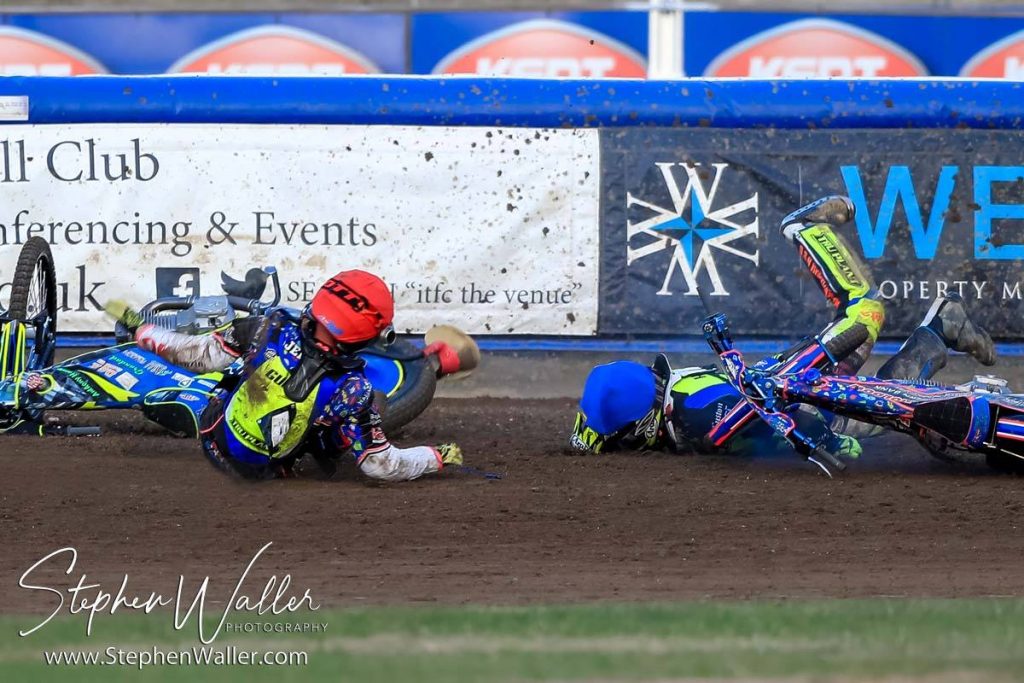 The ‘Tru Plant’ Witches had a night to forget as they were beaten 43-47 at Foxhall by Workington in the Championship and picked up two more injuries along the way.

There was nothing to separate the two sides for the first nine heats as heat advantages were at a premium but after a heat eight collision between Danyon Hume and Jonas Jeppesen there was a lengthy delay to proceedings as Hume was taken to hospital with a suspected dislocated shoulder as both riders were subsequently withdrawn. That left the home side with just four fit riders and despite battling on the task was too big and the away side sealed the win in the final heat. Witches guest Scott Nicholls and Rory Schlein top scored with 12+1.

Mason Campton made the gate in heat one but Schlein made his way to the front early on but partner Connor Mountain couldn’t hang onto third for a 4-2 as he was passed on the last lap by Rene Bach. Rasmus Jensen won heat two and was joined by partner Kyle Bickley but Mountain passed Bickley for second on the second lap as Hume was a faller at the back meaning the Comets went ahead. Nico Covatti went through the tapes in heat three and was forced to go from 15 metres in the re-run. Campton held on for the win in the re-run despite pressure from debutant Jeppesen but Dan Bewley was caught by Covatti and then fell meaning a 3-3. It was Nicolai Klindt’s turn to touch the tapes in heat four and he went from 15 metres in the re-staging. Jensen made it two wins from two beating Witches guest Nicholls and it was another shared heat that left the away side 11-13 up.

Heat five was stopped with Campton warned for moving at the start and Covatti was a winner in the re-run but the home side just couldn’t find a heat advantage in the early stages. However, the home side did find one in heat six as Schlein and Hume rode to a 5-1 to put the Witches ahead for the first time in the tie. Nicholls won heat seven but it continued to be a tight encounter with both Comets riders in the points. Hume led heat eight for the majority of the race but was passed by Campton at the end of the third lap and then the Witches reserve fell at the start of the final lap with Jeppesen unable to avoid his partner and both riders fell with Hume excluded. The race was awarded as a 4-2 to the away side to level the scores at 24-24 as Hume received treatment from the medical staff.

Hume was withdrawn from the meeting and taken to hospital with an arm injury leaving the Witches with five men for the rest of the meeting. After a lengthy delay to proceedings action got back under way with heat nine and Covatti won a shared heat. The away side took the lead in heat 10 as Klindt beat Schlein and Bewley held off Covatti for third for a crucial 4-2. Nicholls won heat 11 but once again the away duo were both in the points to deny the Witches a heat advantage. Jeppesen then had to withdraw from the meeting with a hand injury following that crash in heat eight with Hume, leaving the Witches with just four riders now. Jensen came in as a reserve substitution and won again in heat 12 ahead of Covatti as Bewley passed Mountain for third for a Workington 4-2 to put them 34-38 up with three to race.

Just as the home side looked down and out, Nicholls and Schlein produced a massive 5-1 in heat 13 to level the scores with two to race and give the home side hope of a great escape. With Hume and Jeppesen withdrawn, the home side could only field Mountain in heat 14 and it was a 5-1 to the away side thanks to Bewley and Jensen to put them on the brink of victory. The away side sealed the win as Klindt won the final heat of the night to give them a 47-43 win and three Championship points.

Ipswich Sports Club and RN Euston Riders of the Night 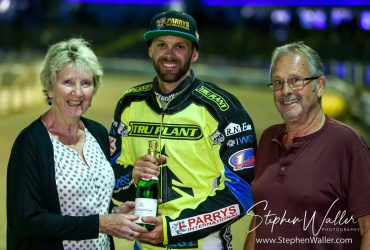 Sadly, like at Sheffield last week, injuries had a big impact on the tie. With nothing between the sides it could have gone either way but after the crash between Hume and Jeppesen in heat eight, it gave the visitors a big advantage. Not only did they level the scores in that heat with a 4-2, the Witches lost two riders, leaving them with a mountain too steep to climb and the away side took full advantage to see out the win in the remaining heats.

The Witches are next in action at Edinburgh on Friday 13th July in the Championship.