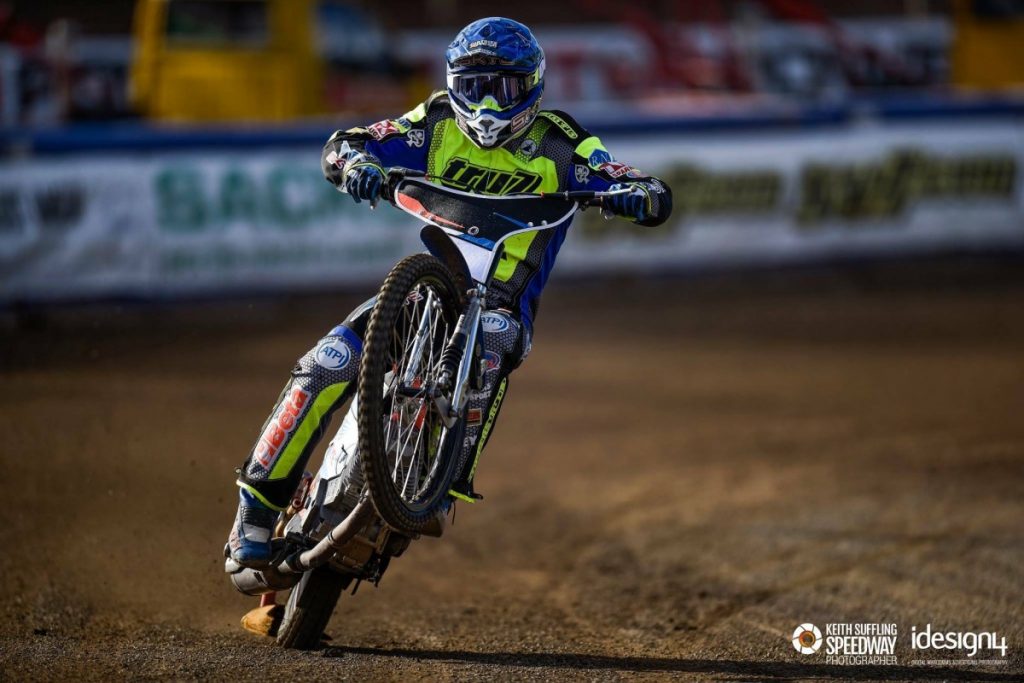 The ‘Tru7.com’ Witches were in dominant form on Thursday night to beat Berwick Bandits 60-30 at Foxhall in the first leg of the Knockout Cup.

The home side were rampant from the off and the result was never in doubt as the Witches hit heat advantage after heat advantage to build a healthy lead to take to Berwick on Saturday. Rory Schlein went through the card to score 15 as Danny King recorded a paid five-ride maximum too.

King wasted no time in getting going for the evening as he smashed the track record in heat one (55.5) to beat opposite number Lewis Bridger with James Sarjeant chasing all the way but having to settle for third place for a 4-2 to the home side. Witches reserve pairing of Danyon Hume and Connor Mountain were quickest from the start in heat two as they recorded the first 5-1 of the night for the Witches as Bandits guest Danny Ayres fell late on in the race. Nico Covatti romped to victory in heat three but Cameron Heeps suffered mechanical troubles on the start line meaning the first shared heat of the evening. Heat four had to be stopped when Bandits reserve Ryan Blacklock fell on the first lap. Schlein won the re-run with Kevin Doolan and Hume battling all the way for second with the Australian just pipping the Witches youngster on the final bend to limit the damage to a 4-2 and leave the Witches 16-8 up.

The Witches onslaught continued in heat five as Covatti and Heeps raced to the home side’s second maximum of the night to extend the lead to 12 points after just five heats. The Bandits had no answer to the Witches’ start as King and Sarjeant banged in another 5-1 in heat six as the tie began to run away from the Bandits. Heat seven was re-started after an unsatisfactory start due to movement from Claus Vissing but it was another heat advantage for the Witches in the re-run. Schlein showed his class to pass Vissing going into the third bend on the first lap as his partner Mountain did the same to Dimitri Berge in third. The Bandits did get their first heat advantage of the night in heat 8 as Liam Carr was awarded the race win ahead of Sarjeant with Hume falling late on in the race. That left the Witches 32-16 up.

The Witches looked set to extend their lead on the night further as Covatti and Heeps were out front in heat nine but misfortune struck as Covatti packed up on lap two meaning a share of the spoils. The home side did add another two points to their lead in heat ten as King continued his fine start to the season with another win with Sarjeant in third. Schlein continued his perfect night in heat 11 as Bridger battled with Mountain for second with the Bandits rider coming out on top in another heat advantage to the Witches. The home side looked set for another 5-1 in heat 12 as Covatti and Hume hit the front but the Bandits avoided more punishment after the Witches reserve Hume almost went 360 but managed to stay on the bike to complete the race. The away side found themselves 46-26 down with three to race.

Bridger went through the tapes in heat 13 forcing him to go off 15m in the re-run. Schlein and King made no mistake in the re-run and raced to another 5-1 on the night. Heat 14 was stopped after Blacklock was in the wars again, falling on the opening lap. Vissing was then excluded from the re-run for delaying the start and was replaced by Ayres. Heeps won at the third attempt with Mountain third for a 4-2 to make it 55-29 with one heat to race.

The Witches finished in style with a 5-1 as Schlein and King completed their respective maximums to make the final score 60-30 to the Witches ahead of Saturday’s second leg clash at Berwick.

Next Meeting: KOC 1st April vs Berwick (away)