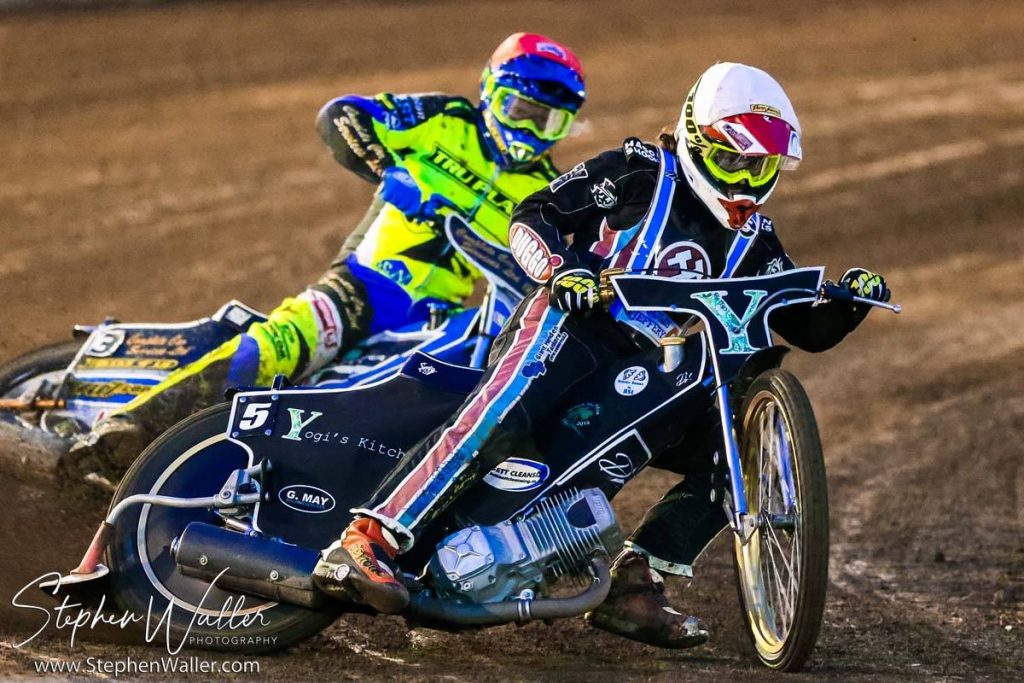 The ‘Tru Plant’ Witches exited the Knockout Cup on Friday evening at Lakeside as they were beaten 49-41 in the second leg despite a battling performance with three riders absent due to injury.

It was a terrific performance from the depleted Witches who went into the meeting without the injured trio of Danny King, Nico Covatti and Michael Härtel. The Hammers cruised through to the next round 103-76 on aggregate after their big win at Foxhall on Thursday but the Witches battled on throughout the night and made the home side work hard for their victory. Rory Schlein top scored with 12+1 as Connor Mountain impressed again at the Arena Essex Raceway scoring 12.

Nick Morris won heat one for the home side and Ben Morley was in second before Witches guest Eddie Kennett passed the youngster to split the home pair on the second lap. Heat two was stopped as the returning Zach Wajtknecht fell on the second bend whilst at the front and he was excluded from the re-run. The Witches took full advantage in the re-run as Mountain and Danyon Hume hit a maximum for the away side. The lead was short-lived though as the Hammers responded in heat three with the powerful duo of Adam Ellis and Kyle Newman recording a 5-1. Richard Lawson continued his good form with a win in heat four ahead of Schlein and Hume kept Alfie Bowtell at the back for a shared heat, leaving the home side 13-11 up and 67-46 in front on aggregate.

It was the pairing of Ellis and Newman that did the damage again in heat five as the home side extended their lead with another 5-1. Mountain was the early leader in the heat before he was passed at the end of the first lap by Ellis and then Newman got his way into second on the following lap. The Witches reserve never gave up and regained second on the final lap but Newman hit back on the home straight to make sure of the maximum. Schlein won heat six as Mountain was passed for second by Morris on the second lap but it was a Witches 4-2 heat advantage. Lawson won heat seven ahead of Heeps as Wajtknecht picked up third for a Hammers 4-2. Morley took the chequered flag in heat eight ahead of Heeps and Hume as a 3-3 made the score 27-21 to the Hammers and 81-56 on aggregate.

Schlein won again in heat nine in a shared heat as he was chased hard by Ellis. Heat 10 was called back after an unsatisfactory start and Morris was a clear winner in the re-run as Mountain continued to show his liking for the track with an impressive second as the Essex side hit a 4-2. Lawson made it three wins from three in heat 11 as Kennett had to work hard for second but with Wajtknecht third it was another 4-2 as the hosts extended their lead on the night to 10. Ellis won heat 12 but with Mountain and Heeps both in the points it was a share of the spoils making it 41-31 to Lakeside who had a 95-66 lead on aggregate.

The away side kept on battling though despite being out of the competition and hit a 5-1 in heat 13 thanks to Kennett and Schlein who won the battle for second with Morris.  Mountain ended his night on a high with a race win in heat 14 ahead of Newman as Hume fell whilst at the back. Morris won the final heat of the night ahead of Schlein as Lawson picked up third to make the final score 49-41 on the night and 103-76 on aggregate.

Mountain was once again the star in Essex scoring 12 from reserve including two heat wins in a heat two 5-1 with Hume and he then beat Newman to the finish line in heat 14.

With the tie all but over it was not so much a key moment but seeing the Witches continue to fight throughout and hit a 5-1 in heat 13 thanks to Kennett and Schlein showed what spirit the team have.

The ‘Tru Plant’ Witches are back in action on Sunday 6th May when they travel to Newcastle for Championship fixture.