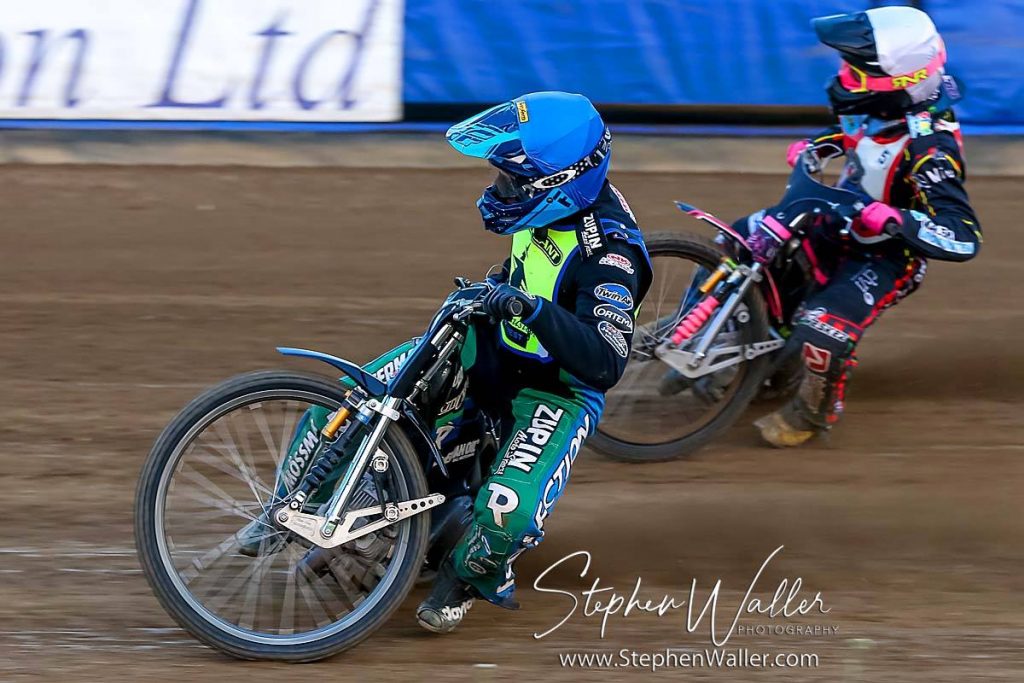 The ‘Tru Plant’ Witches recorded their first away win of the season with a 49-41 win over Redcar in the Championship on Thursday.

The meeting swung back and forth with both sides landing blows in the first eight heats but there was nothing to separate the pair going into the second half of the meeting. The Witches then hit back to back 5-1’s in heats 10 and 11 and secured a four-point win with a 5-1 in heat 15. Guest Ty Proctor top scored with 10+1.

It was a bad start for the visitors as Rory Schlein suffered an engine failure whilst in second on the opening lap, leaving Tobias Busch and Ben Barker to record a 5-1 for the home side. Mikkel B Andersen was a faller in heat two but his partner Jordan Stewart won meaning a shared heat. The Witches levelled the score in heat three as Mark Riss won and Nico Covatti passed Jonas B Andersen on the line to seal the maximum. Thomas Jorgensen rode well to win heat four as he went up the inside of both Proctor and Coty Garcia at the start of the second lap to ensure a 3-3 that left things all square at 12-12.

The away side went ahead in heat five as Cameron Heeps won and Schlein worked his way through the traffic to join his compatriot at the front for a 5-1. Barker won heat six ahead of Proctor as Busch got third for a 4-2 to the Bears. Jorgensen and Covatti enjoyed a good battle in heat seven as they traded moves at the front with the home man coming out on top eventually in a shared heat. The hosts were level again after heat eight as Busch won but Heeps split the home pair to limit them to a 4-2 taking the score to 24-24.

As the rain started to fall, Redcar then went ahead in heat nine as Dimitri Berge passed Proctor to win with Jonas B Andersen in third for a heat advantage. The meeting continued to swing from one way to the other and the visitors then re-took the lead in heat 10 as Covatti and Riss hit a maximum. The Witches made it back to back maximums in heat 11 as Schlein won and Heeps passed Jorgensen at the end of the second lap to extend their lead. Barker came in as a tactical substitute in heat 12 and won ahead of Covatti as Berge got third in an action packed 4-2 to the home side that left the score 34-38.

Jorgensen won heat 13 after passing Schlein early on and he had to hold off a strong challenge by Proctor on the line as the points were shared. Riss won heat 14 after passing Stewart at the end of the second lap in another 3-3 that left the away side on the brink of victory. Schlein and Proctor made sure of the win in heat 15 with a 5-1 that gave the Witches a 49-41 win and four Championship points.

There were plenty of key contributions on the night but Riss continued his excellent start to his Witches career scoring 9+2 from four rides and the pairing with Covatti proved to be fruitful on the night.

With the Witches leading by just two points after a 5-1 in heat 10, Schlein and Heeps’ maximum in heat 11 was a body blow to the home side and put the away side in control for the first time in the meeting as they saw out the win in the final four heats.

The Witches are next in action at Foxhall against Lakeside on Thursday 2nd August in the Championship.