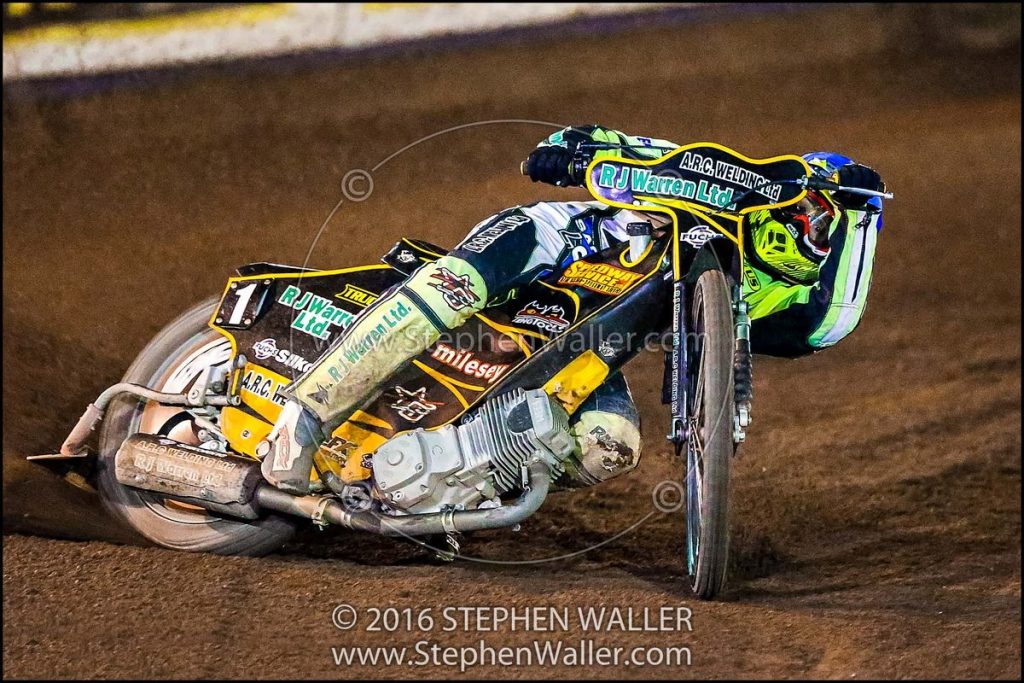 The ‘Tru7.com’ Witches were in stunning form once again at Foxhall to obliterate the Workington Comets 69-23 on Thursday.

It was a one sided affair from heat 1 to heat 15 as the Witches trounced the visitors who had no reply all evening. Danny King recorded his sixth straight maximum at Foxhall scoring 15.

King and Sarjeant set the tone in heat one with a 5-1 from the gate before there was a faller in heat two as Matt Williamson came off whilst leading, causing Danyon Hume to crash whilst trying to avoid the Comets man. The re-run will live long in the memory for Hume who won his first heat in Witches kevlars. Adam Roynon made the gate before Joe Jacobs passed the visiting rider on the back straight and then Hume rounded the pair of them on the home straight to lead and take the victory for a Witches 5-1. Nico Covatti won heat three as Morten Risager held off Rasmus Jensen for second and another 5-1. Ben Barker took the chequered flag in heat four with Hume third for another heat advantage that gave the Witches a 19-5 lead.

Ricky Wells was sent out on a tactical ride for the Comets in heat five but he could not get the better of Covatti who won with Risager in third to cancel out the tactical ride for a 4-4. It was back to the 5-1’s in heat six as King and Sarjeant eased to another maximum. They just kept on coming all night as Jacobs and Barker became the latest pairing to hit a 5-1 in heat seven with Barker protecting his partner all the way round just to make sure of the points. Sarjeant was a winner in heat eight but it was Hume who caught the eye as he chased Mason Campton in second and passed the Comets man on the third lap to join Jacobs at the front and put the Witches 38-12 up.

Covatti and Risager coasted to another 5-1 in heat nine before King and Sarjeant followed suit in heat 10. It could have been another in heat 11 as Barker and Jacobs made the gate but the latter lifted coming out of the second turn allowing Wells into second and the home side had to settle for a 4-2. Covatti completed his maximum in heat 12 with another win as Hume was amongst the action again, passing Roynon for third on the second lap leaving the score rather one-sided at 56-18 to the Witches.

Wells made the gate in heat 13 but King passed the American on the second lap and on the final lap Barker also passed the Comets captain who fell to compound the away side’s misery. The 5-1 meant Barker completed his own paid maximum on the night. The away side finally produced a heat winner and it was a great ride by Jensen who prevented another 5-1 to the home side after he passed Jacobs for second on the second lap before then hitting the front after passing Risager on the third lap for a 3-3.

Wells made the gate in heat 15 but King was having none of it and passed him going down the back straight making room for Sarjeant to come through into second for another 5-1 to round the night off and leave the final score 69-23 to the Witches with King completing a five-ride maximum and Sarjeant completing a five-ride paid maximum.

Team Manager Ritchie Hawkins was once again delighted with the performance and says confidence is high in the team.

“Workington struggled but we rode really well,” said Hawkins. “The string of home meetings has really helped us. It’s a great shame we didn’t have that at the start of the year. Confidence is high especially at Ipswich and it was another dominant performance.”

Hawkins had praise for a number of his riders who managed to break their own individual records in the meeting.

“It was a night of firsts really; that was the first maximum Nico has ever had in British Speedway and I think it was Sarj’s (James Sarjeant) first paid 15 point maximum and obviously Danyon got his first heat win. I’m really pleased with everyone and it’s not very often you go through a whole meeting where you don’t run a last.”

Hume continues to impress the Foxhall management and the boss says he is improving every week.

“It was a massive improvement from last week for Danyon and he gets better every week and made a couple of good passes which were the highlight of the night really.”

The Witches hold the final play-off spot at present but Hawkins says the picture will be clearer after next Thursday at Redcar.

“We’ve got to win at Redcar and then we’ve got a little break in our fixtures so we will know more after that. Our points difference has been helped over the past few weeks at home but our focus is now on Redcar.”

Next Meeting: PL 25th August vs Redcar (away)