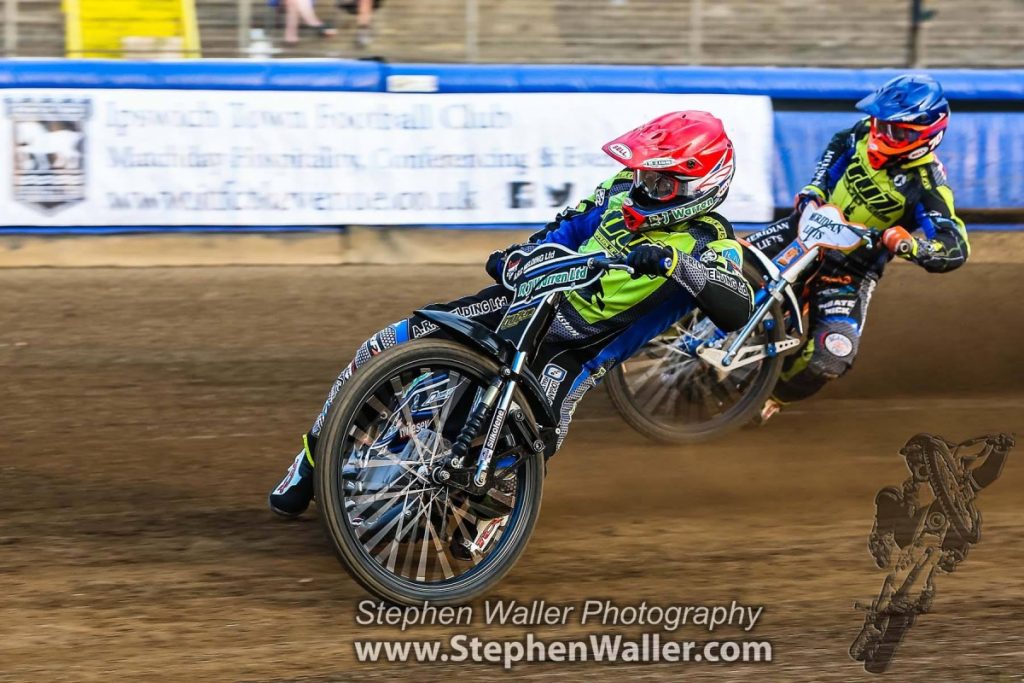 The ‘Tru7.com’ Witches reached the final of the Championship Fours at Peterborough on Sunday but could not make an impact at the last hurdle, finishing fourth as the hosts took victory.

Ipswich eased through to the final after a dominant semi-final performance saw them top the second semi-final by five points. After such a promising start to the afternoon the Witches could not replicate their earlier form in the final and finished a distant fourth.

In the first semi-final of the day Sheffield took the victory to book their place in the final with hosts Peterborough joining them much to the delight of the locals. It was then the turn of the Witches in the second semi-final, backed by a strong travelling support at The East of England Arena.

Heat one was stopped after Newcastle’s Ashley Morris hit the fence of the back straight on the opening lap and was excluded. In the re-run Redcar’s Jason Garrity had mechanical issues at the start as Justin Sedgmen picked up two points for the Witches with Richard Lawson taking the win for Glasgow. Danny King picked up another two points in heat two as Newcastle’s Steve Worrall took the chequered flag. Heat three was called back after movement at the start but Rory Schlein did the business for the Suffolk side, winning easily and putting the Witches in the lead. The Witches sat heat four out as Kevin Doolan won for Berwick with Ben Barker excluded for Redcar as both of his wheels crossed the white line. Much to his disappointment, he sprinted across the centre green to show his tyre marks and attempt to prove his innocence. The Witches were back out in heat five and Cameron Heeps won comfortably to strengthen Ipswich’s grip on the semi-final, as they lead on 10 points, four ahead of Glasgow.

Garrity went through the tapes in heat six and was replaced by Ellis Perks for Redcar. Schlein produced a stunning back straight on the opening lap as he catapulted himself from third to first going into the third turn and didn’t look back taking another three points. Heeps took a point in heat seven as Worrall won again for Newcastle. Redcar got themselves back in the hunt in heat eight as Charles Wright won, passing David Howe of Berwick to take the win. Jye Etheridge fell on the first turn of heat nine as all four were called back. Etheridge then went through the tapes and was replaced by reserve Luke Ruddick. Barker won for Redcar as King picked up a point, with the Witches already safely in the final. Sedgmen won heat 10 in style for the Witches as he eyed up Stuart Robson before swooping round him to take the win and put Ipswich into the final in emphatic style with Redcar joining them by a point thanks to Sedgmen’s pass on Robson of Newcastle.

Chris Harris won heat one of the final for the Panthers as Sedgmen claimed a point thanks to some machinery problems for Sheffield’s Josh Grajczonek who retired whilst in second. Wright won heat two for Redcar as Schlein ran a last. Ulrich Ostergaard won for the hosts in heat three as Heeps couldn’t make an impact at the back. King got Ipswich back in the final with a convincing win in heat four but they had work to do to catch early leaders Peterborough.

Wright was a winner again for Redcar in heat five as Heeps struggled at the back for the Witches. Harris continued his perfect afternoon with a win in heat six as Schlein pulled off a hard move to take second from Sheffield’s Todd Kurtz. Howarth won heat seven for the Tigers as Sedgmen finished at the back, leaving the Witches needing a miracle. Heat eight was a stunning speedway race as home man Ostergaard passed King and then Garrity to lead before King came back for more but the home rider wasn’t to be stopped and came back to win with King having to settle for third behind Garrity. The Panthers led with 17 with the Witches in fourth with just seven points.

Harris then produced another stunning heat as he went from the back to win heat nine as Schlein couldn’t get amongst the points. Starke won heat 10 to seal victory for the hosts as King picked up second. Heat 11 was re-run after Garrity jumped the start and the re-run was another classic. All four riders were battling it out at the front but once again it was Ostergaard who came up trumps for the hosts to win as Heeps claimed third. Sheffield’s Grajczonek won the final heat of the day as Sedgmen finished at the back but it was a dominant performance from Peterborough in the final as they were crowned champions on home soil.