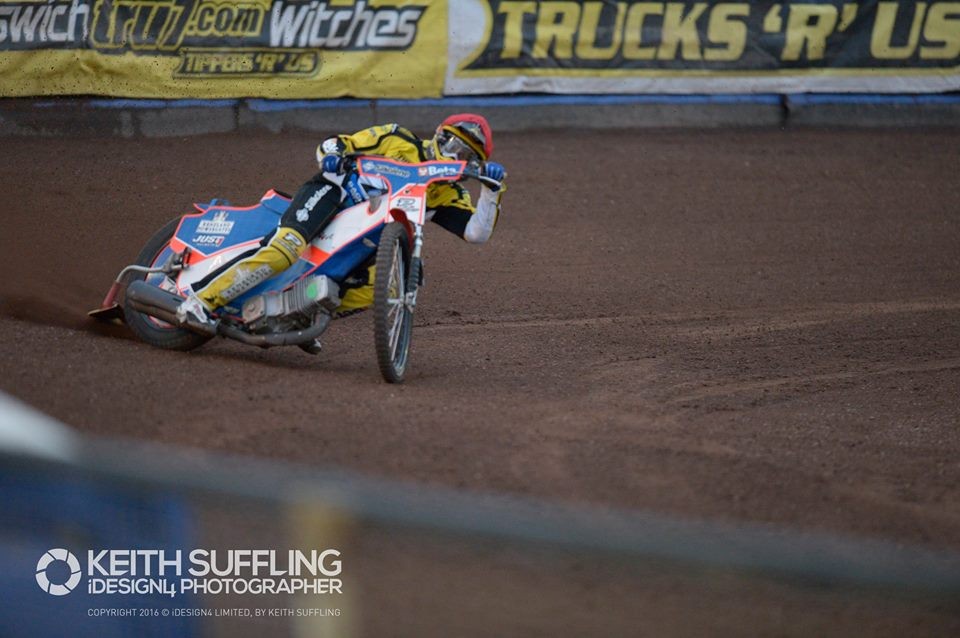 The ‘Tru7.com’ Witches suffered a disappointing early exit from the Premier League Fours at Peterborough this weekend.

The Witches were placed in a group alongside holders Edinburgh, Rye House and Berwick but never got going on the day and limped out at the semi-final stage, well behind the leaders.

In sweltering conditions the Witches faced a long wait until they took to track being in the third semi-final of the day. Workington progressed from semi-final one after a dramatic final heat that saw them go through to the final on countback at the expense of Glasgow. Plymouth dominated semi-final two to cruise through to Sunday’s final before it was the turn of the Witches.

Things started brightly enough for the Witches as Nico Covatti picked up two points in the opening heat as Edinburgh’s Sam Masters was too quick out front. Ben Barker was involved in a battle for third in heat two with Kevin Wolbert as the pair passed and re-passed each other but the Monarchs man came out on top to take the point. Morten Risager put in an impressive performance in heat three passing Ryan Fisher to take second on the first bend of the third lap. Heat four caused a shock as Danny King found himself at the back from the gate and the skipper tried everything to get into the points but couldn’t find a way past to leave the Witches bottom of the semi-final with four points after four heats.

King was back out in heat five as he and Masters had a battle at the front passing and re-passing with the Australian again proving to have too much on this occasion. Covatti picked up a point in heat six before the heat of the night in heat seven. Barker and Fisher enjoyed a titanic battle trading moves for four laps before Fisher got past, pushing Barker wide but somehow the Witches man managed to stay on the bike, riding the fence to claim two points. Risager failed to get amongst the points in heat eight leaving the Witches with a mountain to climb to progress with just nine points.

Risager again found himself out of the points in heat nine which meant the Witches’ chances of progressing were over. Barker gated in heat ten but drifted too wide with Fisher in his sights leaving the inside for Stuart Robson and Matthew Wethers which demoted Barker to the back and he was never able to recover. Covatti collected another respectable second in heat 11 before King won heat 12 at a canter but it was too little too late the Witches who were knocked out a the first hurdle.

“We weren’t good enough, the effort was there but we just were not good enough,” said Hawkins. “It summed up our season really and today was a massive disappointment. I felt we should have been a real contender this weekend.

“We were just not good enough and that is the hard facts, we weren’t quick enough and we didn’t perform on the day and it’s disappointing.”

Nico Covatti and Ben Barker will represent the Witches in Sunday’s individual event and the boss hopes the pair can give the Witches fans something to cheer.

“It would be good to see Nico and Ben give the Witches fans who have travelled down for the weekend something to cheer about, so hopefully they go well tomorrow. Nico was out best rider today and Ben needs to get the laps in and sort his engines and equipment out as he has had a hell of a job with his engines, so we will see if he can progress with that.”

Despite the disappointment Hawkins believes the new format proved to be a success.

“I think on the whole it was a great success with different things being tried this year and it was a decent crowd and hopefully there will be more for the Final and it will be a successful event.”